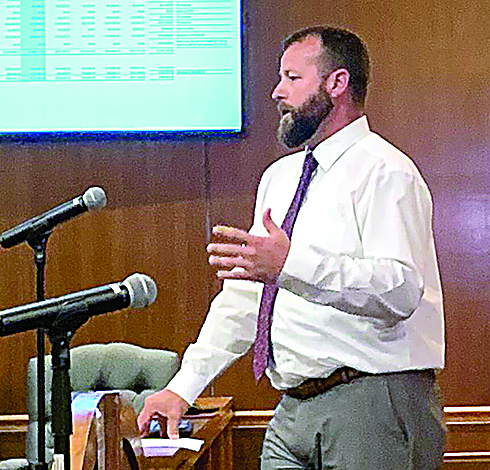 THINKING AHEAD — Steubenville Water Superintendent Jim Jenkins is hoping to be able to set money aside for major expenses in the near future. -- Linda Harris

Jenkins told council during a budget hearing earlier in the week that going forward, he’s hoping they can earmark $308,000 a year for tank and reservoir maintenance. He said the money would still be available in an emergency — such as a major system failure like the one the city experienced in 2018. But, if the money’s still in the account a year from now, he’ll have done what he set out to do — namely, maximizing resources and operating the department as efficiently and effectively as possible.

“We put that money in there to run the water plant, to run our distribution system, but I want to see what we can do without those funds,” he said. “My goal is to hopefully not touch those funds and maybe next year they’ll still be there. We’ve got to start saving for those bigger projects.”

City Finance Director Dave Lewis said Jenkins is trying to set aside some of his day-to-day operation funds for system repairs and maintenance “to pay for a new maintenance contract that would cover the maintenance needs on the water towers and reservoir.”

“(He’s) trying to see if he can operate on less in 2020 so he can dedicate the $308,000 annually to ongoing maintenance of the tanks and reservoir,” Lewis said, adding the funds “could be used (in) an emergency until the new maintenance contract is signed.

“Jim was working this year to catch up on a lot of issues throughout the system,” Lewis added. “He also plans to do as much work with in-house labor as possible in 2020 to help reduce costs.”

Jenkins said he based his calculations on the $308,000 estimate he received for an annual tank and reservoir maintenance contract.

“We’re supposed to be a break-even facility,” Jenkins told council. “Real life doesn’t work that way. If we put the money in there, hopefully I don’t have to touch any of it. I want to see if I can make it without that money this year.”

But that’s not the only problem facing the department: Jenkins said his operators are nearing retirement, “we’re going to have to start thinking about replacing them.”

“In the past we had assistant operators,” Jenkins said. “But our assistants are (aging), too. Everybody in our plant could basically go in the next five years.”

Second Ward Councilman Craig Petrella said it has to be a priority, saying if they don’t get workers trained to move up to higher class jobs “we’re going to be in trouble.”

Jenkins also pointed out his truck fleet is aging, and he “truly needs” a truck that can make it to Dover and back with lab samples during line breaks, as well as a forklift to assist in unloading and moving shipments.

Jenkins said he’d also like to see the security gates replaced along with a camera system.

“We actually had someone break into the water plant not long ago,” Jenkins added. “The individual was a little inebriated. He just used the restroom and the operator talked to him and got him out.”

Other highlights: A total of 175 valve box lids have been replaced, 10 pipe leaks repaired, 37 vault tops removed and 53 hydrants installed, with seven more still to be done. Roughly 980 feet of water line has been installed on Efts Lane, 350 feet on Braybarton between Shady and Terri, 1,500 feet of new line and a new main on Starkdale Road is complete. They’ve also worked on pump valves and water tower valves, replaced two of the original five polymer feed pumps and rebuilt some as well.

“We’re down to 1 million to 1.5 million gallons a day,” Jenkins said, adding downtown flow is 630 gallons a minute “and going down.”

“It’s never been that low, ever,” he said, though crews are still grappling with a leak in the Market Street area.

“We have one more isolation sequence to try,” he said. “If we can get it isolated, we can save a lot of money.”

During a safety committee meeting, Paul said he’s fielded numerous complaints about drivers speeding through school zones throughout the city. Councilwoman at large Kimberly Hahn pointed out residents in the Efts Lane area are concerned they’ll have the same problem once a resurfacing project there is completed.

“They’re speeding now, and it’s busy as heck,” Paul agreed, adding, “I know we can’t have a police presence everywhere.”

City Manager Jim Mavromatis said they can deploy a camera to gauge how fast traffic is moving for statistical purposes.

“We can put the camera anywhere you want it. We can get you statistics, but it still needs to be enforced,” Mavromatis said. “It comes back to enforcement. It’s just human nature, people are going to speed. The main thing to stop it is enforcement, but it’s going to be expensive.”

The committee also discussed equipping the truck used by the city’s electricians with an automatic external defibrillator, as well as placing one at the Belleview Park concession stands.

“Moving forward, we’ll get one for the electric truck, then (consider) any other ones we need,” Paul said.

Hahn asked the committee to look at updating the city’s handicap parking ordinance, noting they need to ensure space designations in residential areas “legally have everything posted.”

“Clearly it has to be changed to make sure we meet all the legal requirements,” Mavromatis said. “Give us a couple of weeks to get all the legal stuff (together), we’ll figure out the simplest way to do it, and if you agree, we’ll get it done.”

“I just think if we can convert to LEDs, it would pay for itself in five years and going forward it would be a cost savings,” Petrella said.