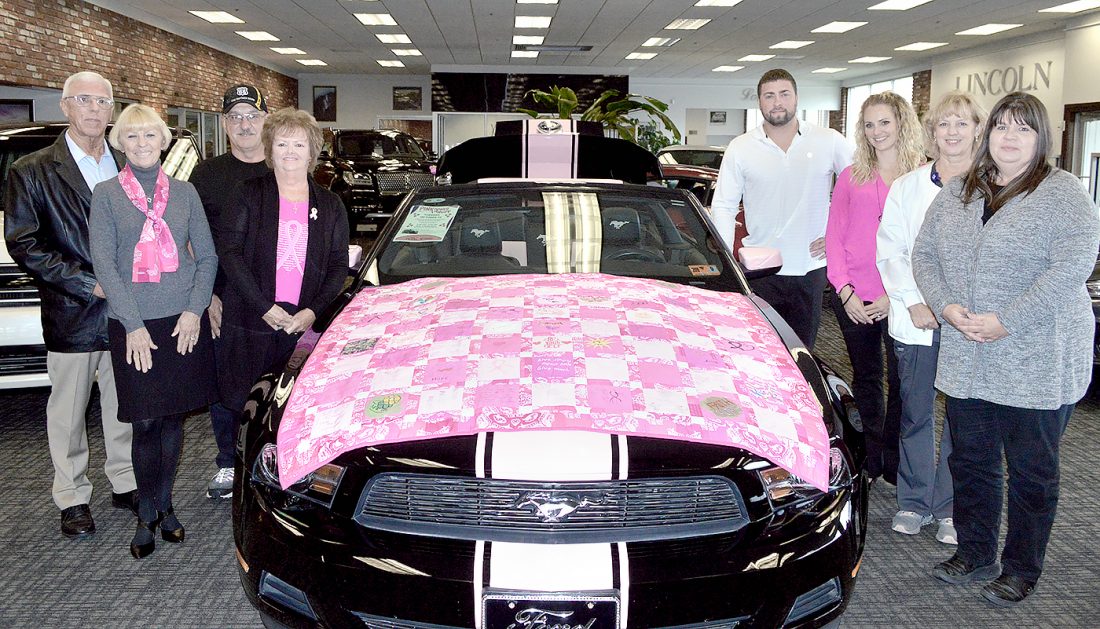 QUILT -- A handmade “Ford Warrior Quilt” featuring messages of encouragement to breast cancer patients and survivors is displayed on the “Pink Pony Mustang,” a 2010 custom car that will be given away on Oct. 30 by TEAM Ford-Lincoln to raise money for the Teramana Cancer Center. Tickets are priced at $5 each or three for $10, with the dealership matching total ticket sales and donating all of the proceeds to the cancer center. Celebrating Breast Cancer Awareness Month Wednesday were, from left, Bruce Carson; Helen Carson, who spent three months stitching the 81 quilt squares together by hand; Larry Stimpson and his wife, Susan, who previously owned the Pink Pony; TEAM Ford-Lincoln General Manager Justin Teramana; Catherine Poludniak, Trinity Health System Foundation manager; Marsha Lewis, Trinity oncology advocate; and Gaye Lochary, supervisor for the radiation oncology department. -- Linda Harris

STEUBENVILLE — A handmade quilt meant to “to honor, comfort and encourage” those battling breast cancer was presented to the Trinity Health System and the Teramana Cancer Center Wednesday.

The quilt is part of Ford Motor Co.’s Warriors In Pink program, designed to help those touched by breast cancer by supporting, inspiring and empowering patients and survivors. Since its inception in 1993, the program has raised $137 million for four breast cancer charities.

The presentation was made at TEAM Ford-Lincoln, which also holding a drawing for its Pink Pony Mustang to raise money for the Teramana Cancer Center. The 2010 Mustang, which features custom pink leather seats, striping and pink ribbon emblems, has less than 36,000 miles on the odometer.

TEAM Ford-Lincoln General Manager Justin Teramana said the vehicle will be given to the winner’s choice of a breast-cancer patient or survivor.

“We’ll match the total ticket sales and donate that money back to the Teramana Cancer Center,” he said, adding the dealership also will cover the sales tax.

Helen Carson of Latrobe, Pa., a nine-year breast cancer survivor, stiched the quilt squares, which were decorated by visitors to the Neighborhood Ford Store’s booth at the Pittsburgh Race for the Cure. Each square shared a message of encouragement and hope for survivors and their loved ones.

“It’s therapy for me,” Carson said. “As a survivor, I read the messages just as anybody coming in for treatment would. I’ve been very, very fortunate — like most people, when you get diagnosed you think, ‘that’s it, I’m dead’…but I decided to just go for it.”

Carson and her husband, Bruce, had been living in California and were preparing to retire and move back east. Once here, she got involved with Walk for a Cure in Pittsburgh and the Neighborhood Ford Store’s booth.

“I can’t tell you how blessed I am,” Carson said. “My husband and I no longer put anything off.”

The car previously belonged to Susan and Larry Stimpson, who said it placed fourth among more than 3,000 Mustang’s judged at the Ford Nationals in 2016.

“She felt it was time for someone else to enjoy it, so we decided to sell it,” Larry Stimpson said. “Hopefully, it makes a lot of money for the cause. We’re very happy, it’s exactly what she built it for.”

Susan Stimpson said she “only wanted it to go for something like this.”