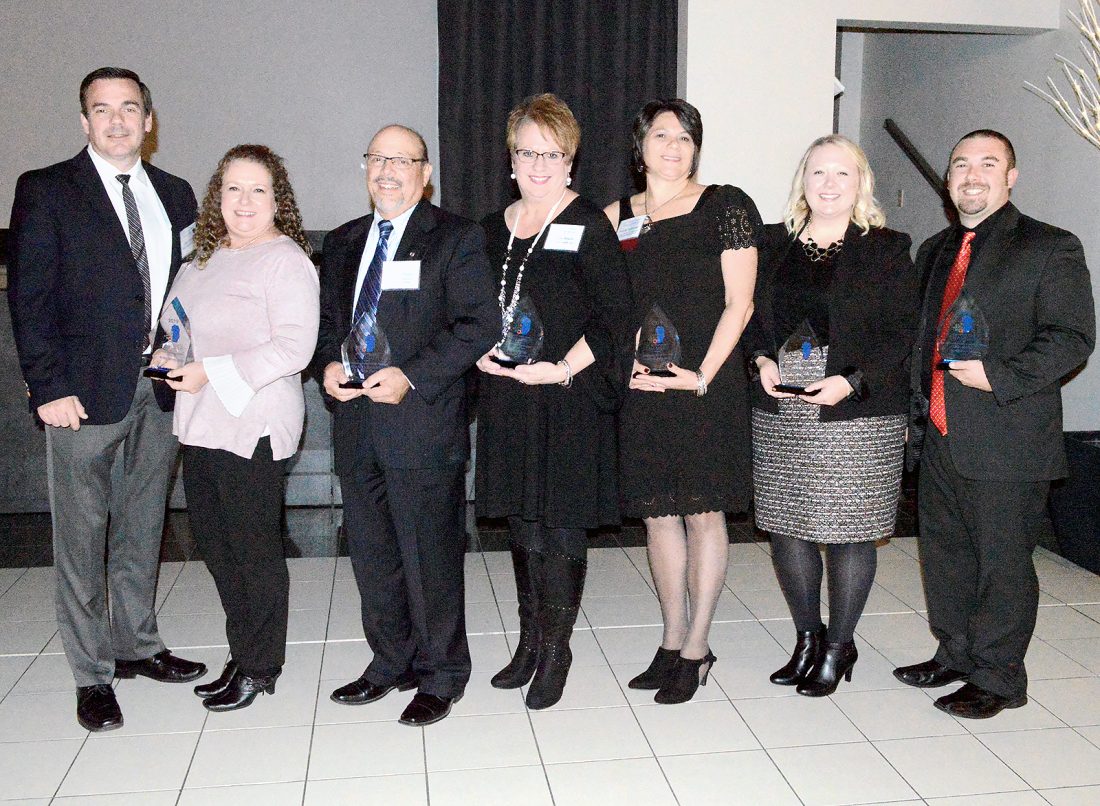 WINTERSVILLE — The Jefferson County Chamber of Commerce celebrated the accomplishments of its members at Wednesday’s annual dinner meeting, the group’s 111th.

“It’s the one time we get to give everybody kudos,” Chamber President Tricia Maple said after the event, applauding the diversity of this year’s nominees. “We had more than 300 people attend again.”

The theme of the dinner, held at St. Florian Event Center, was “Anything on Wheels,” a nod to past and present local automotive dealerships as well as wheel-related organizations that have been instrumental in the Jefferson County economy. The keynote speaker was Mark Patton, vice president of Columbus Partnership and co-leader of the Columbus Smart Initiative.

Accepting the 2019 Lifetime Achievement Award was Lou DiGregory of DiGregory’s Greenhouse and Garden Center. DiGregory, who will retire at the end of the year, is in charge of day-to-day operations at the business, which has been in his family for 82 years.

Young Professional of the Year honors went to the United Way’s Kate Sedgmer, while Ohio Valley Natural Relief scored the award for the chamber’s New or Emerging Business of the Year. Nicole Adamski of the Inn and Suites at Franciscan Square was celebrated as the chamber’s Ambassador of the Year.

Ohio Valley Health Center and Valley Wine Center shared Business or Organization of the Year honors, the first tie in the chamber’s history.

Patton told the crowd to brace for sweeping changes that will transform transportation as we know it, pointing out Columbus Smart Initiative won $50 million in grants from the U.S. Department of Transportation and the Paul G. Allen Family Foundation to look at “innovative and safe mobility solutions” that will move the nation away from carbon-based fuels.

He said they initially matched the original $50 million grant, with another $90 million from the private sector. The group now has an “acceleration fund” of upward of $600 million to sustain the initiative.

Patton told chamber members they’re already seeing a shift in transportation trends in Columbus, pointing out there were 667,000 Uber and Lyft rides last year “in a marketplace that had zero just a few years ago.” They’re also logging 9,000 rides a day on scooters in nice weather, while micro-transit buses and bike sharing “are going on all over the place.”

“There’ve been huge changes in how people move around,” he said.

Maple said the chamber, which was founded in 1908, has focused on work force education and training during the past year, “along with making our member benefits better.”

A highlight, she said, was organizing “new, more relevant committees” to carry the chamber’s mission forward in 2020, calling it “a long time in the making.”

Special recognition was given Wednesday to retiring chamber Chair Tony Mougianis of Apollo Professional Cleaning and Restoration, who will serve in an emeritus capacity during the next year, and Ross Gallabrese, executive editor of the Herald-Star and The Weirton Daily Times, who has served as vice chair.