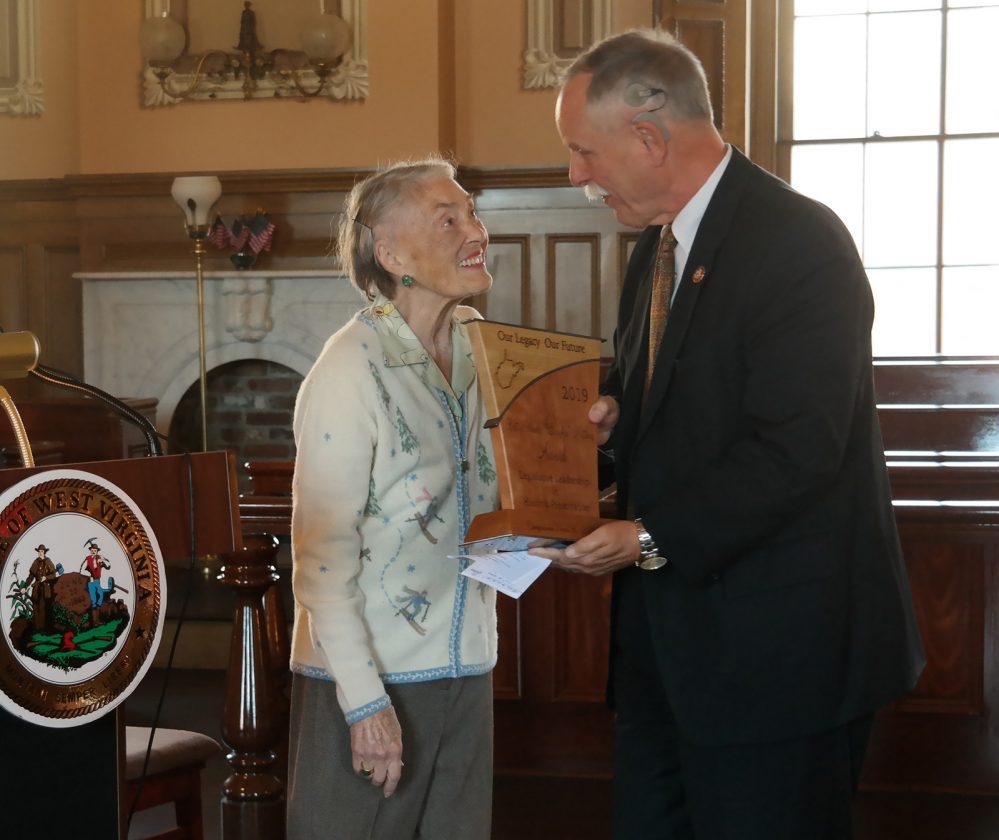 WHEELING — Historic preservationists from Wheeling and around West Virginia gathered at the West Virginia Independence Hall on Sunday for an awards ceremony recognizing those who helped further the state’s legacy and future.

The State Historic Preservation Office of the West Virginia Department of Arts, Culture and History presented awards to several individuals and entities as part of its 2019 “Our Legacy, Our Future” ceremony.

“Congressman McKinley was instrumental in saving this program for our state, for Wheeling and for the country,” said Susan Pierce, deputy state historic preservation officer.

McKinley thanked the preservation office and spoke about the importance of preserving history.

“Why do we do this? It just preserves something, respect for our elders, people who came before us and what they did,” McKinley said. “We’ve got some wonderful things in this community and across the country. That’s why we took the chance to preserve our historic preservation tax credits, because if we had lost those I think we would’ve lost a whole host of our history.”

The ceremony also recognized McKinley for the work of his former company, McKinley and Associates, which was responsible for the adaptive reuse of historic buildings in Wheeling, including the YMCA of Wheeling, Wagner Building, former Wheeling Public Library, McLure House and several buildings on Wheeling Island.

“I am inspired by that continued passion that she shows for history,” Pierce said. “Most recently, the Soldiers and Sailors Monument here at West Virginia Independence Hall is a true example of what an individual can accomplish.”

Brennan, a former history teacher at Central Catholic High School, served as president of the Wheeling Area Historical Society and oversaw fundraising efforts to move the Soldiers and Sailors Monument from Wheeling Park to Independence Hall.

“We are connected to so many of our old buildings,” she said. “I can’t imagine what would happen without our built environment and the history that’s enclosed there.”

The city of Wheeling received the ceremony’s organization award for its commitment to preserving historic buildings in downtown Wheeling. Accepting the award on behalf of the city was C.J. Kaiser, chairman of the city’s Historic Landmarks Commission.

Also at the ceremony, Robert S. Conte received the Betty Woods “Snookie” Nutting Award for exemplary service to historic preservation. Conte has served as the resident historian of The Greenbrier since 1978.

Happy Retreat of Charles Town received the award for outstanding individual resource. Restoration work of the Charles Washington home and its 18th century buildings is ongoing, with plans to develop the property as a center for history, heritage tourism, scholarship and culture.

Walter Washington, president of Friends of Happy Retreat and a descendant of Charles and his brother, George Washington, accepted the award.

The Lewisburg Historic District was also recognized for outstanding work in a historic district. The district was listed in the National Register of Historic Places in 1978, and the city’s Historic Landmark Commission has employed design review for over 30 years, “ensuring that the enduring historic character of the district is preserved,” according to the preservation office.

The “Our Legacy, Our Future” awards were inaugurated on the 50th anniversary of the National Historic Preservation Act of 1966 and celebrate the people of West Virginia who have contributed to historic preservation efforts and the places throughout the state that give life to our history.