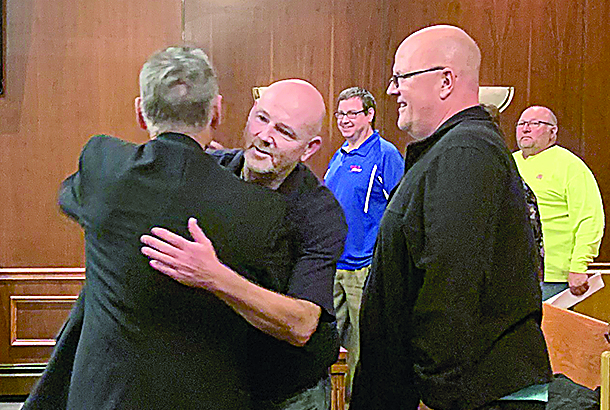 STEUBENVILLE — City Council signed off on a reclassification of the old Grant School property Tuesday to B-1, Central Business District, paving the way for a still unidentified retail developer to come forward with plans for the 0.94-acre site.

The site previously was zoned public/semi-public, even though it hasn’t been used as a school building since the 1980s. It had been sold to a private owner in 1996, the building demolished in 2004 and the property sold to the city in 2009.

Urban Projects Director Chris Petrossi has said only that the party expressing interest in the rezoned site is a national concern that already has a presence in the community. Since no plans have been submitted or agreements negotiated, he has said the identity of the potential buyer remains confidential.

The rezoning vote passed unanimously, though 4th Ward Councilman Scott Dressel did ask Petrossi to look at a process for developing the former school property, located at 237 S. Fourth St., in a style that would pay homage to the design of structures in the vicinity.

Dressel said he’d like to see the buyer “try to build something sympathetic with downtown structures so it fits in, character-wise.”

“It might be the right time to come up with a basic design for brick and glass so it doesn’t look totally out of place,” he said.

Council also was reminded that the Ferguson Group has announced a multi-million dollar investment in a family fun center at the old Sears building in the Fort Steuben Mall, while a new business, All 4 Kids, opened 4238 Sunset Blvd., Suite A,. Dunkin Donuts continues work at its new site, where the old Pizza Hut on Sunset Boulevard had been, 6th Ward Councilman Bob Villamagna said.

Villamagna also requested a resolution of appreciation be prepared for Russell Hunt, owner of Total Lawn Care, for his voluntary efforts to beautify the city.

As a service to the city, Hunt and his crews have taken responsibility for the landscaping at the north and south entrances to town as well as the roundabout on Lovers Lane. He recently added the new “Welcome to Steubenville” sign at Washington Street and state Route 7 to his work list.

News of the business developments and potential developments came on a night when the invocation, this week offered by retired Marine Sgt. Jack Ernest, founder and president of We Believe Ministries Inc., was delayed so council could salute the efforts of Historic Fort Steuben volunteer Patrick McLaughlin and AMVETS Post 275 Commander Dan Wilson to save Ernest’s life during a POW/MIA remembrance last month at the park.

Mayor Jerry Barilla said the duo’s “quick thinking and knowledge of CPR” saved the life of the decorated Vietnam veteran, who had stopped breathing in the 90 degree-plus heat and high humidity that day. He said Ernest was reading the names of 25 veterans who remain unaccounted for when he collapsed, striking his head.

Barilla said Wilson began CPR with McLaughlin counting the compressions and breathing for him.

“I never experienced anything like that,” Barilla said. “It was quite emotional.”

“I was dead,” Ernest said before hugging both men.

While there’s been one more homicide this year than last — three — suspects are in custody in all three. There have been seven rapes reported this year, one more than for the same 10-month period in 2018.

But Mavromatis pointed out burglaries, robberies, thefts, thefts from autos, arsons, shots fired and assaults are all down, and that the department responded to 12,412 calls.

“That shows our citizens are taking an active approach, they’re reporting things and we are responding,” he said. “Crime is down. That’s a positive thing for this city.”

Also reported were two arsons, down from six in 2018; 141 assaults, down 214 in 2018; 1,149 arrests, down nine, and 61 suspected overdoses, down four, though there’s also been seven overdose deaths, one more than during the reporting period last year.

Legislation also was sunshined by 1st Ward Councilman Gerald DiLoreto that would stipulate that only grant money can be used to extend a water line to the Steubenville marina.

After a closed-door session to discuss the finance department’s information technologies division, the finance committee sunshined emergency legislation amending the table of organization as well as the city’s indirect cost allocation plan.

Finance Director Dave Lewis said the measures would allow him to hire an IT. administrator and outline where the funds to pay for that employee would derive.