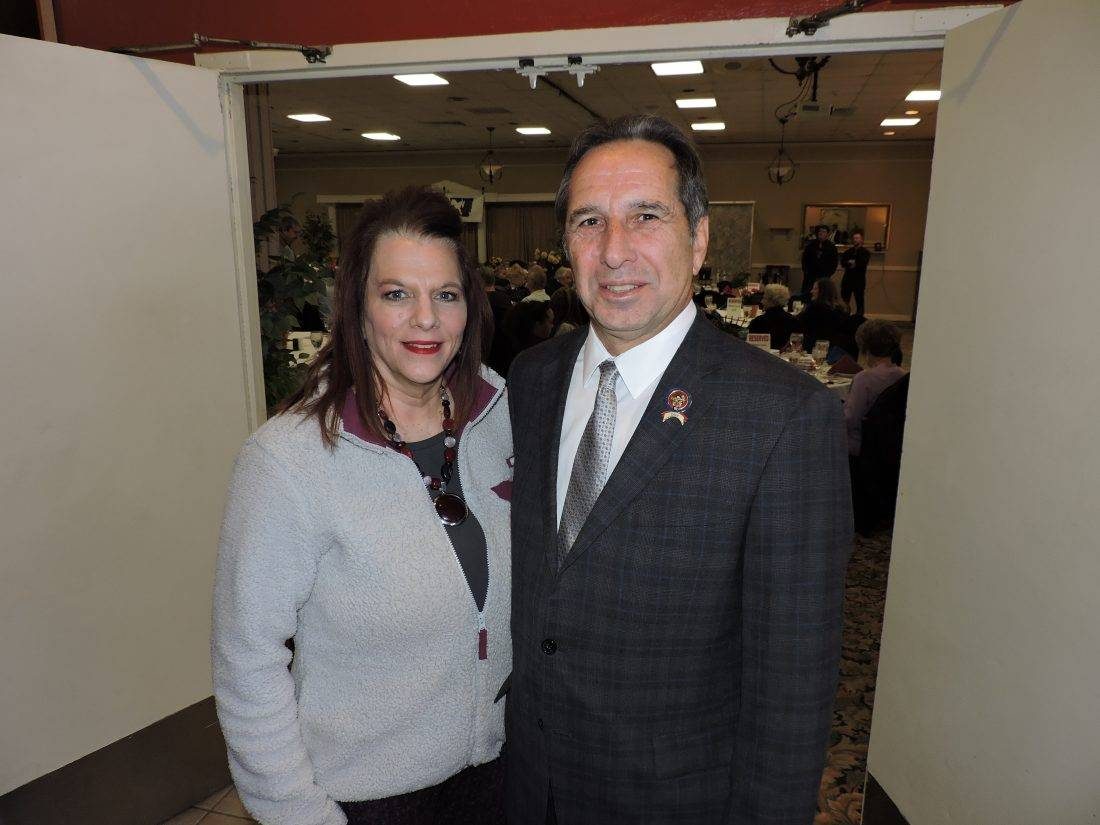 SPEAKER — State Rep. Jack Cera, D-Bellaire, and his wife, Becky, were among those who attended Thursday’s Belmont County Democrat Party dinner. Cera was the speaker for the event. -- Shelley Hanson

The party also honored two former county officials and one museum founder, all of whom died away recently. The event was dedicated in memory of the late Roger Conroy, who is the former Belmont County auditor; the late John Mattox, founder of the Underground Railroad Museum in Flushing that still operates today; and William Shubat, the former director of elections for Belmont County.

Phil Wallace, party chairman, presented special plaques honoring all three men to their relatives in attendance. The 60th annual dinner was held at Undo’s in St. Clairsville. About 135 people attended the affair that serves as a fundraiser for the party. During his speech, Cera reminisced about when he first ran for office at 26 years old. He said it was 37 years ago since the first time he spoke at a party dinner. He noted he has learned a lot from party elders and he also received much help from family and friends over years to get re-elected.

During his first campaign, Cera said he got a little comfortable speaking at rallies and once slipped and used the word “hell.” Today such language may seem mild for a politician to use, but Cera said he received a bit of advice afterward.

“Wayne Hays, who was party chairman at the time, told me I gave a good speech, but don’t ever cuss in front of the people. I always remembered that and have passed that advice along to other candidates,” Cera said.

“Of course, my aide has to warn young staff around my office that they may hear a few well-chosen cuss words coming from my office and not to worry because it’s not directed at them, but I still try not to cuss when I speak to a group.”

Cera said his interest in politics started a young age and only grew as he became older. As a high schooler in Bellaire he ran for student council. Later he studied politics at Brown University. One of his professors there did not like him and gave him a poor grade in one class.

“I didn’t like the professor and he didn’t like me. I always thought it would be great to run into him again so I could say, ‘Remember that bad grade you gave me in Campaigns and Elections? Well, I’m 11-1 in elections,'” Cera said of his record.

Cera had a long list of accomplishments he said he was proud of. Among them included fighting for workers’ rights, working to improve the state’s storm warning system following the Wegee Creek disaster in 1990, fighting to get funding for Eastern Ohio municipalities, and helping individuals in his district.

“Our office has always tried to put constituent cases first and help them the best we can whether it’s with state government or private industry. We haven’t solved everyone’s problem but we try,” he said, noting his legislative aide, Pam Wilson, is responsible for most of the successes of the past 18 years.

Cera concluded his speech by expressing concern with the state of the political system. He said politicians today need to campaign less and dedicate more time to helping people.

“Don’t get me wrong, politics has always been and always will be a tough game and not for the faint of heart. And we should continue to point out our differences on issues. But we certainly still have plenty of problems that need to be solved,” he said.