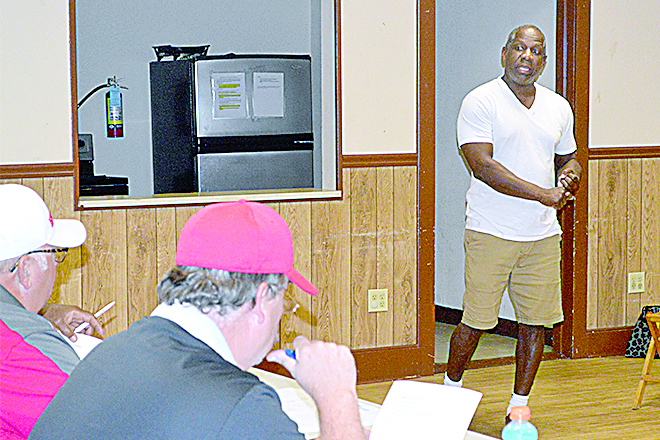 CONCERNS AIRED — Concerned resident Royal Mayo tells Steubenville Park and Recreation Board members what he doesn’t like about a proposal to turn North End Park into an all-inclusive Miracle Field. -- Linda Harris

STEUBENVILLE — On a night when City Manager Jim Mavromatis recommended the Parks and Recreation Board close any tot lot that doesn’t have a community sponsor, it was the sometimes-heated back-and-forth over a proposal to partner with a nonprofit to make North End Park into a Miracle Field that dominated discussion at Wednesday’s meeting.

Mavromatis said he visited the Parkdale, Devonshire, Flats and Linda Way tot lots recently to assess conditions and usage, and neighbors at only one of them — Linda Way — had approached him to say they were “very interested” in keeping that park for their neighborhood and would be willing to do whatever needs to be done.

He said city officials need to ask themselves, “Do we have the manpower to maintain them and are they getting enough use” to justify maintaining them, particularly with major expenditures looming at the parks — estimates to repair the historic sandstone bridge at Beatty Park, for instance, have topped a quarter-million dollars, while several hundred thousand dollars will be needed eventually for new lights at the Belleview Park ball fields.

“We need to close some of those tot lots,” he said. “If we can get people to (help), then we can keep them open.”

Parks Director Lori Fetherolf said her small staff is worried about job security, but she told them, “things are not being done right now in a timely manner that we’d be able to get done” if the park system were downsized.

“There are maintenance things in the parks that are not getting done in a timely manner,” Fetherolf said. “By partnering with others, park staff (would) be able to address some of those things that don’t get taken care of on a regular basis.”

The park board will make its recommendation in October, but City Council will make the final decision. In the meantime, neighborhood groups interested in helping maintain their neighborhood tot lot would need to petition the board to “adopt-a-park,” a program that allows interested groups to volunteer to “help provide a safer, more beautiful park experience.”

New adopt-a-park guidelines are in place, including a requiring that the sponsoring group have at least two cleanups a year. The board “encourages” monthly walk-throughs to monitor conditions, and things like trash bags and gloves would be provided by the city.

It was during the public comment period that former Steubenville NAACP president Royal Mayo took issue with the Urban Frontier Association’s proposal to spend up to $3 million to revamp North End Park.

“If you’re going to renovate a park, let it be a park that’s not already up and functioning,” Mayo told the board. “There’s nothing wrong with North End Park, there’s no reason to make it something other than what it is.

“Don’t come into our community and change a park where the people who (live there and use it) aren’t the primary beneficiaries,” Mayo added. “And don’t do it without talking to them.”

Mayo told the Parks and Recreation Board and Urban Frontier Executive Director Thom Way the miracle field “is a great idea, it would be good — but it needs to be somewhere else.”

“Don’t take over a community park and put something in that the community doesn’t need and want,” he said. “There’s room to keep that park and do what he wants to do somewhere else.”

Mayo said the poured rubber surface that would make the park accessible to individuals with varying degrees of mobility would discourage use of it as a ballfield, since it could only be used for T-ball.

He insists other park sites — among them, Jim Woods or even the “flats” tot lot — would be better-suited since both playing fields are under-utilized, though Way told him those other sites had been looked at and dismissed.

Fetherolf also pointed out the proposal is still in the preliminary stages: No decisions have been made, nor can they until City Council has a chance to vet the proposal.

“Before you even discuss it among yourselves, you go to the people” and ask them, Mayo said.

“Because they sent me,” Mayo snapped, adding, “I guarantee you that (North End) ballfield is used 10 times more than Jim Woods.”

A frustrated Way described North End Park as “the most under-utilized park we have,” and told Mayo it would having been premature to meet with residents without knowing council was at least interested in the idea.

Once they do, he said he will be scheduling at least two community meetings to explain what he has in mind to residents and get their input.

Way also told Mayo that while he respects his opinion, “I’ve been down to North End Park about every day talking to the people who are there the most … the ones drinking out of brown paper bags and sharing (cigarettes)” who think it’s a good idea. “I’ve talked to kids,” he said, adding they’re excited at the prospect of having an enhanced play site in their backyard.

Way said he’d been part of a community group that took the former park director to task for conditions in the park, describing it as a culture of “apathy and neglect.” The playground equipment on site now had been purchased for a tot lot that had closed, “that’s why it doesn’t look right there.”

“The T-ball league had four or five games this year due to field and fighting for locations,” Way added. “So the largest beneficiary to the (project) is on the other side of the train tracks, the kids I showed the pictures to. They’re so excited about having something like that ‘being in their neighborhood.'”

The discussion grew heated, with one board member pointing out the “only ones I ever see down there are the girls softball teams.”

Way did say he’d look into the possibility of using a turf surface, rather than the poured rubber surface they originally looked at.

“If there’s turf and everybody can still use it, I would have no problem with it,” Mayo said.

Peterson, meanwhile, reminded everybody, “We haven’t approved anything, we’re still in the beginning stages.”

Fetherolf agreed, adding, “We just wanted to make sure this group is OK for him to go to council, then come back here” for approval, she said.

Board member Vicki Nurczyk also told Way the public meetings have to be a priority, “not just to get people on board, but so they can make informed decisions.