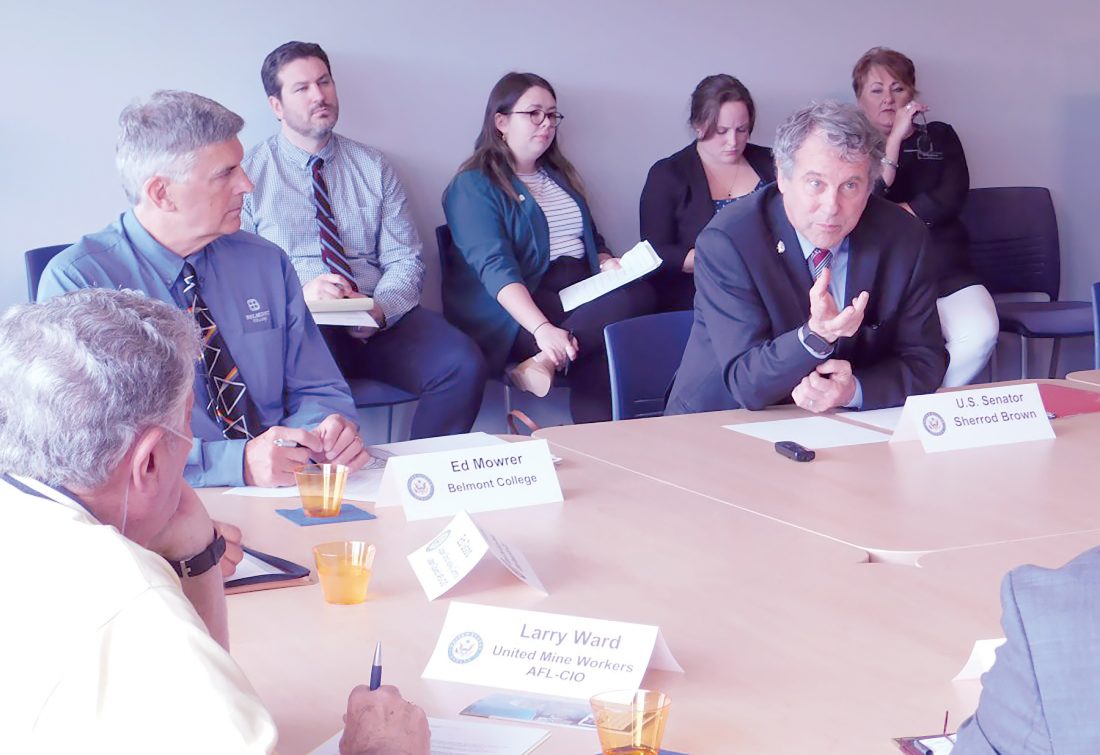 Robert DeFrank VISITS AREA — U.S. Sen. Sherrod Brown speaks with educators, union representatives and other groups during his visit to Belmont College Wednesday. He is seeking input for his proposed legislation to provide options for workers who have lost their jobs due to automation and advancing technology. Ed Mowrer, energy institute manager at the college; Larry Ward, representing the United Mineworkers; and others gave input and asked questions. -- Robert A. DeFrank

Brown intends to introduce the Workers’ Right to Training Act of 2019 when Congress reconvenes next week. He is seeking co-sponsors and visiting sites around Ohio.

Brown had harsh words for what he described as globalization, bad trade agreements and bad tax laws that give tax breaks to companies that move jobs overseas.

“We also need to help workers deal with technology. When that technology changes and workers are thrown out of work, those companies need to retrain those workers. They need to give them severance,” Brown said.

In addition, the legislation would require companies to provide 180 days advance notice to workers when new technology will change employment positions, and 270 days notice if jobs will be eliminated. Employers would bargain directly with employees on how best to implement new technology.

“We can tell the companies to treat their workers with more respect than they do,” Brown said.

During the meeting, several people pointed out examples such as drones used instead of line workers to inspect power lines and transformers, driverless vehicles and fewer steelworkers required to make steel. Others noted many workers cannot afford to seek additional schooling or training while maintaining their jobs.

Many shared personal stories prior to the meeting.

“We know firsthand. I was employed in the utility industry for 38 years. We know the challenges technology brings, whether it’s good or bad,” said Ed Good, who was representing the Upper Ohio Valley Central Labor Council. He added while there are many benefits to technological advancement, there is often a human cost, and he commended any assistance for those who have been adversely affected.

Good pointed out changes in the utility industry, such as the shift from coal to gas plants.

“Gas plants produce more electricity and heating for people, but those who are left behind on the coal side, they have these transportable skills they can move into some of these other gas plants or some of these other industries. Someone who can monitor flows or work on different pieces of equipment in the coal industry or the utility industry can also transfer those skills.”

“When you go into Sheetz and you actually go in and you utilize the kiosk, that’s someone’s job that technology’s replacing,” Ginny Favede, Project BEST co-chairwoman, said. “Brown is actually attacking that on a national level.”

“We’re excited to see the senator come down and listen to the people,” said Ed Mowrer, energy institute manager at the college. “At the college, we’ve traditionally done retraining for any group of displaced people. We’re ready and prepared to offer any training, particularly in high technology.”

Mowrer added the future will likely have opportunities related to the oil and gas industry or the plastics industry working with by-products of a potential ethane cracker plant that may come to the Shadyside area. Mowrer said many of these jobs will require higher training.

“We’re seeing this transition in the Ohio Valley with the influx of what we consider to be new manufacturing jobs,” he said. “Manufacturing has changed wholly from what our grandparents are used to now.”

“We’ve had meter readers at the gas company be displaced through automatic meter readers,” he said. “At the treatment plant, they’ve put in a new belt line that used to have to be monitored. Now it’s automated.”