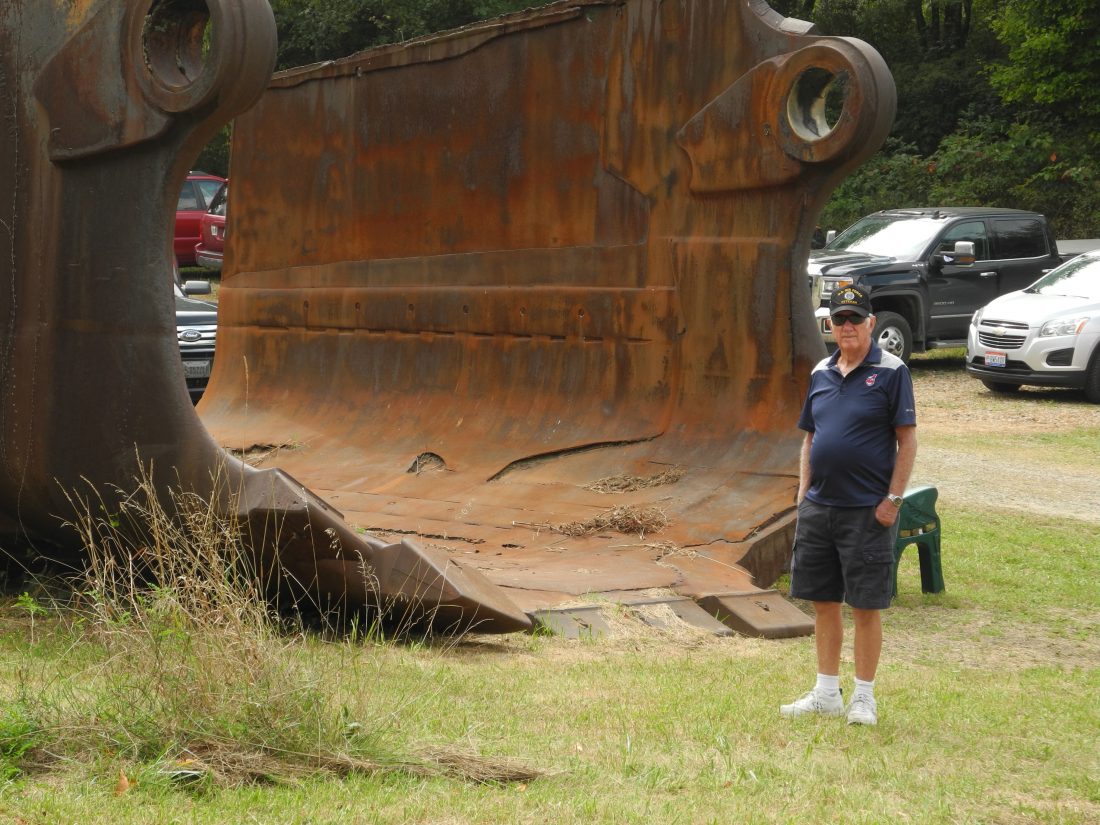 BIG SHOVEL — Lamont McCoy stands before the Silver Spade shovel that once moved tons of coal and dirt. The SIlver Spade was demolished and the shovel donated to the Harrison Coal and Reclamation group. -- Esther McCoy

CADIZ — The Harrison Coal and Reclamation Historical Park organization is working to preserve the region’s mining history, and it held its 16th-annual construction and mining show Sept. 7-8.

Among the items on display was the gigantic cup-shaped shovel that had belonged to the Silver Spade. The giant earth mover was dismantled by Consolidation Coal Co. for scrap. Joe Curran and John Schumacher of East Brady, Pa., who worked in the coal fields for 40 years, explained that the shovel once had seven teeth to scrape up dirt or coal. Consol started to scrap it and cut off two teeth before the park group took control of the item. The retired miners showed the 200-foot high boom for the shovel and the heavy cable that had been used to lift it. They explained they welded in the field and had worked on shovels similar to the Spade.

George Stewart of Burgettstown brought a Bay City steam shovel. Allen Grover of New Comerstown had three “hit and miss” machines that were used before electricity served many areas. They were contained in carts that made them mobile. Women would fire up the gasoline engines that would provide power for washing clothes. Farmers woud use them for milk separators, or provide electricity for one room in a house. They ranged in size from 1.5 horsepower to 2 horsepower.

Other demonstrations included a steam shovel and a bulldozer was smoothing out land with many ruts.

A 1919 red-and-gold Steubenville Transfer truck was among the vehicles on display, as was a 1929 Ford Model A truck.

Roger Sliva’s authentic coal car with steel wheels that ran on tracks and filled with good-quality coal was on display. He also had pulled the coal cart on a tractor in the Adena Heritage parade.

June 2: Events canceled/postponed due to coronavirus