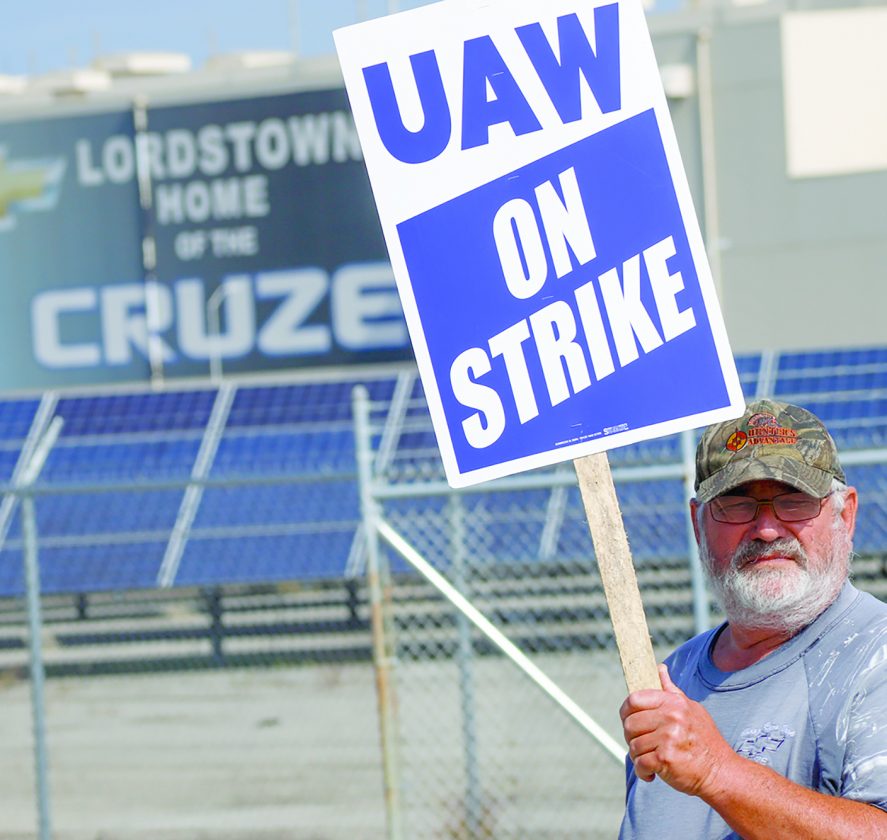 PICKET LINE — A picketer carries a sign Monday at one of the gates outside the closed General Motors automobile assembly plant in Lordstown. -- Associated Press

LORDSTOWN — General Motors would be the second-largest automaker after Tesla to have a heavy hand in the production of electric vehicle batteries should speculation on its offer to open that sort of plant in Lordstown proves accurate, an automobile industry analyst said.

But with that comes risk as GM and other automakers continue to grapple with making electric vehicles appealing to mainstream consumers, said Karl Brauer, executive publisher of Kelley Blue Book, a brand of Cox Automotive.

“Even if GM sets up Lordstown as an electric vehicle battery-producing plant and are fully prepared to make that happen, you could still end up with a plant with more capability and capacity than the market demands,” Brauer said.

Rumor from contract talks between GM and United Auto Workers in Detroit is GM has offered to open an electric vehicle battery plant in Lordstown, where the automaker idled its assembly plant in March.

The new factory would be in addition to a proposal by Cincinnati-based Lordstown Motors Corp., an affiliate of electric truck maker Workhorse Group, to build electric fleet-style pickup trucks at the sprawling complex.

Although automakers keep the cost of electric vehicle batteries hush-hush, it’s considered to be the most expensive component, so if manufacturing in-house rather than sourcing the batteries cuts even 10 percent to 20 percent of the vehicle cost, “it’s still something” in comparison to the more profitable internal combustion vehicles with higher profit margins, Brauer said.

GM spokesman Dan Flores said the company sources its electric vehicle batteries from LG and assembles them into battery packs at a facility in Brownstown, Mich., a community south of Detroit.

He couldn’t say Monday if that same way would continue under a proposal the automaker has made to United Auto Workers as the sides continue to try to reach a new agreement, and that is to become the first union-represented battery cell manufacturer in the U.S., according to a statement from the company.

Neither Flores, Brauer or another electric vehicle expert, Chris Ruoff, founder and publisher of “CHARGED” Electric Vehicles Magazine in St. Petersburg, Fla., could say how many workers an electric battery plant would employ.

In this instance, Ruoff said he’s inclined to think GM isn’t talking about making the actual batteries, but assembling the battery packs because of the production cost.

“Definitely the limiting factor for electric vehicles today is the cost,” Ruoff said. “It’s hard to get a number, to narrow down a number, because they are sensitive about talking about actual price. The focus of all of these companies is to drive down the cost of the battery, pretty much.”

That’s why, he said, automakers are working so hard to improve the weight efficiency — so they can use fewer batteries in the car.

Brauer agreed, adding GM has done well at shedding weight in its electric vehicles, but had a different take on production. The evolution of battery pack production has lessened the expense, and he speculated the buy vs. build now could be a wash.

“It’s like thousands of times bigger than your cellphone battery,” Ruoff said. “In fact, Tesla uses a form factor that is commonly found in flashlights and laptop batteries and stuff like that … They use like 10,000 of these things, so you find like six of them in a laptop and Tesla cars have tens of thousands in them,” Ruoff said.

Sometimes they are covered with a thermal coating to keep them cooled. A lot are liquid cooled with channels between the cells, he said.

In the vehicles, the batteries, generally speaking, are low to the ground, which helps lower the vehicle’s center of gravity and avoids damage in a collision. Automakers, however, need to balance that against damage from a possible road strike, so they are often contained in a heavy shell for protection, Brauer said.