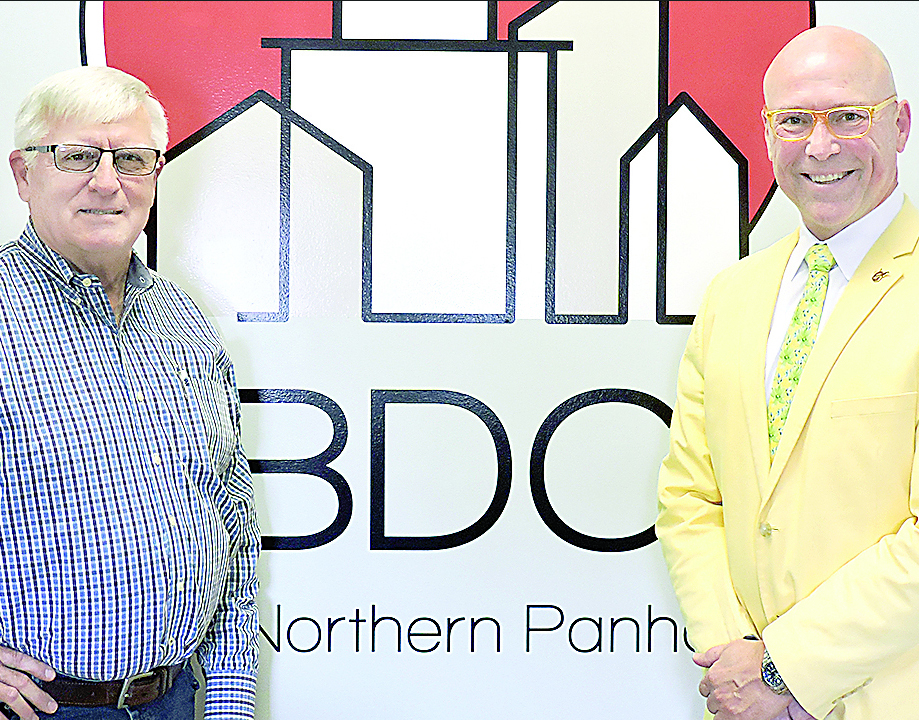 IN TRANSITION — With only a few more weeks remaining for his time in the Northern Panhandle, Patrick Ford, right, and the board members of the Business Development Corp. of the Northern Panhandle are preparing for a transition to a new executive director. With him in the BDC office in Weirton is Marvin Six, assistant director. -- Craig Howell

WEIRTON — After 10 years of working to spur economic development in the Northern Panhandle, Pat Ford says it’s time for a new challenge.

On Aug. 29, Ford announced his plans to step down as executive director of the Business Development Corp. of the Northern Panhandle, a position he has held for the last decade, for a new job with the Marion County Industrial Foundation, based in Lebanon, Ky.

“You’re always looking forward to finding places that have challenges,” Ford explained of those involved in economic development, noting being in one place for 10 years is a rare situation. “Our shelf life is generally three or four years.”

Ford said his 20 years of experience in the public and private sectors across five states prepared him to be able to come to Weirton, and he will take the skills he has learned in the Ohio Valley to his next challenge in Kentucky, where he will continue his work in development, but also focus on Main Street revitalization and tourism.

While Ford said he will be staying until early October, the search is on for someone new to fill his post.

To aid in locating the group’s next executive director, the BDC has contracted with the Next Move Group to undertake a nationwide search.

“We’ve been in contact with them the last two weeks,” BDC board Chair Bill D’Alesio said, adding one of the firm’s partners will be in the area next week to meet with board members and others in the community to get a better idea of the needs of the area, the focus of the BDC and the expectations for a new director. “Obviously, the standard is going to be high.”

D’Alesio said the anticipation is to have a new executive director in place by the end of November.

In the meantime, he pointed out that Assistant Director Marvin Six will remain on board to oversee the day-to-day operations, and the BDC has legal counsel and an accounting firm to handle other aspects.

“We don’t anticipate missing a beat,” D’Alesio said, adding a baseball analogy. “We’re on second, leading off to third. We’re not getting picked off. We’re not going back to first base.”

Six, who has been a mainstay with the BDC since the 1990s, agreed.

For much of the last 10 years, that course has included building relationships and acquiring an inventory of properties to make available for economic development opportunities. The property acquisitions have meant every abandoned or inactive factory site in Hancock and Brooke counties is now active in the redevelopment process, but that, too, took time.

“This didn’t happen the first two or three years,” D’Alesio said, explaining it took time to build relationships with officials and groups, not only in the Tri-State Area, but in other parts of West Virginia and in Washington, D.C.

Those relationships also have expanded to other nations, as companies from Canada and Italy have recently set up shop in the area, and Ford has taken numerous trips to Japan to discuss opportunities with companies there.

According to Ford, when he started with the BDC, the agency had $36,000 in net income and assets worth $350,000. The local unemployment rate was at 13.7 percent. Today, they have $1.6 million in net revenue and $9.5 million in assets. Unemployment in the area is around 6 percent, Ford said, with 700 jobs preserved and another 2,500 jobs created.

The board itself has changed, Ford noted, going from a group focused exclusively on Weirton to including more representation from businesses and other communities in the region.

A.J. Thomas, a Brooke County commissioner and one of the newest members of the BDC board, said Ford has taken the BDC to a point where it is a cornerstone of the community, beyond just economic development, and he wants to make sure that continues with a new executive director, as well as with the members of the board and the BDC’s executive committee.

“I want to make sure we get the right fit for the community,” Thomas said. ”

Community involvement is just as important.”

That involvement and sense of civic inclusion is something Ford said he will continue to cherish.

“I’ve never been as warmly accepted in a community,” Ford said, noting his resignation letter to the BDC board initially was rejected three times.

Ford did add that, though he is leaving the valley, it won’t be the last time the people of the Tri-State Area see him, noting he intends to visit as often as he can to see the friends and colleagues he’s made during his tenure in the region.