Veterans’ court is now in session 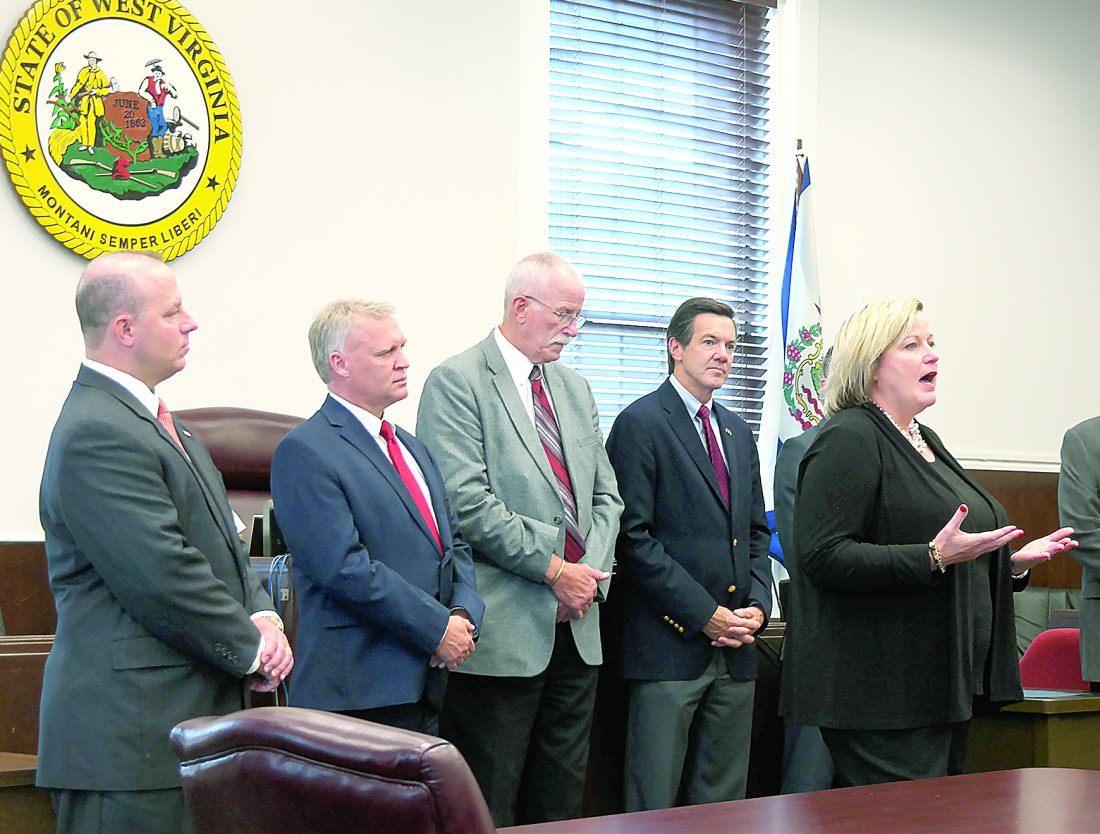 WELLSBURG — A court program designed to help veterans and active service members in West Virginia was announced Wednesday at the Brooke County Courthouse.

Members of the West Virginia Supreme Court and state Sen. Ryan Weld, R-Brooke, announced the establishment of the Military Service Members Treatment Court program in the state, something Weld pushed for during the 2019 legislative session.

“It’s a perfect example of the good things that happen when people work together and sit down and talk about issues and then solutions,” Supreme Court Chief Justice Beth Walker said. “We thought it was a nice occasion to not only recognize the start of the court but to recognize we are grateful to Weld for partnering with us, helping us give some input on the legislation and getting it so it was workable.”

The Military Service Members courts will focus on treatment and rehabilitation rather than just incarceration, Weld said. The courts will function as a specialized track in adult drug courts and are now available in the First Circuit, which includes Brooke, Hancock and Ohio counties, as well as the 13th Circuit in Kanawha County and the 24th Circuit in Wayne County.

Weld introduced Senate Bill 40 during the legislative session to reinstate the courts after the program was disbanded in 2017 due to apparent funding problems. The bill passed unanimously.

“It’s important to me not just as a legislator but as a veteran,” said Weld. “When I came home from Afghanistan in 2011, I was very fortunate that I came home and felt that I had a great network of support. Some people don’t have that and they slipped through the cracks.

“This is all about helping those individuals who have slipped through those cracks and don’t have that support system that is behind them all the way and they find themselves in the criminal justice system,” he continued. “That’s really what this is about statewide, helping people who have served us.”

To be eligible for the program, participants have to be charged with criminal offenses stemming from addiction or other mental health disorders related to their military service, according to the Supreme Court of Appeals. Those people will receive treatment specific to their specialized needs with the same structure and accountability as in regular Adult Drug Court.

Meanwhile, other adult drug courts in West Virginia are working to add the military service track.

Weld thanked retired First Judicial Circuit Probation Officer Jim Lee for suggesting the establishment of the court program. Lee, who also attended the event, is a Vietnam War veteran and one of the founders of the first drug courts in West Virginia about 20 years ago.

“Jim brought this piece of legislation to me and really talked about the importance of it,” Weld said. “We see a lot of veterans around the state who have issues connected to their time in service, whether it be a mental health issue, substance abuse issues. And that’s what this court program is really designed to help, those who have served who have come back and had an issue because of their time.”

Weld also thanked all members of the Supreme Court of Appeals for their support.

“I felt it was extremely important to bring them into the process,” Weld said. “I wanted to make sure that they were comfortable in what we were doing and what we were doing was going to work. Without them, I doubt we would’ve got something that crossed the finish line, so I want to thank them for their help.”

Hutchinson said in a press release from the Supreme Court that the service member courts will be a big help in the state.

“Drug courts in West Virginia are an indispensable tool available to judges to help combat the drug epidemic,” Hutchinson said. “Military Service Members Courts are an important part of that and will help those individuals dealing with drug abuse as well as mental health issues. It is clear that these programs save lives. It is an obligation of the courts to assist our military veterans in addressing their special needs.”