‘Serving those who served’ 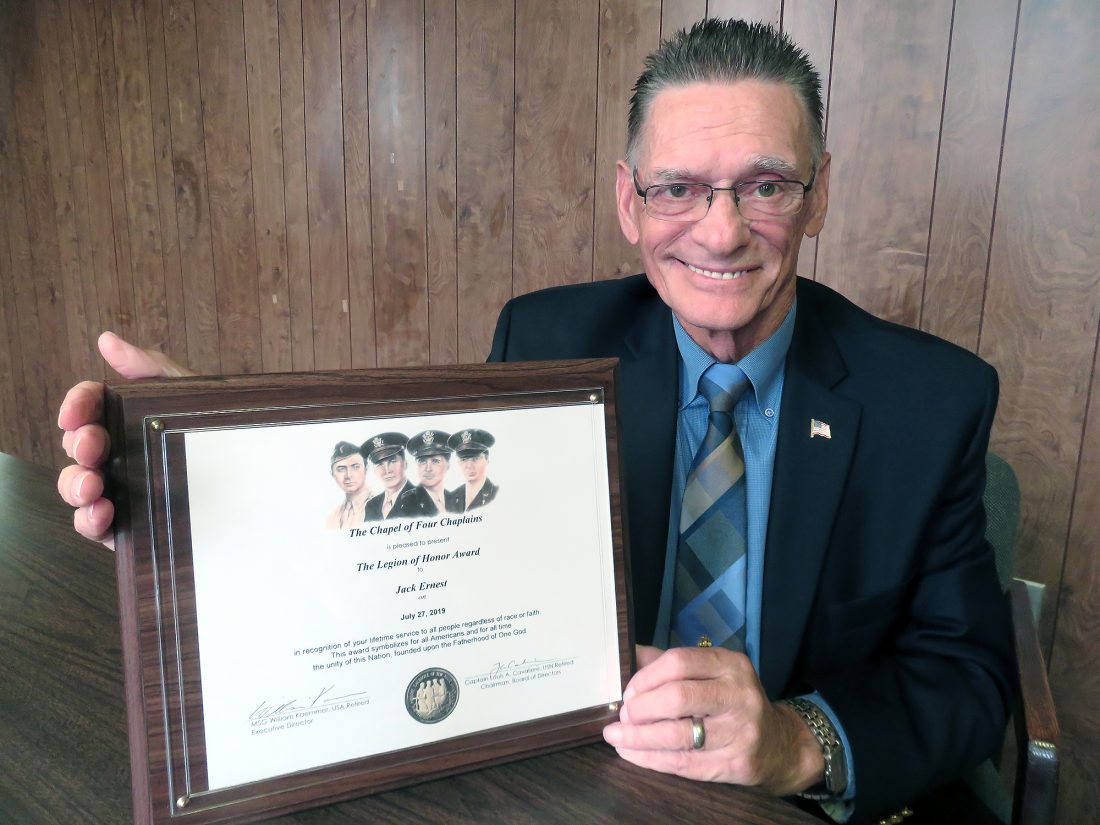 RECOGNIZED — Marine Corps veteran Jack Ernest of Richmond, who serves as president of the Jefferson County Veterans Service Commission, recently was presented the Legion of Honor Award by the Chapel of Four Chaplains in Philadelphia in recognition of his lifetime service to all people regardless of race or faith. -- Janice Kiaski

STEUBENVILLE — Jack Ernest might never visit the Chapel of Four Chaplains in Philadelphia, but that’s where his name has been newly etched on the wall.

And that distinction makes the caught-off-guard Marine Corps veteran honored, humbled and committed anew to what the president of the Jefferson County Veterans Service Commission identifies as his mission — serving those who served.

The Richmond resident was nominated for membership in the Legion of Honor of the Chapel of Four Chaplains by Michael Novotney, veterans outreach specialist for the Wheeling Vet Center, U.S. Department of Veterans Affairs.

The award program recognizes “ordinary people who do extraordinary things,” applauding “selfless service in many, many forms throughout our communities, schools, veteran service organizations and neighborhoods,” according to its website. “This program recognizes the many veterans who are performing selfless acts for many of our wounded and disabled veterans. We are averaging more than 400 Legion of Honor inductees internationally on an annual basis.”

“As a recipient of the Legion of Honor Award, you are a source of pride and inspiration for the Chapel of Four Chaplains as well as those who come into contact with you,” wrote William Kaemmer, executive director, in his award acknowledgment letter. “We are happy to have your name added to our Honor Roll. We encourage you to continue the selfless service which brought you to our attention and moved us to recognize you publicly.”

Ernest said he was unaware of the award or the chapel.

“Michael (Novotney) said in Philadelphia, there’s a chapel that called the Chapel of the Four Chaplains, and this is a picture of it right here,” Ernest said, “and inside this chapel there is a wall, and everyone who is inducted into this, their name is etched on that wall, so now my name is on that wall in Philadelphia.”

The story behind the chapel is one Ernest finds amazing and humbling.

A national nonprofit organization, the Chapel of Four Chaplains “is founded upon one shining manifestation of our heritage — that four Army chaplains who, after giving their life jackets to soldiers who had none, linked arms with one another and went down with the USAT Dorchester after it was torpedoed on Feb. 3, 1943,” according to award presentation remarks. The four chaplains were George L. Fox, Alexander D. Goode, Clark V. Poling and John P. Washington. “It was an heroic act aboard the Dorchester, but it was especially significant because of the identity of these four young men — two Protestants, a Catholic and a Jew. Today, as it has these many years, the Chapel of Four Chaplains serves the memory of these brave men and carries their message of interfaith cooperation and selfless service to every part of our country,” the remarks note.

Since the late 1940s the Chapel of the Four Chaplains has been preserving and promoting the story of the four chaplains and encouraging selfless sacrifice and interfaith cooperation. On Feb. 15, 2001, it moved to 1201 Constitution Ave. in Philadelphia, the site of a World War II Navy Chapel.

“This is not only a veteran thing, but it’s for people who work in their communities, who have given back, who do work with other groups and organizations that help people, that serve people,” said Ernest, who called the honor “probably the highlight of my career.”

Ernest enlisted in the Marine Corps in July of 1965 and served in Vietnam in 1966 and 1967. He was trained in the Vietnamese language and served in various capacities, including as a squad leader, a radio man and later as chief scout for his battalion.

He also served as an interpreter, translator and interrogator and was in charge of the POW camp for his battalion. On July 24, 1967, he was wounded in a night attack that resulted in hand-to-hand fighting.

An active voice and advocate for veterans, he received and honorary Doctor of Divinity Degree in 2005 from Omega Bible Institute and Seminary for his more than 40 humanitarian return trips into Vietnam and his continued work among his fellow veterans nationwide. Ernest was named “Veteran of the Year” for 2007-08 and was inducted into the Veterans Hall of Fame for the state of Ohio on Nov. 8, 2012. He is the founder and president of We Believe Ministries International and has served as chaplain for the Vietnam Veterans Support Group since it was founded.

In April of 2016, Ernest was appointed as a Jefferson County Veterans Service commissioner to fill an unexpired term for a previous commissioner. In January 2017, he received his second appointment to it and is now its president.

Ernest found out about the honor in a surprise setting, during a stand-down he recently attended at the Zion Christian Retreat and Nature Center in Flushing.

“They kept it secret from everyone,” he said, explaining what a stand-down is in a military framework. “It’s when you came back from literal fighting to a rural area with gear where you’re safe, you could have a time to stand down from fighting, take a rest, get some sleep, get some good food. They call that a stand-down.”

Ernest said it has been his tradition of more than 20 years to have stand-downs at his home — occasions where veterans gather for camaraderie.

“I have the acreage to do it, and I have a stand-down twice a year at my house for veterans to come and meet for three days, and we have food and fellowship and just sit around and talk, and if you have an issue or a problem, we might take a walk through the woods,” Ernest said. “I have trails all through the woods where you can talk,” he said of an atmosphere conducive for sharing and counseling.

The stand-downs typically involve as many as 18 to 24 veterans from Ohio, Pennsylvania and West Virginia.

“We’ll start on a Wednesday and then we hang out Wednesday night and have a bonfire and sit around, and everybody brings food, and we sit around and have food and fellowship,” Ernest said. “Thursday afternoon, usually around 3 o’clock, we have a flag retirement ceremony,” he said, noting that wives and girlfriends have since been invited to participate in that as well.

“We call it the big day,” Ernest said of the pre-ceremony feast of steaks and such followed by the flag retirement ceremony. “We have a burn pit and level ground to where disabled veterans can walk to or if they have motorized chairs they can get around. We burn the flags, the proper way to retire a flag, and after the coals cool down, we scoop them up and put it in a container and take them out into the woods — like I said I have so many trails, beautiful ones you can walk and enjoy wildlife — so we walk out there, and I have a place where we inter the ashes.”

In his capacity as a chaplain, Ernest conducts the ceremony.

The stand-downs can be a mix of silly and serious.

“We might just be talking and someone says, ‘Jack, you remember when we was in Vietnam, was you ever on Hill 551?'”

Ernest said the question can be the springboard for some soulful sharing.

“Sometimes, we end up out in the woods sitting on a log, and I end up praying with this person, counseling with them and talking with them, and that’s who I am — it’s what I do,” Ernest said.

Wherever he goes, Ernest is mindful of veterans in his midst.

“I’m always out and about and whenever I see a veteran, if he’s got a (military) shirt or hat on, I always engage that person,” he said, noting a newer routine is meeting with some veterans at the McDonald’s in Wintersville, having lunch and coffee and conversation.

“You know what’s sad is this late in the game, 50 some years afterward, I’ve run into Vietnam veterans that still don’t know that they have benefits,” Ernest said with a mix of amazement and sadness, noting there are 6,000 veterans in Jefferson County.

“Unbelievable,” he said, stressing the importance of calling the Jefferson County Veterans Service Commission Office in Suite 310, 500 Market St., for inquiries and assistance. The number is (740) 283-8571. His e-mail is jackernest@aol.com.

Raising awareness, helping veterans with information and assistance, being a chaplain — “I am just continuing in my life to serve others — that’s our motto for the commission, serving those that served, but I’ve been doing this for 40 years,” Ernest said.

Asked what his greatest sense of satisfaction has been in helping veterans during the past four decades, Ernest gave thought to the question.

“The joy or satisfaction is helping other people. I’m a minister and I preach all over the United States and used to work overseas and did 40 plus trips to Vietnam, and I took a lot of veterans back for closure and healing, and we worked with the underground church in Vietnam, running to keep from the Communist police and hiding in haystacks,” he reminisced, chuckling at the thought of that mental picture.

“Life has been interesting,” he said.

“It’s what God wants us to be — a servant, an instrument in his hand.

“If he wants to write something, let’s be a pen.

“If he wants to work on a car, I’ll be a crescent wrench.”

Ernrest said he gets calls for assistance all the time.

“I am a chaplain at the Weirton hospital, for AMVETS (Post 275) and for the Vietnam Veterans Support Group plus I preach.”

At 73, Ernest said his work continues in a mission reaffirmed.

“Be willing to be a servant,” he said.

“Be willing to give of yourself to help others.”