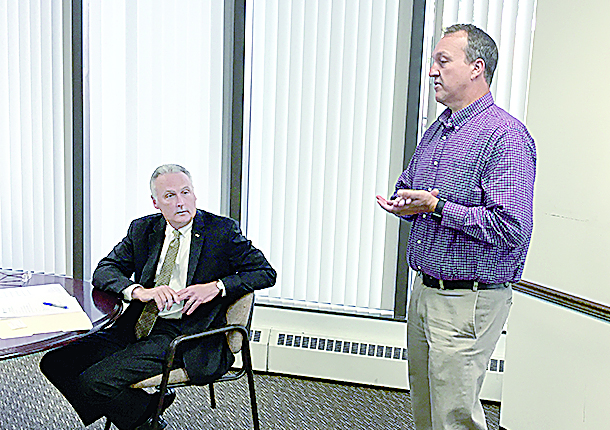 GAS STATION UPDATE — Brent Smith of CEC Inc. of Columbus, standing, Wednesday explained to members of the Jefferson County Port Authority what has to be done following the removal of 10 fuel tanks on South Third Street. Listening is Jay Zatta, a port authority member. -- Mark Law

STEUBENVILLE — The Jefferson County Port Authority is looking for a new executive director after a personnel shift was announced Wednesday.

Evan Scurti, who has held that post since December 2013, has been shifted to a part-time role as incentives manager, port officials announced. Board member Robert D’Anniballe is in charge of assembling a team to conduct the search, according to Jay Zatta, who served as chair for Wednesday’s meeting.

Scurti will work 25 hours a week and be paid an annual rate of $40,000, half of what he was making as executive director.

Zatta said the compensation of the new executive director will be negotiated once a candidate has been selected to replace Scurti, who has been the only executive director the port has had since it began operations in 2013. He said naming Scurti as incentives manager will guarantee a continuity of operations.

Scurti said it was he who came up with the proposal for the shift to incentives manager. Zatta said the decision was a mutual agreement between Scurti and the port authority.

“Evan wants to do other things. The port authority needs to move on with naming an executive director,” Zatta said.

Scurti said he wishes the port authority well in the future.

“I’m glad to be a part of it. I’m excited with new opportunities outside the organization. I’m excited about my career in general and the great opportunities. The port authority needs to be here for future economic development,” Scurti said.

Other port authorities have a similar arrangement with a part-time employee also doing work outside the organization, such as consulting work, Scurti added.

Last week, members of the port authority board met in executive session to discuss personnel, and announced afterward that no decisions had been made. Board members met for about 35 minutes in executive session on Wednesday without Scurti before he was called in for the last several minutes.

Members also were given an update on soil work being done following the removal of 10 fuel tanks on South Third Street.

The port authority received a $250,000 grant through the Ohio Development Services Agency to remove the tanks, which date back to the 1920s. The tanks were removed at the end of January.

Scurti said he contacted the Ohio Development Services Agency on behalf of the Ohio Motor Group, the property owner, concerning gasoline tanks buried on the property, which sits across the street from the former Hanna Chevrolet. Ohio Motor Group purchased the property without knowledge of the tanks, Scurti said. Since nobody who originally was associated with the gasoline tanks could be found, the port authority was able to tap into state funds to have the tanks removed and remediate the soil, Scurti said.

Ohio Motor Group has to pay a fee equal to 5 percent of the grant money used.

Brent Smith of CEC Inc. of Columbus, the port authority’s consultant, said the site will still have to be assessed to determine if any fuel remains in the ground. He said that is the final stage of the investigation. The remediation stage will include the removal of some soil, Smith said.

The port authority is applying for a second grant for the remaining work, which is expected to be completed early next year.

Port member Greg Nemeth said he needs to know the dollar amount of the work yet to be done.

“We need to be ahead of the project instead of being behind it,” he said.

Scurti said the property will then be marketed for development.