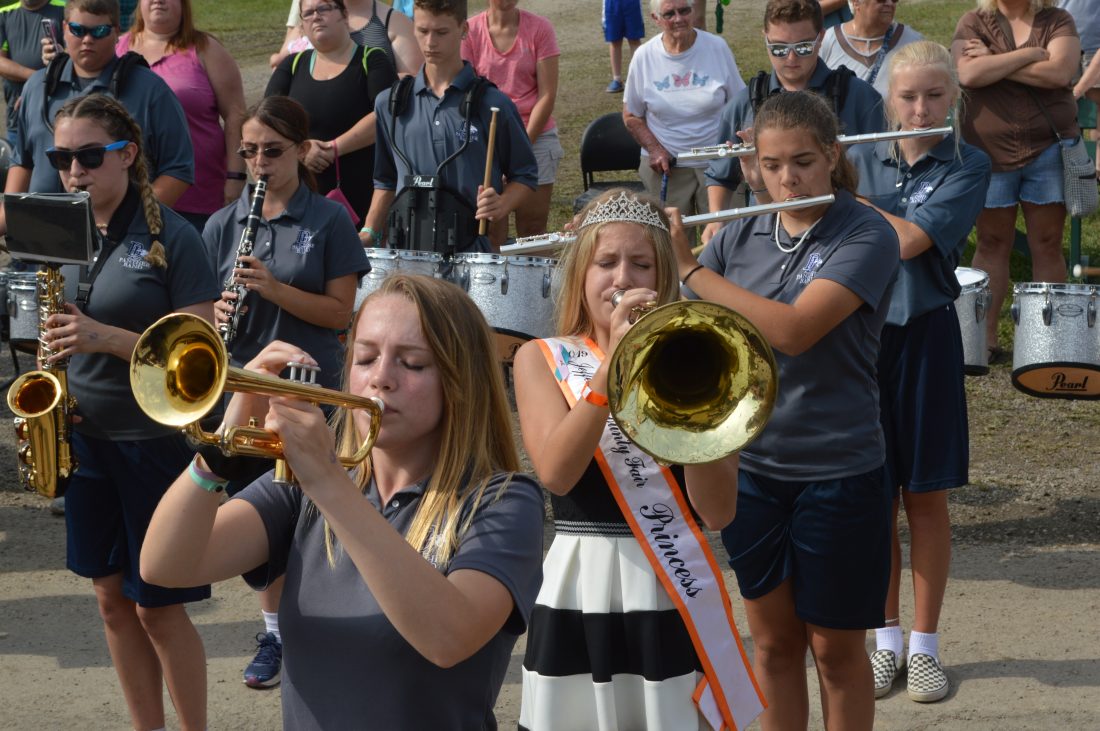 SMITHFIELD –˜The “Happy Fair” showed off some of the youth that make the county strong in its annual Grand Parade, Saturday. This year’s parade theme was “building the future” and the local high school bands, fair royalty and 4-H clubs proved the future will be bright.

Nineteen 4-H clubs took place in this year’s event from all over the county.

Some groups chose to personify this year’s “building the future” theme in their entries. The Liberty Gals and Guys and the Dirt Diggers both showed off their construction gear. The Cross Creek Tommahawks, Broken Fences, and 43 Ramblers all chose to incorporate Lego building blocks in their floats.

The Warren Ridge 4-H used masks similar to the lego movie for their float, but they also choose to use their entry to honor Gary Cain.

Cain, who died Feb. 4 at the age of 81, volunteered as the auctioneer at the junior fair for more than 60 years. The Livestock Barn 8 has been dedicated in his memory at the fair grounds.

Others took the traditional route. The Town and Country 4-H and 4-H Varieties groups both marched along the parade route with their goats. The Happy Hooves and Fancy Feathers and Country Classics marched with horseback riders.

The Country Rangers turned things up with horse and buggies. Chesney Swickard, who is a member of the group, marched with her llama, Aunty.

The Lassos and Lace group choose to use a garden to show how they are growing.

Some combined the themes, the Golden Horseshoes marched with both building blocks; and a goat; dog; and rider on horseback. The County Roadrunners used a NASA theme but also marched with chickens raised by the participants.

Other 4-H groups in the parade included; the Free Spirits; Windy Ridge; the Country Shamrocks; the Friends and Neighbors; and the Lucky Leaf.

“It was fun,” Annalyn Rhine, CCHS, said of playing in the parade.

“This is my third year,” he said. “I am just enjoying it plus we get to go to the fair after.”

This year’s grand marshal was Janine Yeske. Yeske retired as the county 4-H Extension agent this year after serving the area for 20 years.

“She was fantastic (as the agent),” parade judge Wendee Dodds said.

This the 148th year for the fair which runs through today.