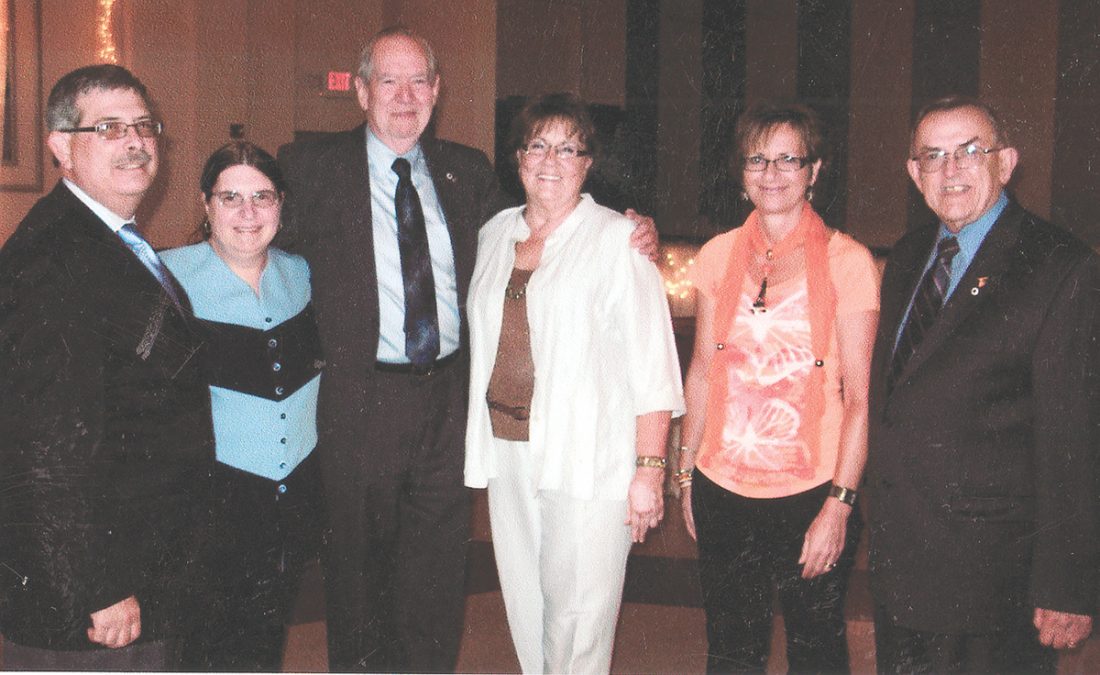 STEUBENVILLE — Judy Bratten recalls the day in 2003 when she found out she’d landed the job as executive director of Historic Fort Steuben.

“Chuck Govey was the one who called me,” she said. “He sounded so happy when he told me. I’ll always remember the happiness in his voice. And from that day on, he was such a support, such a source for wisdom.”

Govey, a well-known community cheerleader and former publisher of the Herald-Star, died Tuesday after a lengthy battle with cancer. He was 78. Services were held Saturday at the Chester Church of the Nazarene.

Friends say his death is “like losing a member of the family.”

“He just cared so much about people,” Betty Ferron, director of Jefferson County Job and Family Services, said. “He was a true gentleman: I feel so blessed to have known him and to have been able to work with him, but, most of all, to call him my friend.”

“I knew Chuck since he started here in 2001,” Ferron said. “But I didn’t work closely with him until I became director. I can honestly say he never came in the door in a bad mood. Never. And there were days when I was waiting for him by the front door and would say, ‘Chuck, you’ll never believe what happened …’ But he never looked at those things as problems, they were always opportunities.”

Mike Mehalik, former superintendent of Jefferson County Board of Developmental Disabilities, remembers Govey as “just a wonderful man, dedicated to his community.”

“Whenever Chuck decided to assist with a project, he stayed involved until the completion of that project. That’s one of the things I admired most about Chuck: He was a member of the Salvation Army board for many years, and he always urged Rotary members to ring the bell for them in the Christmas season — he continued to do it throughout his life, even after his term on the board had ended. He was just really committed to whatever projects he was involved with.”

Govey spent decades in the newspaper industry, including 13 years as publisher of the Herald-Star beginning in 1980. He was active in the community on many fronts. He was a longtime member of the Steubenville Rotary Club, the Salvation Army board and was involved with chambers of commerce throughout the region. He also helped in the formation of the Lou Holtz Upper Ohio Valley Hall of Fame and served as its director at one point.

“He was just a great community person,” Keenan added. “I think if I had to pick a few words to describe him they would be ‘a real leader in the community for a long period of time.’ He was a tremendous person, a great friend and a great family man, no question about it. His emphasis was on community, and if he got involved with something he was indefatigable. He’d stay with it.”

Govey, a native of Chester, also was instrumental in the reconstruction of Historic Fort Steuben.

“My dad was one of the original founders of the fort, along with Chuck Govey, and he thought he was just such a great person who gave back to the community,” she said. “He was always there first to volunteer to help any way he could.”

Young said she had worked with Govey on several newspaper projects years ago in his publishing days, “and he was just a class act. He was a good man, so community minded.”

“I was a teaching principal at Buena Vista when he moved into a house behind the school,” Joyce recalled. “He was always so supportive. Any time I needed someone to work on a project he was always available. You’d never know he published a newspaper, he was just so unassuming. He was an everyday guy. I think that’s what I liked about him, he was never pretentious.”

Joyce said when he was named district superintendent in 1993, the paper ran an editorial that was very complimentary.

“Maybe four or five months later I was a guest at Rotary,” he said. “We talked a bit, I finally asked him how I was doing. He gave me a thumbs up, told me to just keep doing what I’d been doing. He probably would never have remembered that, but to me, it was just so important because he had standing in this community. Remembering how good he was to me and how good he was to the schools, that’s what I’ll remember most about him. He was such a good man.”

Steubenville Mayor Jerry Barilla, president of the Old Fort Steuben Project, said Govey was “always the glue, the rock we could always go to for advice.”

“When he was diagnosed, he said he was going to fight it because he still had things to do,” Barilla recalled. “He gave his full breath to fighting it. He was determined not to let it take him down. I admired his tenacity and perseverance, his strength at a time that was extremely challenging. His nature was not to fold to adversity, but to attack it. There were people who would have given up but he wasn’t one of them. He fought to the end.”

Barilla said his friend drew strength from faith and family.

Bratten pointed out that even though Govey had been unable to attend many meetings in recent months, “he would still call and give us his opinion and advice.

“One of his greatest frustrations was that with his illness, he couldn’t continue doing what he had been doing for so many organizations,” she noted.

At the Herald-Star, Govey is being remembered for his larger-than-life presence.

“I remain thankful that Chuck was willing to take a chance on me,” remembered Ross Gallabrese, executive editor of the Herald-Star and The Weirton Daily Times.

Govey signed off on his hiring as a sports writer in February 1981.

“I was not that far removed from Ohio University and was a little unsure about where I wanted to go with my life,” Gallabrese remembered. “He told me that my greatest asset would be that I had grown up in the community and had strong ties to the area. He was right — living in and being involved with the community helped to get my career started and has remained important in all the years that have passed.”

“There is great responsibility that comes with working for a community newspaper,” Gallabrese said. “That was something Chuck never forgot. He loved the business of newspapers and everything that went into them. He appreciated good writing. Whether it was a profile of a local resident or a piece that was critical of a politician, Chuck knew it was important that those stories be told.”

“I’ve known him for 24 years,” Hale said. “He was very involved in the Ohio Valley and the city of Steubenville. He worked hard to make the community better and felt the newspaper had an obligation to be a part of the process.”

Longtime community editor Marian Houser recalled how Govey “played a lot of roles in my years at the Herald-Star, first as advertising manager, later as publisher and always as a friend.”

“Longtimers in the newsroom had a habit of stockpiling little stories, funny memories, about our favorite people who passed through the paper’s doors over the years,” Houser said. “We had some wonderful ones about ‘Mr. Govey’ that made us smile, but I think if you asked any one of us to describe him in a few words, I think it would be, ‘He was a good man.'”

Community Editor Janice Kiaski, a Herald-Star employee for close to 40 years, said she would think of Govey with part affection, part amusement, every Christmas when she’d buy a poinsettia.

“I remember in the early 1980s, when Mr. Govey came through the double doors of the newsroom one day around Christmas, red-faced and waving that day’s newspaper in his upraised right hand, unnerved because poinsettia had been misspelled on the front page of the paper – ‘Don’t you people know how to spell poinsettia?’ he had demanded,” Kiaski recalled.

Though it hadn’t been her error, Kiaski said she nonetheless committed to memory the proper spelling, having her own internal spelling bee from that day on whenever she’d purchase the holiday flower.

“He was always supportive of the newspaper and a source of encouragement for me, appreciative of stories I would do, and he’d tell me so,” Kiaski said, describing Govey as a part of what was the Herald-Star newsroom family.

“That was reaffirmed for me when my mom died last year, and there in line to pay his respects was Mr. Govey,” said Kiaski, who was as surprised as she was moved by the gesture.

That it would be her turn to stand in line to extend condolences is a bitter pill to swallow.

“As newspaper people who have been in the local print industry for decades, we are the unofficial historians of community news, and unfortunately, that includes noting the passing of special people in our area, Mr. Govey being chief among them,” Kiaski said.

Mark Law, who started working for the Herald-Star in 1985 while Govey was publisher, said his impact on the community was immeasurable.

“Chuck’s legacy in the community will live on for generations,” Law said. “Most saw it as a gravel parking lot on Third Street. Chuck and a few others had the vision of what today is Historic Fort Steuben. It will be used and enjoyed for decades to come. He cared deeply about the community, helping others, and, most important, being a living definition of a gentleman.”

Mehalik, too, said he can’t help but remember how years ago, the developmental disabilities board was “in a tough situation” and he turned to Govey for encouragement.

“It was one of those situations where it was causing me a lot of stress,” Mehalik recalled. “I can remember Chuck telling me, ‘Tomorrow’s going to come, Mike. And tomorrow will be better.'”