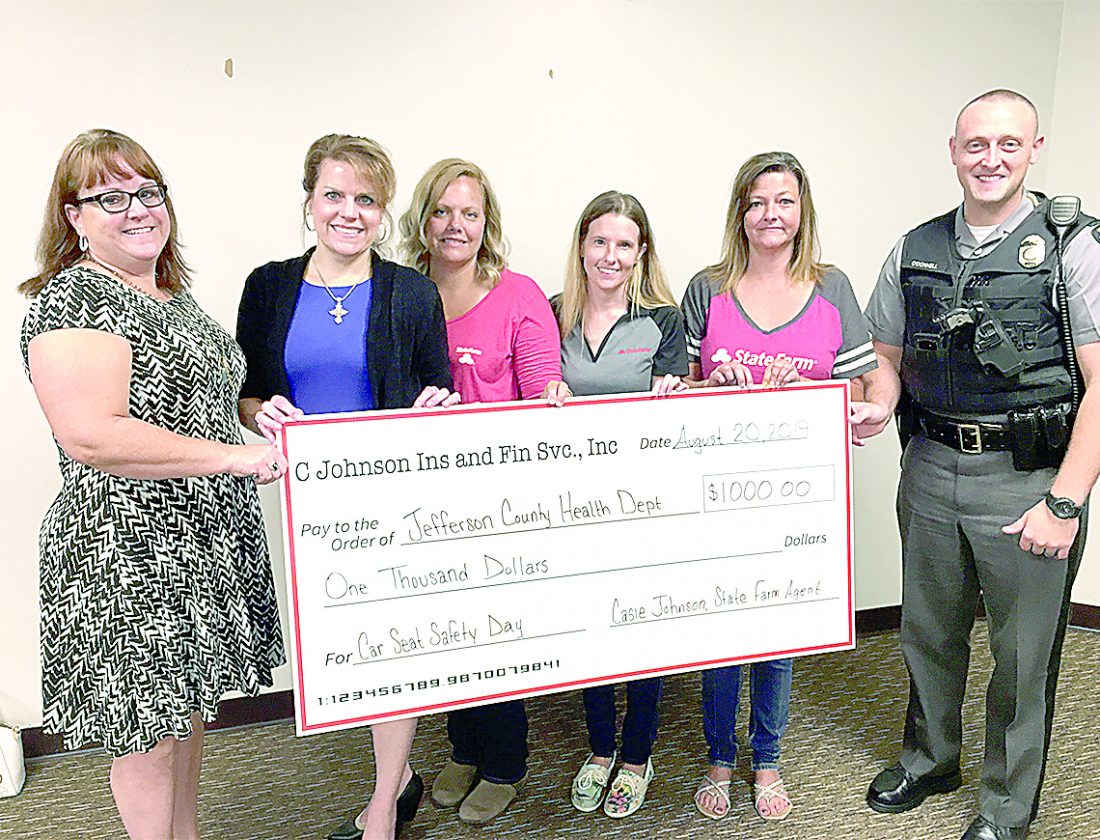 CAR SEAT CHECK — The Casie Johnson State Farm Insurance Agency in Wintersville on Tuesday presented a $1,000 check to the Jefferson County Health Department in support of the department’s child car seat safety program. The agency again will sponsor a child car seat safety check, in conjunction with the Ohio State Highway Patrol and the health department, from 10 a.m. until 2 p.m. on Sept. 28 at the Ohio Department of Transportation garage on county Road 43. Taking part in the check presentation were, from left, Carla Gampolo, health department sanitarian who will be trained in checking child car seats; Nicole Balakos, health department commissioner; Katie Rawson of the insurance agency; Johnson; Candy Sutherin of the insurance agency; and state patrol Trooper Josh O’Donnell. -- Mark Law

The rabies vaccination drop will cover 4,825 square miles of the state’s northeastern and eastern border, primarily targeting raccoons, according to the state health department. Approximately 800,000 baits will be distributed by air or ground.

Maragos said no baits will be distributed by hand in Jefferson County.

Maragos cautioned residents about approaching an animal with one of the baits in its mouth. He said dogs will not be harmed if they consume the bait. He told residents to check areas around their houses for additional baits. People should wash their hands after handling any of the baits.

Residents with questions about the bait drop can contact the state health department at (614) 752-1387.

The health department board agreed to sent a letter of support to the Jefferson County Soil and Water Conservation District about a state grant the soil and water conservation district receives to replace faulty septic systems for income-eligible residents.

The health department oversees the installation.

Maragos said 47 septic tanks were replaced last year and nine more will be replaced this year.

Maragos said 62 odor complaints were received in July about the Apex Landfill, with 21 complaints so far this month.

Nicole Balakos, health department commissioner, got approval from the board to reduce the number of days for the Bergholz clinic. The clinic will only be open one day per week, as opposed to two days, with the Bergholz Community Foundation paying for the utilities with the exception of phone and Internet. Balakos said the health department had been paying about $1,000 a month in utility costs but has been seeing a limited number of residents for services. The health department will be adding Women and Infant Children services to the clinic.

Balakos said the department is seeking to expand its services in the community, including having evening and Saturday hours once a month.

All health department services will be available on the fourth Wednesday of the month from 4 p.m. to 7 p.m.; and the second Saturday from 8 a.m. until 11 a.m.

Balakos said Toronto also is seeking additional services from the health department at the city’s clinic, including WIC and immunizations for city workers.

Balakos asked the board for permission to hire additional staff, including a grant writer, administrative assistant, part-time sanitarian, and for new hires to replace workers who have left.

Dr. Pat Macedonia, the newly appointed board member, questioned why the salary of the new hires isn’t listed. He voted against the request, with the rest of the board voting in favor.

The grant writer will be part time, but Culp said she wants the position to transition to full time in the future.

Balakos noted several positions are unfilled at the department, which could have an impact on the department’s accreditation efforts.

Culp reported there were 12 new cases of hepatitis A, one new hepatitis B case and 11 new hepatitis C cases. She said the health department has been offering hepatitis A immunization clinics at the Urban Mission.

Culp said there were eight new Lyme diseases cases. She said the increase is expected at this time of the year.

The health department held a nuisance complaint hearing concerning garbage outside a residence at 1919 county Road 2, Yorkville. Colt Barton and Amanda Neer are the tenants and the house is owned by Brent Barton. Neer said a garbage hauler has been hired, and Brent Barton said he will remove the accumulated garbage and debris.

The health department gave until Sept. 4 for the property to be cleaned up, and receipts shown for hauling the garbage away to a landfill, in addition to the regular garbage service.