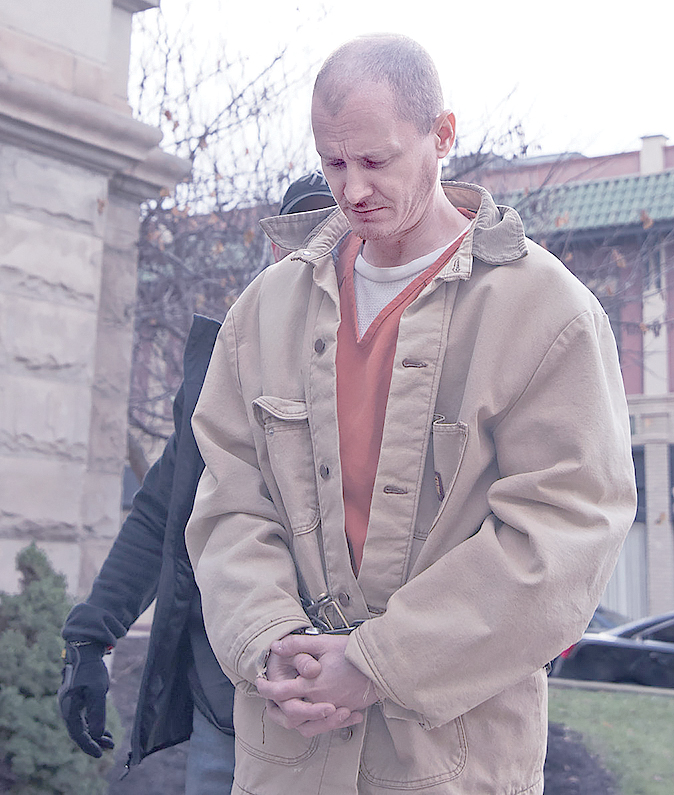 COURT — Chad Spence is escorted into the Washington County Courthouse for a preliminary hearing in December 2018. -- Celeste Van Kirk

WASHINGTON, Pa. — She was a wife, mother and grandmother who went to work June 6, 2018, anticipating her son’s wedding and a family vacation, but her life ended all too abruptly.

Sobs wracked a Washington County courtroom Tuesday as the family of Kimberly Dollard, 57, of Amwell Township spoke of her lovingly before Judge Valarie Costanzo passed sentence on Chad Spence, 44, of Weirton.

Spence entered “no contest” pleas after being behind the wheel of a Jeep that crashed into Neighbor Health Center, killing Dollard, and, months later, David Adams, then 86, of Washington, who was about to leave the facility on Leonard Avenue.

Adams died Jan. 30 at South Hills Rehabilitation Center, where he had been a patient since his hospitalization the day the Jeep careened through a wall.

Costanzo ordered Spence to spend 6¢ to 13 years in prison for Dollard’s death, followed by 10 years of state probation for the death of Adams.

“This sentence is harder for me than for you,” son Dale C. Dollard read on behalf of his father, Dale M. Dollard.

“My sentence is life.”

Jackie Shriver, Kimberly Dollard’s sister, said, “Whatever the penalty is, it will never be enough. He will get out and will be able to share holidays with his family” while Dollard’s family will have only trips to a cemetery.

Addressing the defendant, Shriver said, “If you would’ve just swerved to avoid hitting the building, none of us would’ve been here today.”

His mother’s death cast a pall over his wedding, said Dale C. Dollard, and his infant daughter will never know her grandmother.

April Thompson, the victim’s daughter, had her husband, John Thompson, read a statement on her behalf:

“I remember the events of June 6 as if it was yesterday,” he said. “I walked into my parents’ home knowing my mom would never set foot in that house again.”

The judge asked Spence if he wished to exercise his right to address the court, but he declined.

After ordering Spence to pay restitution for funeral expenses, she told sheriff’s deputies to immediately transfer Spence to the State Correctional Institution at Greene County for classification purposes.

Investigators said Spence’s Jeep Liberty descended Sharp Avenue in Washington fast enough for it to become airborne before it sailed through a wall of Washington Health System Neighbor Health Center and into an area where patients register for services.

Dollard was pronounced dead at the scene, while Adams was injured and flown to UPMC-Presbyterian hospital in Pittsburgh.

Spence allegedly told the detective he’d been in town for an appointment at a Suboxone clinic on Locust Street a block away.

He was taken to Washington Hospital, where he was released after a few hours.