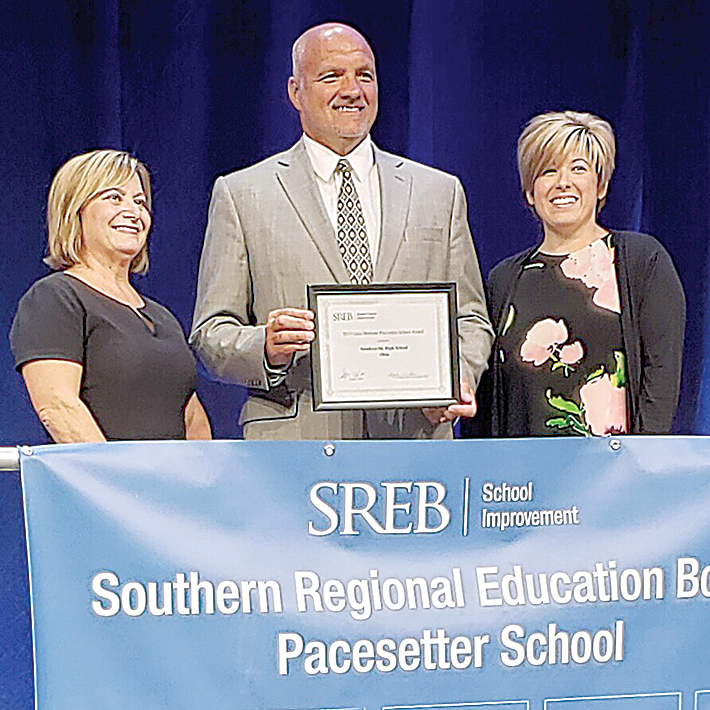 SCHOOL RECOGNIZED — Steubenville High School was one of four schools from the state honored by the Southern Regional Education Board on July 10. The school was awarded the Pacesetter Award for its College Credit Plus Program and for helping “economically disadvantaged and underrepresented students.” Accepting the award, from left, were Superintendent Melinda Young, Steubenville High School Principal Ted Gorman and CTE Educator Amy Parikakis. -- Contributed

STEUBENVILLE — Steubenville High School was one of four schools in Ohio to be honored by the Southern Regional Education Board.

The school was given the Pacesetters Award in a ceremony in Baltimore on July 10. The ceremony was a part of SERB’s “Making Schools Work” conference.

The school was given the award for its College Credit Plus Program, through which students can earn college credits while attending regular classes at the high school. More than 40 percent of students at the school take part in the program.

SERB also recognized the school for what it is doing for the “economically disadvantaged and underrepresented students” in the school.

According to officials with the group, “Steubenville High has broadened participation in career pathways leading to high-demand careers among economically disadvantaged and underrepresented students.”

They added the school has 450 students who have participated in at least one career path.

Young said one highlight of the event was listening to recent graduates give their opinion on what makes a great school.

“Five local students talked to us about what they wanted to see in the future,” she said. “They wanted less lecture and more hands-on. Every student who spoke named one teacher who made a difference in their life.”

In other business, the board approved:

¯ Salary adjustments for Catherine Baker and Emma Simmon, both of whom received their master’s degrees;

¯ Entering into a contract with other school districts to serve low incidence disabled children who are not residents of the district;

¯ A salary scale for a clinic therapist;

¯ A contract with McKinstry and Associates for student accident insurance for 2019-20;

¯ Membership with the Jefferson County Chamber of Commerce; and

¯ A change order for the Wells Academy playground equipment with DWA Recreation.