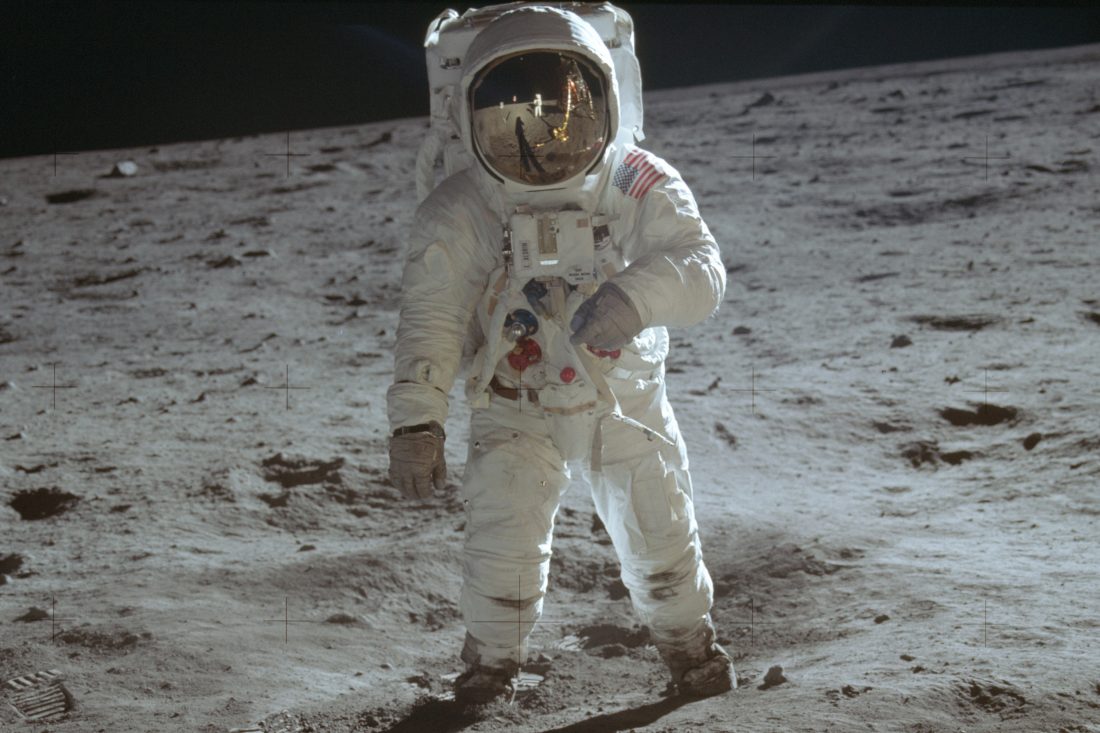 In this July 20, 1969 photo made available by NASA, astronaut Buzz Aldrin, lunar module pilot, walks on the surface of the moon during the Apollo 11 extravehicular activity. (Neil Armstrong/NASA via AP)

They gathered in the Oval Office with President Donald Trump, who got a rundown on his administration’s plans to get astronauts back on the moon by 2024 and then on to Mars in the 2030s.

“We’re bringing the glamour back” to the space program, Trump said.

Both sons of the late Neil Armstrong, the first man to step onto the moon on July 20, 1969, also attended, as well as first lady Melania Trump, Vice President Mike Pence and NASA Administrator Jim Bridenstine.

The moon versus Mars debate as astronauts’ next destination arose again Friday. The president asked if astronauts could get to Mars without first going back to the moon. Collins, 88, who circled the moon alone in the command module while Armstrong and Aldrin descended in the Eagle, told the president that he supports going directly to Mars and bypassing the moon.

“It seems to me Mars direct, who knows better than these people?” Trump noted.

Bridenstine, though, stressed the importance of the moon as a training ground and noted that because of the planetary alignment, launches to Mars can occur only every 26 months and even then the trip is seven months each way.

“What happens if you miss the timing? They’re in deep trouble? Trump asked. “You don’t want to be on that ship.”

Aldrin, meanwhile, said he’s disappointed with the state of human space exploration the past 10 or 15 years. “We were able to achieve so much early,” the 89-year-old said.

Aldrin, whose specialty was orbital rendezvous, doesn’t like NASA’s idea for a small space station around the moon, called the Gateway, from which to stage lunar landings and, eventually, Mars trips. He noted that the Apollo 11 command module and attached lunar module went straight into lunar orbit and even separated and redocked around the moon.

“We have the No. 1 rocket right now in the U.S. and we have the No. 1 spacecraft, and they cannot get into lunar orbit with significant maneuvering capability,” Aldrin pointed out.

Trump directed Bridenstine to listen to the “other side.”

Armstrong was the first to climb down the ladder, stepping onto the lunar surface at 10:56 p.m. His “That’s one small step for man, one giant leap for mankind,” is arguably the most famous space line of all time.

The vice president is commemorating Saturday’s anniversary at Florida’s Kennedy Space Center, visiting the launch pad where Apollo 11 blasted off.

Museums and towns across the country geared up for their own golden anniversary celebrations, including Wapakoneta, Ohio, Armstrong’s hometown that was serving up “cinnamoon pancakes” and “buckeye on the moon sundaes.” The U.S. Postal Service, meanwhile, issued its “1969: First Moon Landing” Forever stamps Friday at Kennedy.

NASA televised a two-hour show Friday afternoon remembering Apollo 11 but also looking forward to its future moon plans. At the end of the program, Bridenstine revealed the new logo for the moon program, called Artemis after the twin sister of Greek mythology’s Apollo.

Besides Wapakoneta and Kennedy, the program went live to Johnson Space Center in Houston, home to Mission Control; the U.S. Space and Rocket Center next door to Marshall Space Flight Center in Huntsville, Alabama; and the National Air and Space Museum in Washington.

In Houston, Apollo 7 astronaut Walter Cunningham said the moon landings will be remembered hundreds of years from now and Armstrong, in particular, will go down in history.

“Here we are 50 years later, and I never in my life could have projected this amount of interest and association with what we were doing back then,” Cunningham said.

In Wapakoneta, former astronaut Don Thomas recalled how he invited fellow Ohioan Armstrong to one of his four space shuttle launches in the 1990s. Not only did Armstrong show up, Thomas said the moonwalker met with him the day before liftoff and promised to stick around as long as it took the shuttle to fly.

“It was the thrill of my life to have him there for the launch,” Thomas said.

Follow AP’s full coverage of the Apollo 11 anniversary at: https://apnews.com/Apollo11moonlanding

The Associated Press Health and Science Department receives support from the Howard Hughes Medical Institute’s Department of Science Education. The AP is solely responsible for all content.