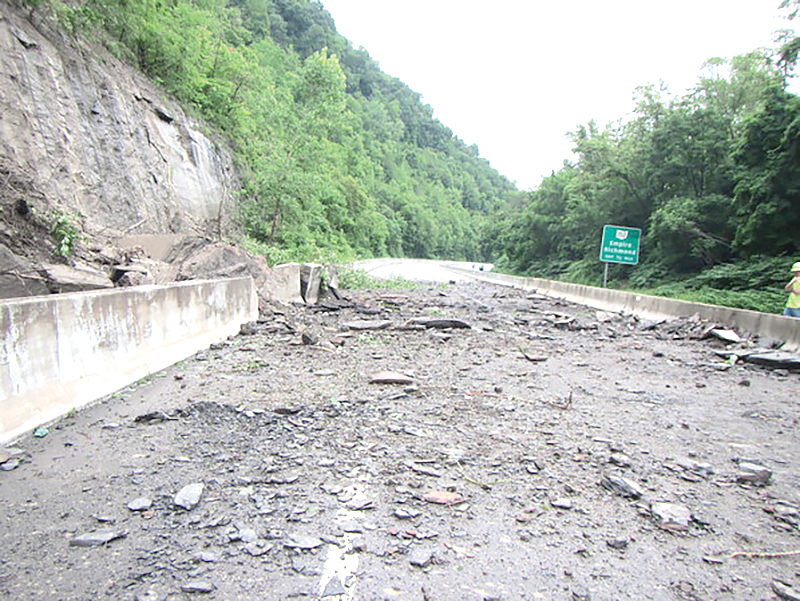 LANDSLIDE ­— State Route 7 north of Toronto will remain closed until further notice as engineers work to determine how to correct a large landslide early Thursday. The hillside continues to move, ODOT reported. — Contributed

STEUBENVILLE — The Ohio Department of Transportation reported state Route 7 north of Toronto will remain closed until further notice after a landslide went through a retaining wall and damaged the pavement early Thursday.

Ty Justice, ODOT Jefferson County administrator, said a drone is being brought in today from the Cleveland ODOT regional office to see what is happening along the hillside. He said the slope is too difficult to climb.

Justice said debris continues to fall from the hillside.

ODOT district engineers are working on a plan to correct the landslide, he said. Justice said, once that is complete, ODOT will issue an emergency contract to stabilize the landslide and repair the retaining wall and pavement.

ODOT gave no time frame on when work could begin, saying the road will not be reopened until the hillside is secured and it is safe for drivers.

Justice said another landslide occurred in the closed section of the road. It is located near the North Fourth Street exit in Toronto. He said it is in the area of electric transmission lines, but he doesn’t believe it has had an impact on the towers carrying the lines.

Drivers of cars can use the Toronto exit, travel through town to county Road 7F into Empire, where they can get back on state Route 7.