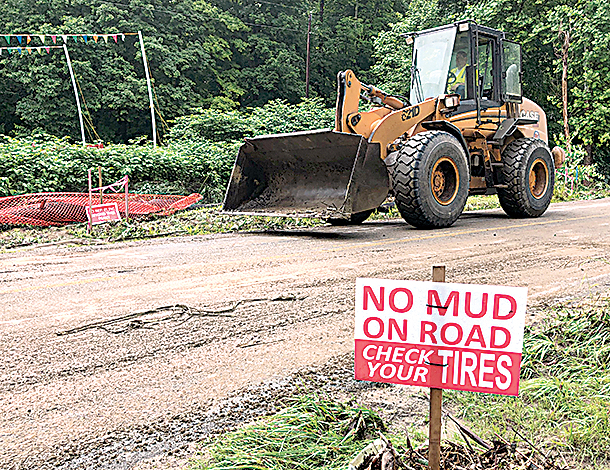 FLOODING — A worker with the Jefferson County highway department works to clear mud and debris off county Road 51. The road was closed early Wednesday after heavy rain slowly moved over the area. -- Contributed

STEUBENVILLE — State Route 7 between Toronto and Empire is closed in both directions until further notice because of a large landslide that happened early today, the Ohio Department of Transportation reported.

Ty Justice, ODOT’s Jefferson County administrator, said large rocks, mud and debris broke through a wall on the side of the road, which is intended to catch the rocks and debris. He said the pavement has been damaged and there is debris and water over the road.

Six vehicles were hit with the rocks and debris, but he doesn’t believe there were any injuries.

ODOT is planning to get a drone up in the air so crews can see what is going on along the hillside, Justice said. He said the hillside is too steep to climb.

“We need to see if anything else is falling,” he said.

If the hillside is determined to be stable, then the northbound lanes could be quickly reopened, Justice said.

The weather won’t be cooperating today as more heavy rains are predicted. The National Weather Service has a flash flood watch in place until 8 p.m. today.

Last year was the wettest year on record, but rainfall totals so far this year are only about 3 inches behind 2018 at a comparable date, according to the National Weather Service in Moon Township. Pa.

Rainfall varies by location, as evident by a slow moving storm that settled over the northern part of Jefferson County late Tuesday and early Wednesday.

Robert Herrington, Jefferson County’s 911 director, said dispatchers started getting calls around 12:30 a.m. on Wednesday about flooding in the area of Hollow Rock Road (county Road 51). He said a couple of homes and trailers were damaged by the rising creek in the area, and several private bridges were washed away.

The county highway department was called out early Wednesday to begin clearing debris from county roads in the area.

County Engineer James Branagan said county roads in the area suffered some damage, but Hollow Rock Road had the most damage. Parts of the road shoulder and pavement were washed away, resulting in the road being closed to through traffic, he said. He said the road is down to one lane in sections. Local residents and emergency vehicles will have access to the road. He said repairs could take two weeks.

“It was amazing down there. You could see how high the water was,” he said.

The recent heavy rains also contributed to a mudslide on Scott Featner Road on Monday. The Cross Creek Township trustees were forced to hire an excavating contractor to remove the debris from the road. The road remains closed to through traffic. Trustee Lou Vandeborne said it is an emergency to get the road back open because the county has closed a bridge on county Road 74, which is located near the end of Scott Featner Road.

Branagan said the county so far this year has experienced more than $4 million in road slips associated with the heavy rains.