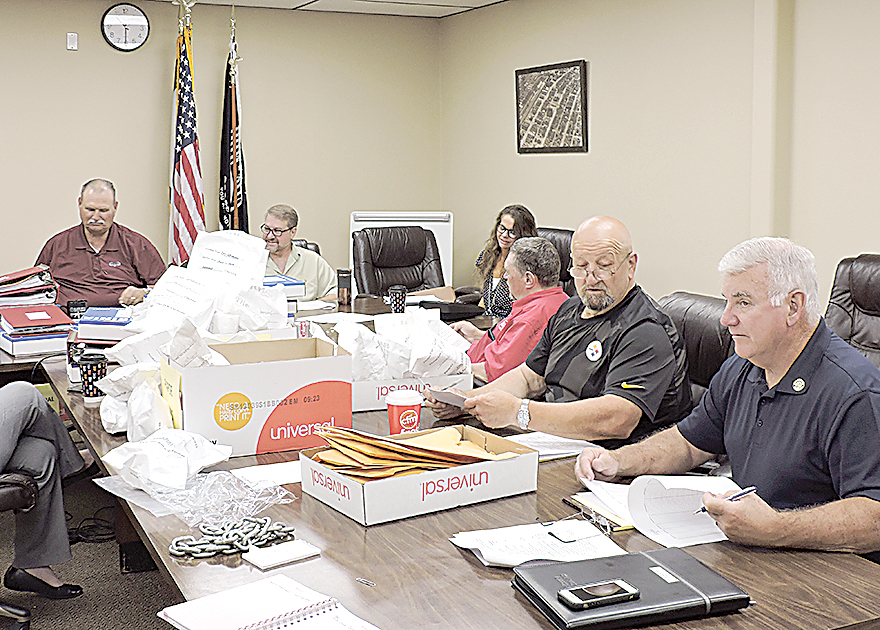 VERIFYING THE RESULTS — Weirton City Council members convene as a board of canvassing Monday to review the results of the city’s general election. The results will be certified during a special council meeting at 1:30 p.m. Wednesday. -- Craig Howell

WEIRTON — Members of Weirton Council met Monday morning to serve as the board of canvassing and review the results of the city’s June 11 general election.

Councilmembers Tim Connell, Fred Marsh, George Ash, Enzo Fracasso and Terry Weigel convened in the council chambers before moving into Room 201 of the Municipal Building to conduct the canvassing.

Mayor Harold Miller attended to call the meeting to order, and then left after Ash was appointed to serve as the canvassing board’s chair.

As part of the canvassing, a random hand-count of a portion of the results had to be conducted by the board.

The precinct, selected through a blind draw by resident Bill Curenton, was Ward 5, Precinct 2. Curenton, along with Councilmember-elect Flora Perrone, were the only residents to attend the canvassing.

The board also agreed to set a bond in the event a recount of any of the races is requested.

The final certification of the results will take place at 1:30 p.m. Wednesday in council chambers.

Following the canvassing, the results for the general election are as follows: