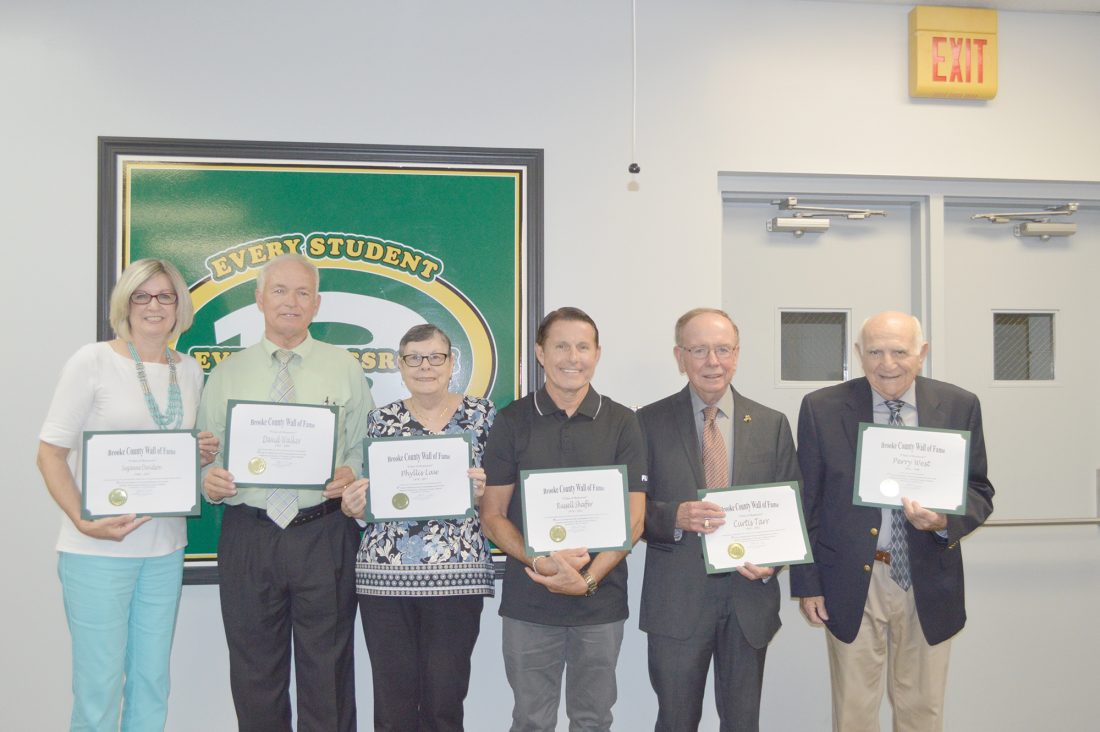 HONOREES — The Brooke County Board of Education on Monday welcomed the six new members to its Wall of Fame. The honorees were, from left, Suzanne Davidson; Kenneth Hart, who accepted on behalf of David Walker; Phyllis Law; Russell Shafer; Curtis Tarr; and Perry West. -- Amy Neeley

WELLSBURG — The Brooke County Board of Education on Monday honored six of its own for “rendering distinguished service to Brooke County schools” during the 2019 Wall of Fame induction ceremony.

“Whether a teacher or a principal, they touched the students’ lives,” event organizer Betty Lou Harris said. “The six (staff) that are here tonight are exemplary (educators.)”

To be inducted into the wall, the educators are nominated by area residents and fellow staff members for their contributions to the school district and its students.

Suzanne Davidson was one of the educators honored. She was a teacher for 37 years and, according to Carol Churchman who nominated her, every student who passed through her classroom doors entered into a “caring and respectful environment.”

Churchman said Davidson not only taught by leading, but by example.

According to those in attendance, Davidson excelled in one area above others in her career — science.

“You know how they have Bill Nye the Science Guy?,” Churchman said. “We have Suzanne ‘D’ the science diva.”

Churchman said Davidson was responsible for family science night in the district and programs including girls in robotics.

“Her contributions to science are phenomenal,” she said.

Chris Moore said he was privileged to nominate teacher Phyllis Law for the wall and “to call her a friend.”

Law’s career spanned 48 years and, according to Moore, she was known for her dedication and spunk — and a persistent rumor that she was a black belt in karate, a rumor she was not above helping to spread.

“She had enthusiasm for her job,” he said. “She was excited to go to work every day.”

Moore said that in the nearly 50 years Law taught she never allowed herself to become complacent.

“She changed constantly,” he said. “She adapted.”

In addition to teaching, Law coached the crew team at Brooke High School.

“I don’t know about you,” Moore said. “But the last thing I would want to do is take a bunch of teenagers to the river and keep them all from drowning.”

Harris nominated teacher Russell Shaffer herself, though several people thanked the art teacher and professional artist for his years of service.

Shaffer taught in the middle schools and elementary schools for 38 years, where he was known for his kindness and ability to make each student feel special.

“Every student received recognition from him,” Harris said. “Not just the artistic ones.”

Teacher Diane Rasz thanked Shaffer for his compassion. She shared a story of a small dog statute Shaffer gave her teenage daughter in the first grade when their family pet died.

Rasz also was on hand to introduce the former principal of Wellsburg Middle School, Curtis Tarr. Tarr was an educator for 39 years and according to Rasz, he had a knack for being there for his students when they needed him the most.

She wiped away tears as she told how Tarr knew when a student needed a helping hand or a little extra attention.

“This man knew his students,” she said. “We don’t know how but he always did. His students always felt safe and loved. He had passion and compassion for his students.”

Board member Chris Byers had similar stories to share about Tarr.

“He was always the guy that was there for students,” he said. “It’s about time (he was honored.)”

David Walker, a teacher and principal for 35 years, was nominated by Kenneth Hart. Walker, who lives in Florida, was unable to attend the event.

Hart told how Walker was a mentor and a friend to him when he was a young school administrator.

“He had an open-door policy,” he said. “He welcomed me in (at Brooke High School) as part of his team. He led by example, with a policy of long hours and a positive outlook.”

The final inductee of the evening was Perry “The Hawk” West, who served as a teacher and coach at Brooke High School for 37 years and recorded 670 wins as the baseball coach.

Nominated by his son-in-law, Randy Gasaway, West has a scholarship at the school named in his honor that is awarded to two students every year.

Gasaway’s speech was marked by the loss of power several times, something West was quick to make note of.

“I want to thank God for the help,” he joked. “Anyone that has anything bad to say, go ahead. I dare you.”

Gasaway said his father-in-law was important in shaping the lives of many of his students.

“I can see how every one of his athletes learned from him,” he said. “He taught and coached thousands of kids. He showed them how to live.”

West said it’s hard to know the impact you are having on a student.

“I don’t think any of us realize what we mean to other people,” he said.

Superintendent Jeffery Crook said he was honored to take part in his first Wall of Fame induction.

“There is a total of 231 years of teaching here tonight,” he said. “Thank you for all the work and dedication. We love you all.”

Byers said he was moved by the evening.

“It was way more emotionally impactful than I anticipated,” he said.