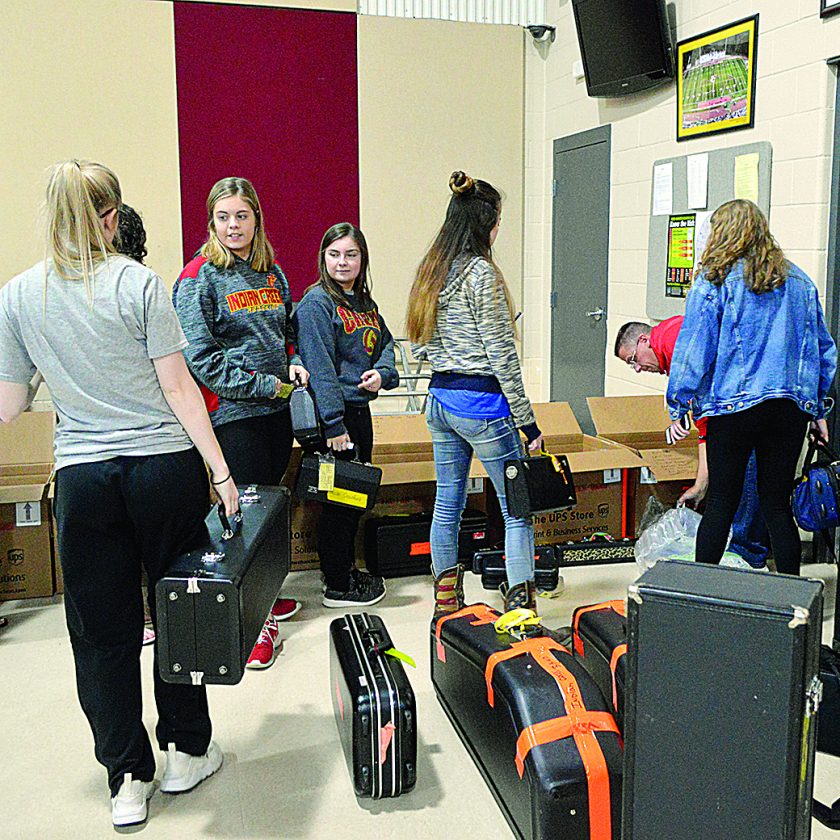 PACKING UP — Members of the Indian Creek High School band Tuesday packed up their instruments for their trip to Hawaii. The trip has been three years in the making. -- Amy Neeley

WINTERSVILLE — Indian Creek High School band director Don Llewellyn says everyone keeps asking him if he is going to enjoy “his vacation.”

Llewellyn, his assistants, 87 band members, parents and siblings, left at 3:30 a.m. today to fly to Hawaii, where they will be staying at the Waikiki Beach Resort. With approximately 190 making the trip, they needed to be split into two groups and take two separate flights. Llewellyn said he split the groups into the “pineapples” and the “papaya.”

“I am very excited and very nervous,” he said about taking so many teenagers and others on the trip.

“I want them to understand the seriousness of (airport security).”

He said this is not just a vacation for the band, either. They will be performing at Pearl Harbor.

The band also will dedicate a wreath to a Wintersville native who died in World War II, Army Pvt. Herbert F. Christian.

Christian was posthumously awarded the Medal of Honor for sacrificing himself by drawing German fire during the advance on Rome in order to allow his patrol to escape an ambush.

The wreath was given to the band by American Legion Post 557.

There will be some down time for the travelers, as well. Llewellyn said the group will be treated to a luau where they will learn about the Polynesian culture and to hula dance. He said they will also spend time at a private island where they can have fun.

“They will be able to paddle board, swim and pick bananas and coconuts right off the tree,” he said.

Llewellyn said the band tries to take a trip every two to three years so that all the members get a chance to attend at least one.

The last one was to Disney World, but because of the cost of this trip, they had to work for three years to make the money needed.

Junior Erin Beegle said it took hard work, but the school gave them lots of opportunities to make the more than $2,000 each needed to attend.

“Some people may have parents that could just pay it, but for the ones that are not that fortunate, they helped us,” she said. “They gave us lots of ways to make the money.”

Beegle said they sold candy, had a drawing for a car among other drawings, bake sales and others fundraisers.

Other students said how happy they were with, what could be, a once-in-a-lifetime trip.

Senior Madison Houser said, “This is a good way to end my senior year.”

“How can you complain?” Llewellyn asked.

The band will be returning May 21. Llewellyn said that once the band returns, he will start planning its next trip.