Groundbreaking held for $1.3B power plant 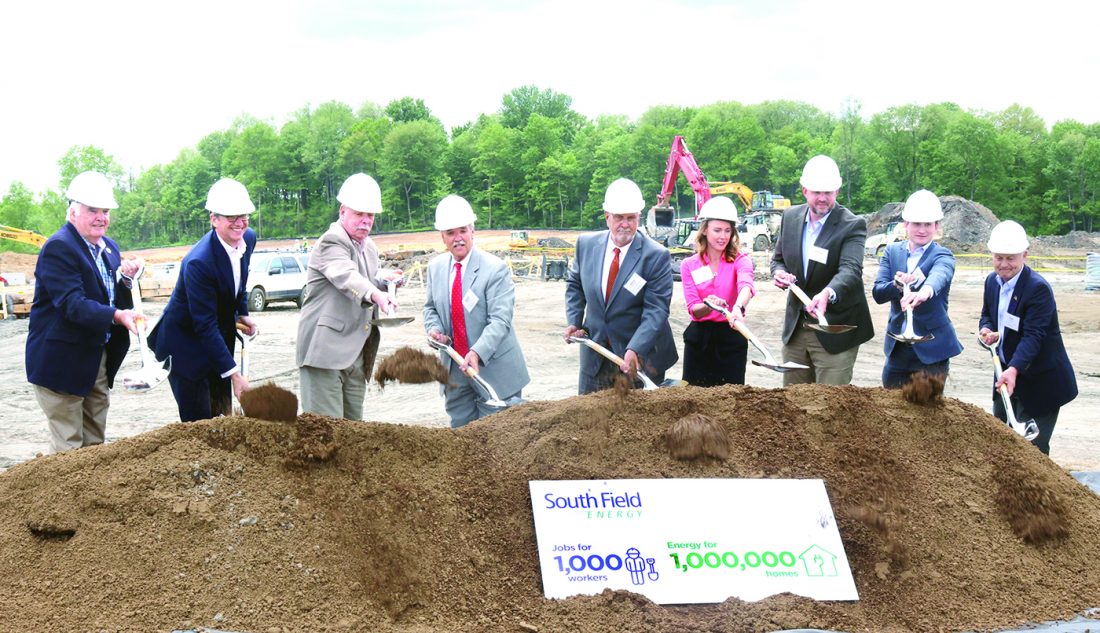 WELLSVILLE — While trucks and heavy equipment moved dirt and building supplies around the construction site that surrounded them, South Field Energy LLC on Wednesday held an official groundbreaking for the $1.3 billion power plant project north of Wellsville.

Collin Brown, manager and development at Advanced Power, talked about the four years it has taken to progress to this point for the South Field Energy plant, a 1,182-megawatt low-carbon combined-cycle natural gas electric generating facility.

Brown and Advance Power CEO Tom Spang discussed working with their neighbors in Columbiana County, listing county officials and those with the two townships, Yellow Creek and Madison, that are around the plant; the Columbiana County Port Authority; the Buckeye Water District; and the Wellsville City School District.

Many of those officials talked about how good it has been to work with those building the South Field project. Columbiana County Commissioner Mike Halleck noted they were kept apprised from the beginning on the plans for the plant. Halleck said he believes the $1.3 billion being spent to build the facility will trickle down to the local economy because much of it is spent here.

School district Superintendent Richard Bereschik offered concrete evidence of some of the ways the project has already benefited Wellsville’s schools. Bereschik talked about how far things had fallen in Wellsville from 1974 to just a few years ago, including a 40 percent drop in the number of students. This led to layoffs and other cuts at the school.

Bereschik said about four years ago he received a call from the prior executive director of the port authority, Tracey Drake, about the possibility of the South Field Energy project. Bereschik said he met with them, but still did not have faith it would happen. The representatives from South Field kept in contact with him and at one point he saw a photo of two of them at a celebration wearing Wellsville Tiger caps on their heads.

With the money South Field Energy has brought to the community, Bereschik said the school district was able to bring back elementary school art; is interviewing for a music teacher position; has hired a full-time psychologist for students; and is planning to put in place a curriculum expert who can also work with gifted students. Additionally, there is now a school resource officer in each of the district’s buildings along with upgraded security.

On Friday, Bereschik said the board will be asked to vote on a contractor for the new synthetic turf field and new track. A new van has been purchased, he added.

Bereschik said 90 percent of what the school district has been able to do is because of money that is being generated by the South Field project.

Following a brief ceremony, officials had a ceremonial groundbreaking for the project. About 1,000 construction jobs will be needed to complete the plant, which will sit on 20 acres of property in the middle of a 150-acre parcel about 3 miles north of Wellsville and near the Buckeye Water District facility. When it is completed, Spang noted, it will require 25 full-time, well-paid engineers to operate the plant.

Advanced Power and its partner, Bechtel, the general contractor for the project, already have built a 700-megawatt natural gas electric generation plant in Carroll County. That plant began operations in December 2017.