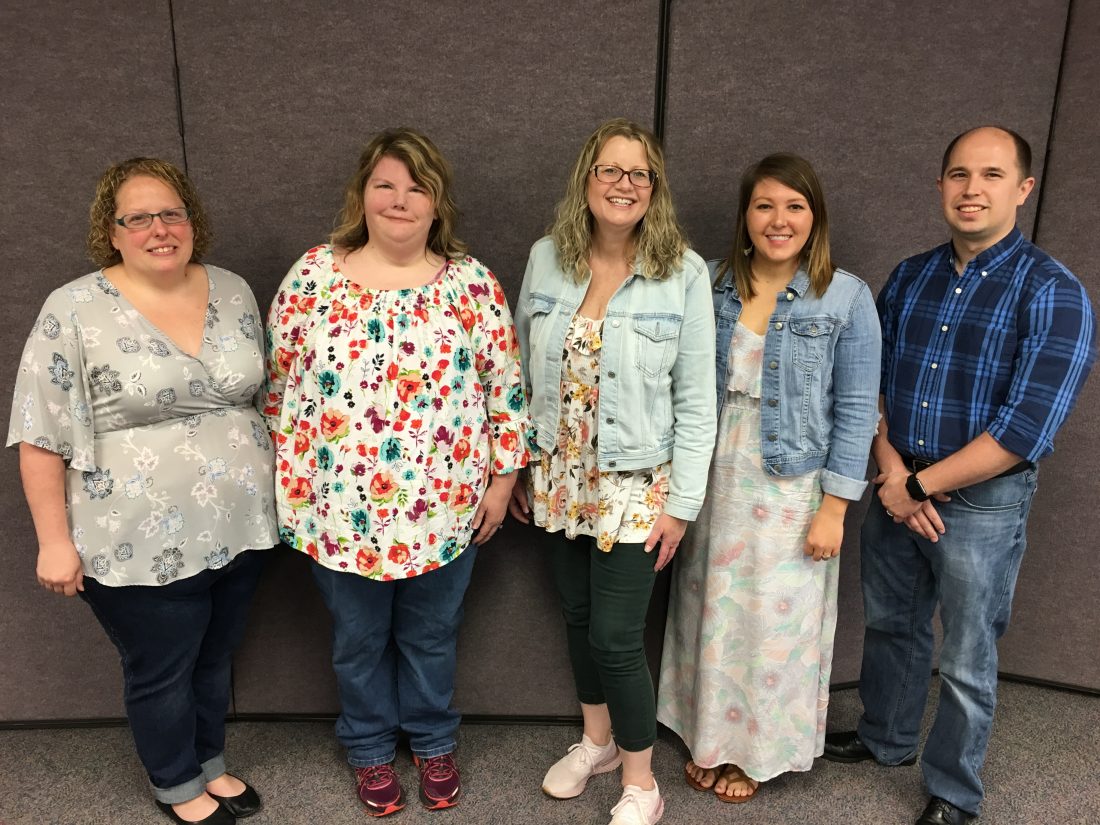 STEPPING UP — May is Foster Care Month in Jefferson County. There are 13 foster homes in the county, serving 14 children. Some of those foster parents include, from left, Amie Cline, Joleen Polk, Brenda Milliken and Molly and Tyler Bayless.

STEUBENVILLE –There is no such thing as a traditional foster parent.

Foster parents come in all ages. Some are single, most work, but they all share the love of children.

May is Foster Parent Month.

The Herald-Star recently sat down with five foster parents to get an insight of the challenges and rewards of being a foster parent.

Molly and Tyler Bayless of Toronto have a 3-year-old biological daughter and now a 1-year-old foster son. They have been foster parents for two years.

Joleen and Eric Polk of Toronto have an 8-month-old foster son. They have been foster parents for a little more than one year.

Amie Cline of Wintersville has a 9-month-old foster daughter. She has been a foster parent for nine months as a single mother.

Brenda Milliken of Steubenville has two biological daughters, ages 29 and 15, and has a pair of siblings, an 11-month-old foster son and a 3-year-old foster daughter. She has been a foster parent since December.

Tyler Bayless said he and his wife saw there was a need for foster parents in the county and wanted to help.

Many foster parents do so with the hope of adopting a foster child or children.

Molly Bayless said they decided to become foster parents, not necessarily to adopt, but because they wanted to help children.

“I thought somebody needs to help,” she said.

Polk said her and her husband couldn’t have children of their own. She has four family members who participated in the foster-adopt program and was inspired by them, adding she and her husband are just fostering now, but would adopt if the situation would present itself.

Cline said she had the ability to be a foster mom.

“I had the ability. I had the love and space. I always wanted a family. I hope to adopt,” she said.

Milliken said she became a foster parent because she believed she wasn’t done being a mother.

“I felt like I still had something to give,” she said.

Molly Bayless said her foster son is her family’s first and only placement, but the couple has plans to adopt him. They brought him home from the hospital after he was born drug dependent.

“The first couple of weeks were really hard. There were a lot of doctor’s appointments and lots of screaming and crying — but that is part of the game,” she said, adding their foster son has surprised doctors in his ability to overcome some of his initial problems.

Polk said she has had her foster son since he was 1 1/2 months old. He is their third foster child, and two of them have been reunited with biological family members.

She said said wasn’t sure how she was going to adapt to being a foster parent.

“I was waiting for it to happen. I went into panic mode when I went to the hospital to get (her first foster child). Seeing all the machinery was scary, but it also was exciting,” she said, adding the child was born with a drug dependency.

The couple had the girl for three months.

“For her to go home, that was really hard. We were prepared and unprepared for it. It was difficult. The whole family got attached to her. We fell in love with the baby. She went home to a good situation, so that made it better,” she said.

Cline said she has had a total of three foster children. She was licensed as a foster parent for less than 24 hours when children services called her into action.

“It was nerve-racking. I didn’t have much information to go on other than the baby needed a home,” she said, adding that child is still with her. Two of the other foster children were with her about a week, adding she was overwhelmed by having three at the same time.

Milliken said she was licensed in December and her foster children came to her on Jan. 2.

She got the call about getting the sibling foster children at eight in the evening.

“Holy cow, I have to go buy diapers. I’m standing at Wal-Mart completely puzzled thinking, ‘what else do I need?’ They came in need of a bath and diapers. They had nothing on them. I guessed their sizes well,” she said.

“I was standing there in the baby aisle wondering what I needed. I was so frantic. I didn’t know what I needed,” she said.

Milliken said she’ll adopt her foster siblings if it becomes an option.

She doesn’t want them to have to transition to another home.

“They already have baggage and then they get more baggage,” she said of the children having to go to another home.

Molly and Tyler Bayless said the biggest reward of being a foster parent is seeing a child grow and change, overcoming medical issues.

Molly said she thought their biological daughter would “push back” at the prospect of having another child in the home.

“Our daughter fell in love with him right away,” she said.

Jolene Polk said the rewards are watching the child grow and change.

“The smiles and laughter and seeing them reach milestones and bond with family –that is the best part,” she said.

Cline said the reward is knowing she is helping a child and giving them a safe, happy place.

“The unknown is challenging, never knowing what is coming at you,” she said.

Milliken said her foster daughter had temper tantrums at the beginning, but her outlook has improved.

“The challenges are the lack of sleep,” she said. “My life was my own (with her youngest daughter being 15-years old). Not so much anymore.”

She said her 15-year-old daughter has adapted to the young children in the home, other than the temper tantrums.

“Some days, she really got overwhelmed,” she said, adding her daughter has really become attached to the younger children. She likes to do “girl things” with them, like doing their hair or picking out clothes, Milliken said,

“If it is in your heart, explore it. Reach out and see what the challenges are and some of the rewards,” he said.

Tyler was knowledgeable about foster parenting, since his parents had a foster child when he was younger. Molly said they rely on both of their parents to help watch the kids.

“They are very willing to help,” she said, adding their parents have treated their foster son the same way as their other grandchildren.

Polk said she gets questioned all the time about the possibility of sending a foster child back home.

“You get attached, and then have to send them home. It is difficult, but it can be done. It hurts and you grieve for a while, but you move on. You have to tell yourself ‘it is for the children.’ I tell people to try (foster parenting). If you have the space in your life, you might want to explore it. Try it. Quite honestly, you can do it,” she said.

“You have to have an amazing support system. When you can see the changes in a child’s life, it is worth it,” she said.

Cline said her three sisters and mother give her great help.

“My foster daughter has been accepted as one of the family,” she said.

Milliken said, “I could be traveling the world right now, but this has brought purpose to my life. What is the purpose of life? It isn’t about pleasing ourselves.”

She said her family has offered great assistance to her, including her ex-husband. She works as a dietitian at Lancia’s Nursing Homes, saying her employer and staff has been very supportive of her.

“It has been good. I have no regrets,” she said.

Joan Dohnal, children services foster care coordinator, said there are 13 foster homes in the county serving 14 children. There are five single mothers serving as a foster parent, she said. Most of the foster parents work, creating a challenge for the care of the children.

Dohnal said the calls about interest in becoming a foster parent has been decreasing. She has had people go through the foster parent training but never made an application for a license.

“Maybe they thought they weren’t ready for it, or realized what all is involved,” she said.

Dohnal said foster parents are expected to work with the biological mother with visitation.

“It is a little more than just taking care of the children,” she said.

Dohnal said as adoptions increase, they fill the foster family home. The agency then has to find new foster parents, she said

Children services reported six adoptions were finalized last year. Five have been finalized so far this year, and seven are pending.

These were are all Jefferson County children, but not all were adopted by Jefferson County foster or adoptive parents, children services reported. Some of them were placed in homes in other counties or into private networks and adopted by their foster parents, the agency said.