Council gets advice on potential market 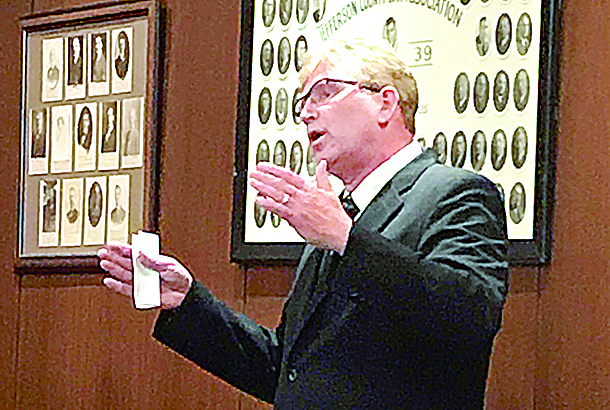 BEEN THERE, DONE THAT — Wheeling Economic Development Specialist Kurt Zende shares his thoughts on a proposal to turn the old city building into a market house. Zende was Steubenville’s Main Street director in 1988. -- Linda Harris

STEUBENVILLE — A Wheeling economic development specialist told members of City Council Tuesday he likes their idea of turning the old city building into a market house.

Kurt Zende, architect of Wheeling’s highly successful Centre Market, said the keys to making something similar work in Steubenville are to choose an anchor that people will want to come to, cluster like businesses and make sure tenants are adequately monetized.

“Make it a destination and an area they’re coming to, not just a restaurant,” said Zende, a Steubenville native, told council during an economic development committee meeting. “And anything you can do to make it look safe … the fort is beautiful, the new city building is beautiful.”

Zende said there were a lot of empty storefronts in the Centre Market area when Wheeling started. He said he made it a point to help fill outlying spaces as well as in-market ones.

“I’d have been an idiot not to help all the businesses around us,” he said. “They generate foot traffic.”

Zende figures around 600,000 people a year go through the market area, pointing out Wheeling was fortunate to have Coleman’s Fish Market already located in the market for more than a century.

“I would say it needs to be something like that for you, create a destination that people will come to. I think that is the anchor that drives everything else.”

Zende said Wheeling owns Centre Market, which operates as a non-profit. As part of the lease agreement, the city picks up the tab for lights, heat and air conditioning. He urged council to “give incentives you can afford” to bring tenants in, and not to scrimp on marketing, including using social media.

“There’s a lot of work to do before we get to that point,” said 6th Ward Councilman Bob Villamagna, pointing out the city is still waiting for an asbestos abatement report. “But there has been interest.”

Zende said they haven’t always picked the right vendors to bring in, but that the city has found a successful formula.

“There’s really no magic to it,” he said.

“Fortunately, we have good foot traffic. It took a while to get where we are. We made mistakes, people weren’t always selling the right things.”

In other business, City Manager Jim Mavromatis said volunteers are being trained in the proper way to prepare a ballfield.

The possibility had been raised by youth league leaders at the May 6 park board meeting, but Mavromatis had refused to commit until he’d spoken with union leaders.

“Volunteers are being accepted as long as they are properly trained,” he said.

The city’s park board had come under fire for not having all the ballfields in playable condition, but Director Lori Featherolf and Mavromatis had pointed out the city has neither the manpower nor the budget to maintain 14 parks and playgrounds. Excessive rain compounded the problems, they said.

Last year several groups had volunteered to maintain three tot lots themselves in order to keep them open, but Featherolf said after getting off to an enthusiastic start the volunteer effort tapered off.

This year, she said, “either the community jumps in and helps us or we’re just going to have to close them.”

Councilwoman at large Kimberly Hahn got the go-ahead from council to proceed with plans for Paddlefest, a river outing for kayakers and canoeists.

Hahn said she’d consulted Coast Guard officials, who saw no problem with the river being used for Paddlefest. Local businessman Mark Nelson volunteered to monitor participants from his boat, while the U.S. Army Corps of Engineers’ new River Rangers program will be on hand to offer tips for boating on the river and check life preservers and registration numbers.

Law Director Costa Mastros is preparing a liability waiver all participants must sign.

“I think we’ve (taken) every step we can to make sure the city (is protected) from a liability standpoint,” Mavromatis added.

Council passed emergency legislation authorizing Mavromatis to enter into contract with the “lowest and most qualified bidder” for repairs to the John Scott connector.

The outer lane from U.S. Route 22 going toward Sunset Boulevard was closed two weeks ago after city officials discovered a void under the roadway.

“My fear is once we peel back the onion, what we’re going to see,” Mavromatis said.

“I hope we can finally bring an end to this, once and for all,” he said.

Fifth Ward Councilman Willie Paul introduced proposed changes to the city’s table of organization that would make room for two part-time workers to assist the parks department over the summer.