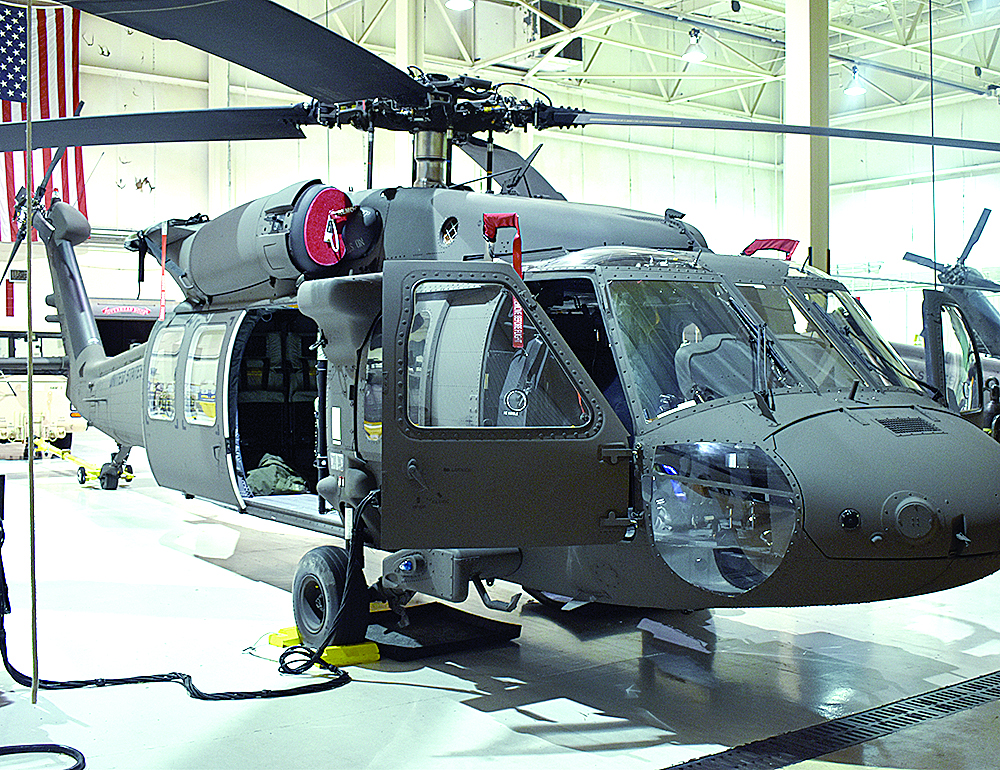 ADDITION — A Sikorsky UH-60M Black Hawk helicopter sits in the hanger at the Army Aviation Support Facility in Wheeling. The Black Hawks will be flown by pilots from the 1st Battalion, 150th Aviation Regiment. -- John McCabe

WHEELING — For the past 34 years, every mission completed by the aviators at Company C, 1st Battalion, 150th Aviation Regiment based in Wheeling was done in an older-model, hand-me-down military helicopter — first the Bell UH-1 “Huey” and, starting in 2002, Sikorsky’s UH-60A/L Black Hawk.

The National Guard’s role has changed significantly since the mid-1980s, however, and so has its equipment needs.

The 150th has deployed overseas twice since Sept. 11, 2001 — first to Iraq in 2005 and then to Bosnia/Kosovo in 2010-11 — with the unit continually receiving high praise for its efforts in supporting troops in combat theaters.

It also continues to serve West Virginians in times of need — most recently, at least on a larger scale, in the 2016 flooding that devastated many areas of the state.

On Friday, state National Guard officials unveiled the latest tool in the battalion’s arsenal — the UH-60M Black Hawk, known as the “Mike.” The unit’s nine new Black Hawks will be based in Wheeling at the Guard’s Army Aviation Support Facility, where the 150th is located.

For longtime battalion members such as Maj. Fred Nicely, the new helicopter is a welcome sight.

Nicely, a St. Clairsville resident, came to the region in the 1980s with his family, as his father served as one of the founding members of the 150th in West Virginia. He joined the guard prior to his father’s retirement, and for the past 20 years has been flying the older-model equipment.

As a pilot, he said stepping into the cockpit of the new Black Hawk models is like “being a kid on Christmas morning.”

“Think of it this way: The Black Hawks we had were analog, like your old car radio with a couple dials. Now we’re all push-button,” he said. “It’s a really nice feeling to sit in something brand-spanking new.”

The helicopter’s technology — the cockpit of the new Black Hawks, with its touch-screens, has a video-game feel — will allow the 150th to better serve its dual role as the state’s domestic response force and also the U.S. Army’s support group for infantry troops during times of war, Nicely said.

“These new Black Hawks will allow that transition to be much easier for us,” he said.

Residents of Brooke and Ohio counties should get used to seeing the new Black Hawks in the air, as the Wheeling battalion supports 1,200 flight hours a month. Each pilot is required to fly a minimum of 96 hours per year, and Guard officials said Friday it takes about 100 hours of flight time for pilots to fully transition from the old Black Hawks to the new model.

The new Black Hawks weigh about 15,000 pounds, and come in with a full equipment load and fuel at about 23,500 pounds.

At the state level, the “Mike” Black Hawk model offers better emergency response, the ability to get emergency personnel into areas unable to be reached by vehicles, and, most importantly, the ability for the 150th to join the Statewide Interoperable Radio Network.

Currently, between the air wing in Wheeling, another in Williamstown and a third in Bridgeport, W.Va., the Guard can have soldiers and their equipment anywhere in West Virginia within two hours to help deal with an emergency situation.

Rae also noted the West Virginia Air National Guard has had the top scorecard among units in all 50 states three times in the past eight quarters — a feat that’s worth bragging about, he said.

“To be No. 1 on the scorecard says a heck of a lot about the soldiers of our organization,” added Maj. Evan Dale, facility commander in Wheeling.

Dale touted the new Black Hawk’s capabilities, noting it is more powerful with an upgraded engine, has wider rotor blades that produce more lift and a more comfortable ride for the aviators.

“You don’t feel as much vibration as you did in the older models,” he said.

The added power and lift also will benefit pilots during overseas deployments — particularly in areas such as Afghanistan where every little bit makes a difference for pilots flying combat or support missions, Dale said.

A jaunt in the new Black Hawks over Wheeling proved his point, as the UH-60M is more comfortable and has a smoother ride than many modern vehicles. The crew took a 20-minute trip that went from the airport to Wheeling Island and back.

The easy ride did not surprise Nicely, who noted the 150th’s aviators are top-notch.

“Most all of our folks are from right here in the valley, with some from Pittsburgh. … All of them are the most highly qualified folks you can find,” he said. “Add in the modernized aircraft, and that just makes it that much better.”