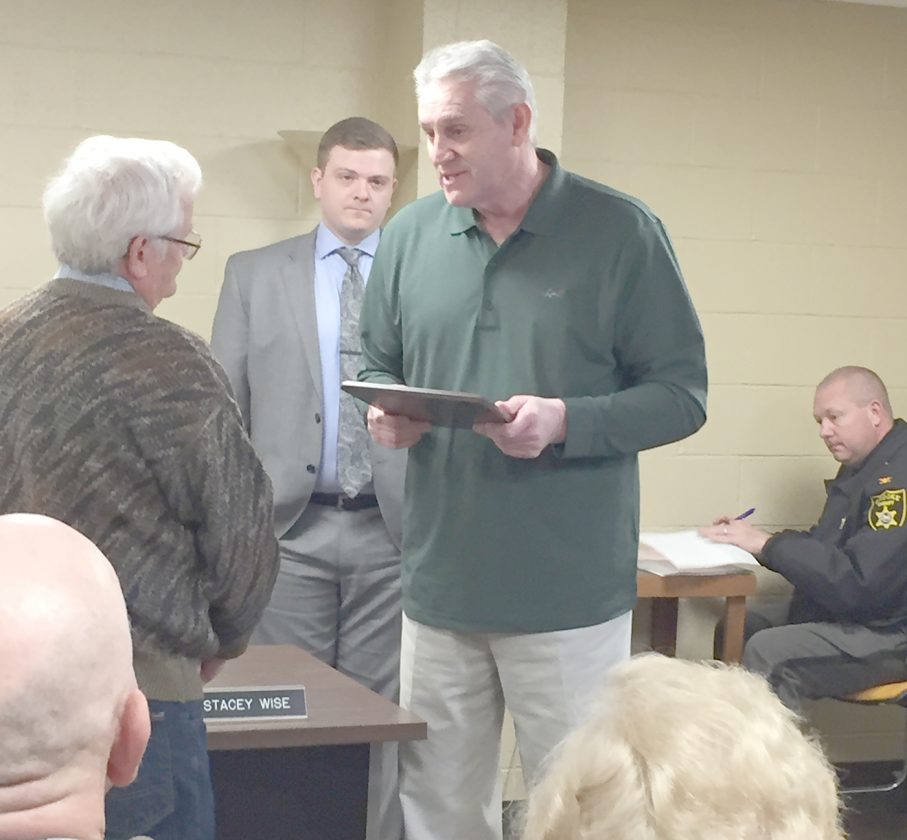 WELLSBURG — The Brooke County Commissioners thanked Bill Long for his heroism during a structure fire.

Long helped his 99-year-old neighbor escape from a burning building around 9 a.m. on Jan. 4.

“I went out on the porch and saw what was happening,” said Long. “I knew it was a fire and I knew the lady who lived there was 99 years old. I just took off running to get her out.”

Long has been retired from the McKinleyville Volunteer Fire Department for roughly 20 years.

At the March 26 commissioner’s meeting, Commissioner Tim Ennis said the heroic act was not out of character for Long.

“Anyone in this room who knows you knows ‘that’s Bill Long,'” noted Ennis.

Long was honored with a plaque at the commissioner’s meeting, thanking him for his courage, personal initiative and assistance that directly resulted in saving the life of neighbor Ruth Boggs.

Long said he has known Boggs since the 1960s.

“It would break my heart if something happened to her,” he said.

Pastor Brian Knight of the Wellsburg Church of the Nazarene said Long and his wife of 46 years, Florence, are active members in the community and church.

Knight noted that Long has been a member of the church since before Knight became the pastor about three years ago, and that he has deep roots within the community.

“Long was born and raised in Brooke County,” said Knight. “I’ve been on kayaking trips with him and 18 to 20 other people that he invited, going down the Buffalo River. It seems like everyone knows him.”

Knight added that Long is “a fantastic guy.”

“I’m not at all surprised at all he went in to save his neighbor, or her dog,” said Knight.