Demjan honored for efforts to help the elderly and veterans 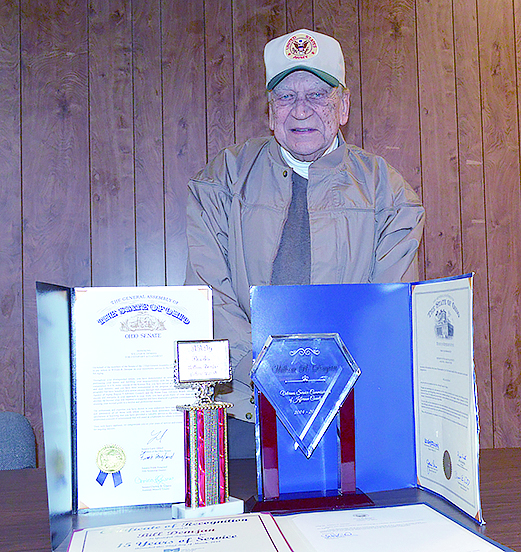 HONORED — Bill Demjan has been an advocate for senior citizens and veterans living in the Ohio Valley. He has been recognized for his hard work, receiving special recognition from the Ohio General Assembly for “Honoring Exemplary Attainment” and “Distinct Honor of Serving for 15 Years.” -- Amy Neeley

STEUBENVILLE — Bill Demjan is an Army veteran who served stateside during the Korean War and continues to serve — he spent two terms as a member of the Ohio Advisory Council on Aging and was a commissioner with the Jefferson County Veterans Service Commission.

Demjan refers to himself is an advocate for two populations he feels are sometimes overlooked — the veterans and the elderly.

“When I retired I was looking for something,” Demjan said. “There was great satisfaction in working with the veterans and aging.”

Demjan was appointed to the advisory council of the aging agency twice, once by Gov. Ted Strickland and once by Gov. John Kasich.

“It was an honor because one was a Democrat and one was a Republican,” Demjan said.

Demjan recently was acknowledged for his work and dedication.

The Ohio General Assembly issued resolutions honoring Demjan. He received one resolution “Honoring Exemplary Attainment” and the other for the “Distinct Honor of Serving for 15 Years.”

He also received a personal letter thanking him for the work he has done.

The Veterans Service Commission of Jefferson County presented Demjan with an award for his years of service between 2004 – 2019.

“It’s a distinct honor helping the veterans in every situation — food, shelter and clothing,” he said. “We can’t do enough for them.”