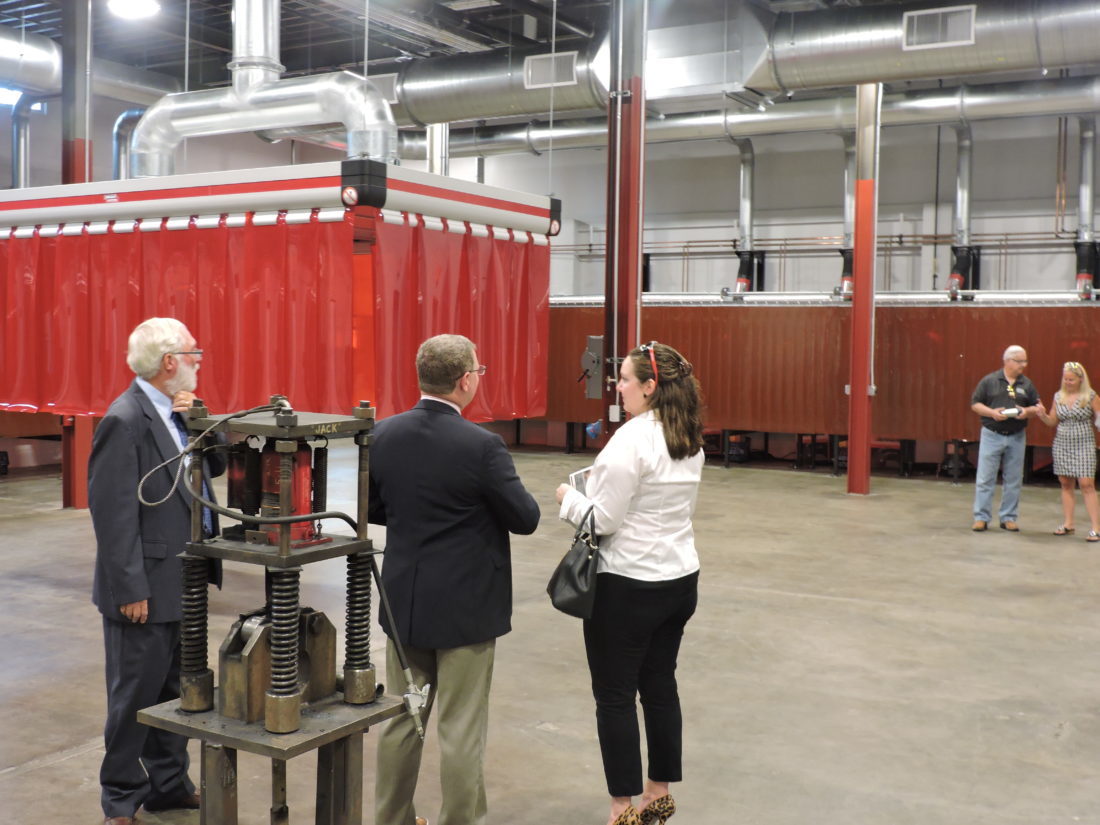 WHEELING — At a loss for a pair of giant scissors to cut a sheet of steel that symbolized a ribbon, officials at West Virginia Northern Community College used what they had on hand to commemorate the opening of their new technology center — a welding torch.

“This gives us a facility to train students with the high skills they need for the jobs in high demand occupations, particularly in the oil and gas industry,” Koon said. “These are high-demand jobs, and now we have the capability to help our students get these jobs.”

Koon said the building, formerly used for distribution by the Westinghouse Electric Co. before being closed, was being used to train for skilled labor in the area. He said the college had seen a need for it in the Ohio Valley.

“As we talked to industry people up and down the valley, there’s a great shortage of people who have the qualified skills they need for industrial jobs,” he said.

“There’s been changes in the demographics and education up and down the valley. If we can get more students, this will help to fill those needs.”

Koon said the welding lab can hold 20 students, but with multiple classes, the college is not likely to hit its limit anytime soon. He said it’s a similar situation for the petroleum technology.

“This building represents, from Northern’s perspective, an investment in the future,” said Larry Tackett, vice president of economic and workplace development. “Community colleges by their nature react to the needs of communities, providing training, providing education. The investment we’ve made in this building is going beyond what we’d normally do, in that we’re looking three, four, five years in the future, representing our two programs.”

The petroleum technology class, Tackett said, would focus on the oil and gas field at the midstream level. After gas is extracted, it goes to the midstream processing plants.

“They get a broad range of exposure to all the technologies involved at those levels,” he said.

Welding instructional specialist Brandy Killeen, who cut the steel ribbon, was a former graduate of Northern’s program. He said he can’t wait for classes to begin in the new center, which was a sentiment mirrored by upcoming students.

“It’s so exciting, because we’ll have more opportunities to learn more and do more here,” she said. “We’ll get more hands-on experiences here, as opposed to the smaller, more confined area we had before where we weren’t able to do as much. … The students are so excited. They’ve already been asking me for the tour and everything. They’re really excited to start.”

The $4.7 million construction project was said to have come in under budget by an unspecified amount, according to Chief Financial Officer Jeff Sayre.

Colaianni Construction of Dillonvale served as the primary contractor for the project, while M&G Architects and Engineers of Wheeling designed the building. Design began around 18 months ago, while construction began around nine months ago.