Kavanaugh is Trump’s nominee for court 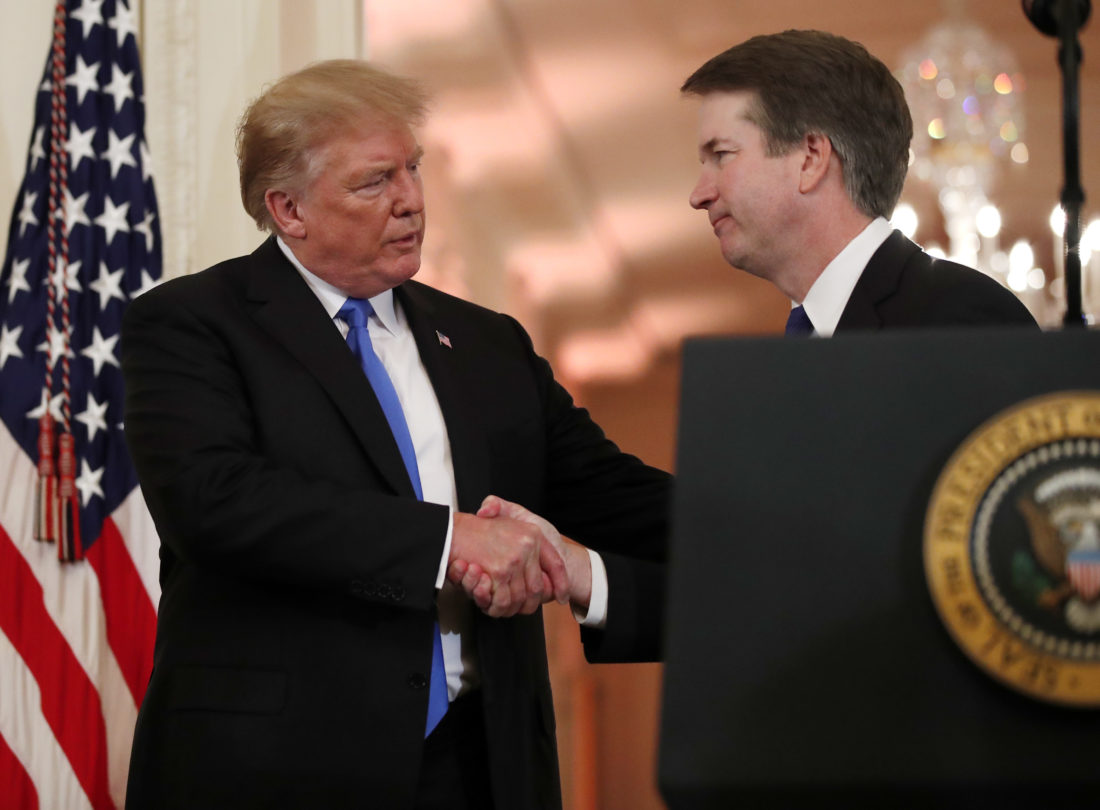 WASHINGTON — President Donald Trump chose Brett Kavanaugh, a solidly conservative, politically connected judge, for the Supreme Court, setting up a ferocious confirmation battle with Democrats as he seeks to shift the nation’s highest court ever further to the right.

A favorite of the Republican legal establishment in Washington, Kavanaugh, 53, is a former law clerk for retiring Justice Anthony Kennedy. Like Trump’s first nominee last year, Justice Neil Gorsuch, Kavanaugh would be a young addition who could help remake the court for decades to come with rulings that could restrict abortion, expand gun rights and roll back key parts of Obamacare.

“He is a brilliant jurist, with a clear and effective writing style, universally regarded as one of the finest and sharpest legal minds of our time,” Trump said in his prime-time televised White House announcement Monday. He added: “There is no one in America more qualified for this position, and no one more deserving.”

With Kavanaugh, Trump is replacing a swing vote on the nine-member court with a staunch conservative. Kavanaugh, who serves on the Court of Appeals for the D.C. Circuit, is expected to be less receptive to abortion and gay rights than Kennedy was. He also has taken an expansive view of executive power and has favored limits on investigating the president.

On Monday, Trump phoned retiring Justice Kennedy to inform him that his former law clerk would be nominated to fill his seat. Trump signed Kavanaugh’s nomination papers Monday evening in the White House residence.

Some conservatives have expressed concerns about Kavanaugh, questioning his commitment to social issues like abortion and noting his time serving under President George W. Bush as evidence he is a more establishment choice. But his supporters have cited his experience and wide range of legal opinions.

With Democrats determined to vigorously oppose Trump’s choice, the Senate confirmation battle is expected to dominate the months leading up to November’s midterm elections. Senate Republicans hold only a 51-49 majority, leaving them hardly any margin if Democrats hold the line. Democratic senators running for re-election in states Trump carried in 2016 will face pressure to back his nominee.

Senate Majority Leader Mitch McConnell called Kavanaugh “a superb choice” and said senators would start meeting with him this week.

Some Republican senators had favored other options. Rand Paul of Kentucky had expressed concerns but tweeted that he looked forward to meeting with Kavanaugh “with an open mind.”

Democrats and liberal advocacy groups quickly lined up in opposition.

Signaling the fight ahead on abortion rights, Dawn Laguens, executive vice president of Planned Parenthood Federation of America, said in a statement: “There’s no way to sugarcoat it: With this nomination, the constitutional right to access safe, legal abortion in this country is on the line.

The White House invited a number of senators to attend the Monday night announcement. Democrats who were invited but declined included Sens. Joe Donnelly of Indiana, Heidi Heitkamp of North Dakota, Doug Jones of Alabama, Joe Manchin of West Virginia and Dianne Feinstein of California. Feinstein is the ranking Democrat on the Judiciary Committee. The others are Republican targets for the confirmation vote who come from Trump-won states where they face re-election this fall.

Democrats have turned their attention to pressuring two Republicans, Sens. Susan Collins of Maine and Lisa Murkowski of Alaska, to oppose any nominee who threatens Roe v. Wade.