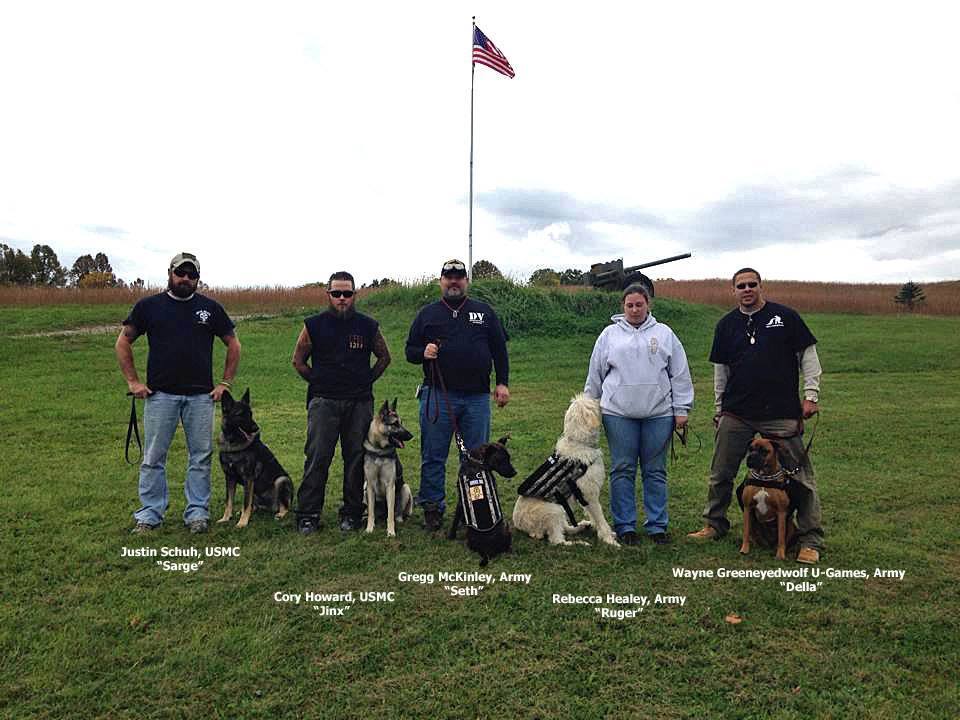 SUCCESSFUL MATCHES — The Dogs 4 Warriors program works with the prison system in Belmont County to provide trained service dogs to veterans across the country. Some of the successful placements, from left, include Justin Schuh, Marine Corps, with Sarge; Cory Howard, Marine, with Jinx; Gregg McKinley, Army, with Seth; Rebecca Healey, Army, with Ruger; and Wayne Greeneyedwolf U-Games, Army, with Della. - contributed

FLUSHING — Veterans are being matched with service dogs to provide companionship and to help them deal with the struggles they face upon returning home, thanks to the Dogs 4 Warriors program of Flushing and Belmont Correctional Institution.

Sheila Slezak, CEO of Dogs 4 Warriors, said organizers are grateful for the prison’s cooperation with the program. Inmates work to train the dogs, which she said has allowed the program to progress faster and to a greater degree. She has trained dogs for more than 30 years and said the needs of veterans hit close to home for her.

“My husband’s a veteran. My father’s a veteran. A lot of my friends are veterans. I’ve trained service dogs for a few of our veteran friends, and when we found out how much they were charging these guys for a dog, I thought, ‘All I do is train, so why not do this?'”

Slezak said there has been no shortage of requests for the dogs.

“I thought it would be a snowball effect. It was an avalanche effect,” she said. “There is always a veteran here, 365 days a year there’s always someone here, whether they have a dog or are getting a dog. In three years, we’ve placed 77 trained dogs with their veterans.”

The dogs have found homes and companions across the country.

Certain dog breeds are strongly associated with the program. It provides about 95 percent German shepherds, with the other popular choices being Golden and Labrador retrievers.

Slezak said the cooperation with the prison began three years ago, when the inmates in the prison’s veteran’s dorm heard of the program and asked their unit supervisor if they could help. Slezak said the inmates’ assistance has progressed from basic raising of the dogs to more advanced training.

“We go down at least once a week, and we have classes, and they have classes every day. These guys have progressed from housebreaking and watching them to they’re helpful enough to put out as many dogs as we do,” she said.

She said the dogs learn a variety of skills, including turning lights on and retrieving named items. She pointed out the high standards for the training and all that the dogs will be needed to do for their companions.

“These dogs do everything from calm the veterans’ anxiety to waking them up from nightmares. They go get named items for them; it could be their iPad, it could be their phone, it could be their medication. We have some guys that are in wheelchairs,” she said. The dogs are “taught to go get a wheelchair. It helps (the veterans) go out in public. I’ve had guys that were living as hermits — that had tried multiple times to commit suicide that haven’t tried to commit suicide in the last three years. This gives them a new outlook on their life and a new opportunity to participate in their families’ daily activities, community events, social clubs, the American Legion.”

The dogs are trained at the prison and further specialized to match their veterans’ needs.

Veterans stay at the Dogs 4 Warrior’s site for two weeks to be trained with their dogs. This also includes getting the dogs accustomed to public spaces and interaction with people.

“If you can get them into these areas and they’re comfortable, then when they go back home and they live in a higher-populated area, it’s not so hard for them to go places with their family,” Slezak said.

She added she has seen benefits among the inmates who serve as handlers.

“They learn to be responsible. They do have a skill when they’re done — they can go out and train dogs — because it is excruciatingly hard for someone who’s a felon … to find work if they want to,” she said. “They are responsible for the dog — responsible for its grooming, responsible for its feeding. They have a standard they have to uphold. They’re not just babysitting the dog.”

She said being trained in the prison also helps the dogs in other ways.

“It gets the dogs used to a crowded environment. It helps them with waiting in long lines.”

Slezak also commended the prison and the inmates who work with the program.

“They’ve been a lot of help. If it wasn’t for them, we couldn’t have put out as many dogs as we have,” she said.

The program is free for veterans. Slezak added the support and volunteerism of all involved has made the program possible.

For information or to sponsor or donate a dog, visit dogs4warriors.org. 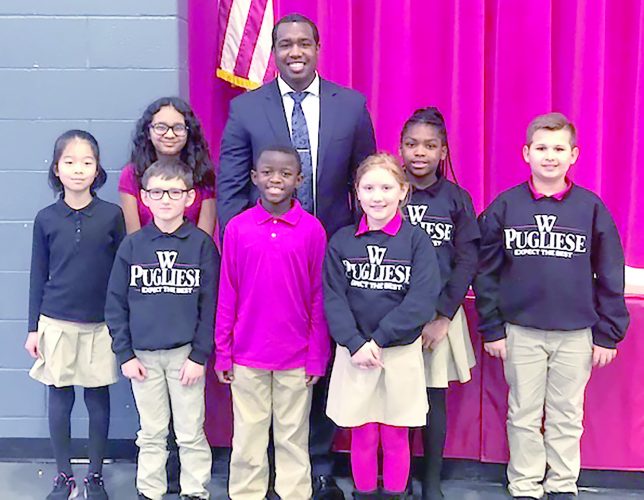