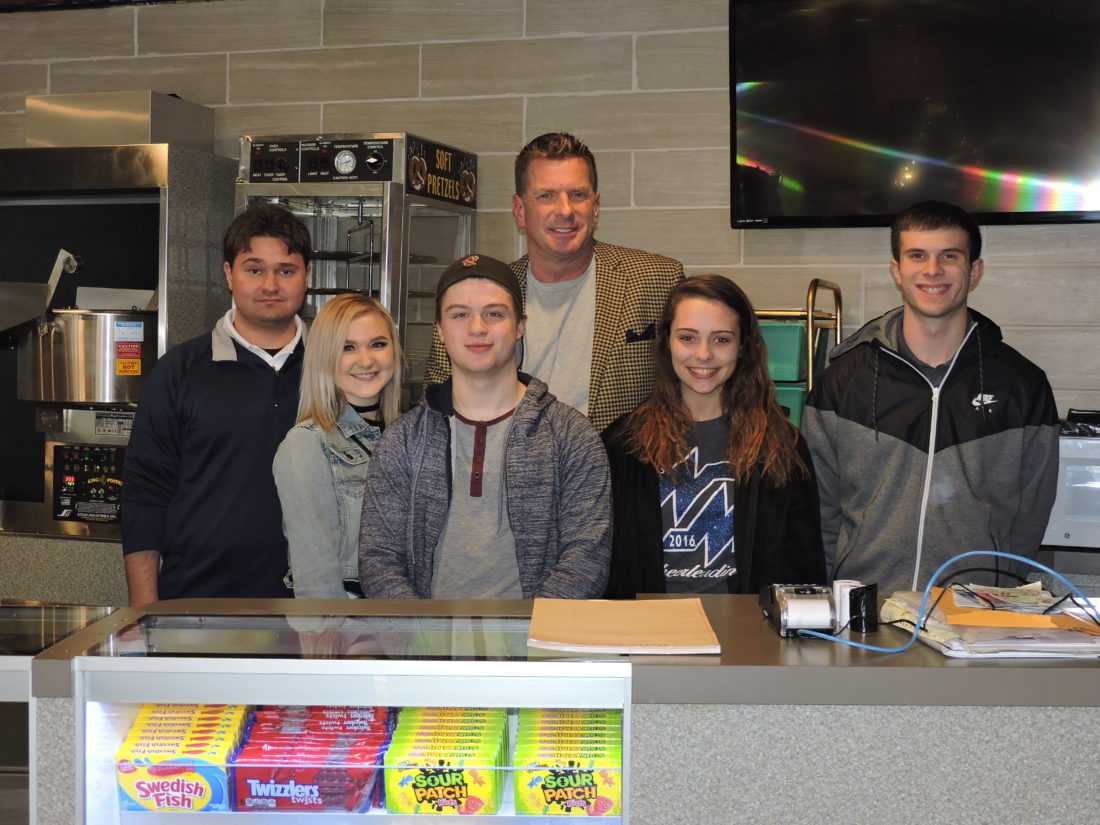 GETTING READY — Weirton’s Plaza Theatre is set to re-open Friday after a lengthy renovation by new owner Douglas Jackson. With Jackson, in back, are some of the local movie theater’s employees, from left, Al Bernardi, Gabi Soplinski, Dom Soplinski, Hannah Delval and Jimmy Mazzone. - Craig Howell

WEIRTON — After more than two years, Weirton’s Plaza Theatre is set to reopen.

According to owner Douglas Jackson, the movie theater located at 412 Penco Road will be open for business Friday, just in time for the premiere of Disney’s new live action version of “Beauty and the Beast.”

It has been a lengthy process, but Jackson believes it has been worth it to bring an up-to-date movie experience to area residents.

“Everything in here is brand new, including the bathrooms,” Jackson said.

The renovations have included new walls, floors and lighting, as well as the installation of 200 new seats, 26 Dolby surround sound speakers and a new high definition movie screen.

Jackson purchased the movie theater, which has been a part of the Weirton community for more than 45 years, shortly after it closed in December 2014.

“I never set out to open a movie theater, but I felt the community deserved it,” Jackson said, adding he didn’t want local youth to have to drive to Pittsburgh to watch a movie. “I wanted to keep them safe in our own community.”

The single-screen theater is working with distributors to bring in movies as they are released, with Jackson explaining they already have bookings through August.

“We will be showing all first-run movies, which means all the latest box-office hits,” he explained.

One element of the reopening Jackson pointed out is the staff.

“They’re all juniors and seniors from local high schools,” Jackson explained, noting he is establishing a scholarship program for the teens.

As part of the program, the nine students will work at the movie theater while planning to attend college and remain on their school’s honor roll. Upon acceptance to college, Jackson will present them with a cash scholarship.

Jackson said he believes the jobs will provide the students with a variety of skills, such as marketing, keeping inventory, cash management and computer programming, as well as opportunities to work with the movie studios.

“They are not just coming here to sell popcorn,” he said.

In keeping with a community feel, Jackson said he plans to keep ticket prices lower than many corporate owned movie theaters.

Another benefit for the movie theater, and the community, Jackson said, is the number of quality restaurants in the area. He said it makes it perfect for people who want to go out for something to eat and then see a movie.

“I believe in the entire dinner-and-movie concept,” Jackson said.

Friday’s opening will include a Business After Hours with the Weirton Area Chamber of Commerce at 4:30 p.m., followed by the first screening of “Beauty and the Beast” at 6:45 p.m.

For information, contact the Plaza Theatre at (304) 224-1518, or go online at www.weirtonplazatheatre.com.

(Howell can be contacted at chowell@weirtondailytimes.com, and followed via Twitter @CHowellWDT.)