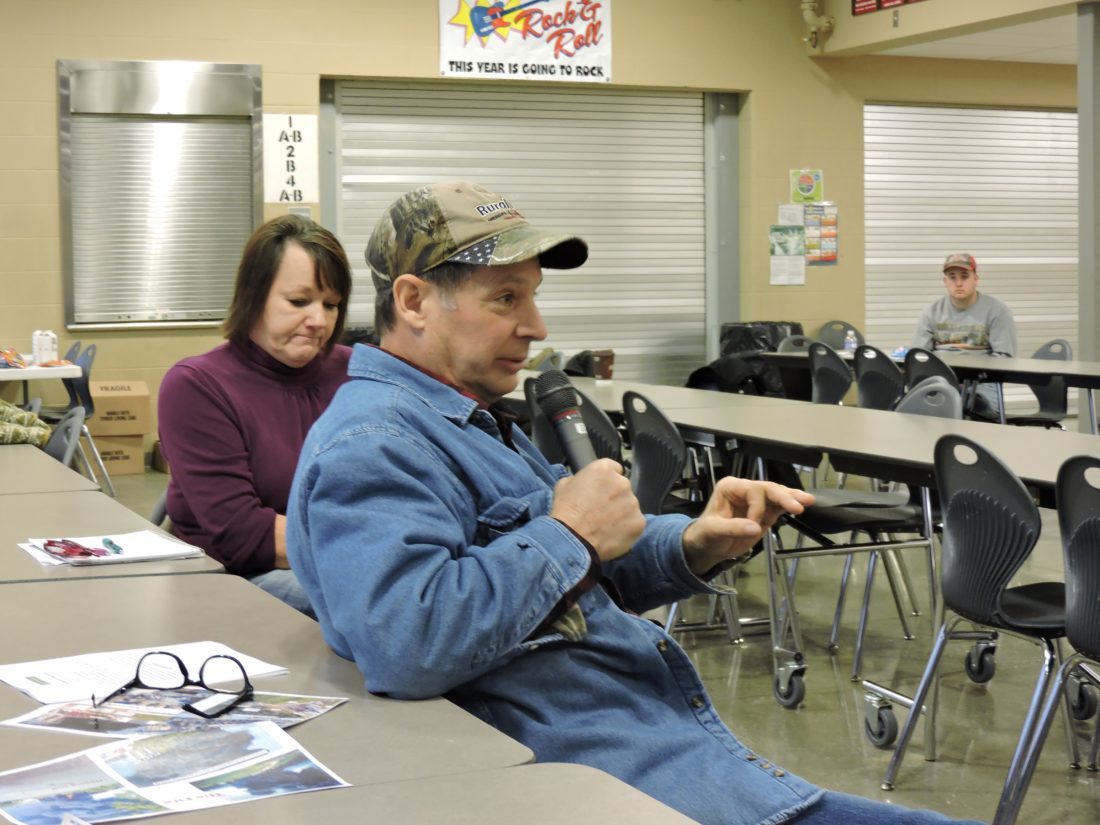 SPEAKING OUT — Noble County residents Sandra and Joe Perebzak claimed they have been adversely affected by the oil and gas industry. A community listening session was held Saturday at River High School. (Janell Hunter)

The event was facilitated by Melanie Houston of the Ohio Environmental Council.

Julie Weatherington-Rice, senior scientist at Bennett & Williams Environmental Consultants, gave a presentation about the environmental impact of the June 2014 explosion and fire at the Statoil Eisenbarth well pad in Monroe County.

She said the fire burned for five days, and the chemicals and materials that burned were a “real toxic brew.” As a result, more than 70,000 fish and other aquatic life were killed from Opossum Creek to the Ohio River.

“I want to know what happened to the smoke. Not one agency followed the smoke. These are life-threatening exposure levels,” Weatherington-Rice said.

Weatherington-Rice said communication was either poor or nonexistent between the Ohio Environmental Protection Agency and the U.S. EPA, and that 14 fire departments and two emergency management departments were dispatched to the scene.

The U.S. EPA and Ohio EPA didn’t receive a list of the chemicals involved in the fire until five days after the explosion, it was noted.

She said Opossum Creek spills into the Ohio River 1.7 miles away from a public water intake for New Martinsville, and that city was not notified.

The smoke became a low-lying fog in the higher elevations, and Monroe County resident Rebecca Bowen claims she and her family were adversely affected by it. She said her family never had any health issues until after the smoke rolled through.

“… Right after the fire it seems like things began to change. The morning after the fire, the smell was so bad. It smelled like chlorine bleach and burnt plastic. It had a sweet smell. The smoke had left a black film all over everything,” Bowen said.

Bowen said the next day, her family was sick with sore throats, vomiting and headaches. She said they all suffer with breathing problems, migraines and indigestion. She said she and her family have received no help from government or oil and gas officials.

“I really want to know how people have been impacted by this, because if we’re going to do something meaningful, we need to get it organized in the right way,” Weatherington-Rice said.

Monroe County resident Marjorie Baumberger said she was not directly affected by the Statoil Eisenbarth fire, but she is concerned about the overall environmental footprint of the oil and gas industry in the area. She said she lives on a farm that has been in her family since 1846 and would like to make sure the soil remains non-toxic.

“At least 10 companies are buying out all the farmers, and we are left with all this construction. … We tend to get taken advantage of,” Baumberger said.

Hoagland sympathized with those having health problems. He also acknowledged the benefits of the industry in providing jobs.

“We want to make sure that safety is paramount … but we want upward mobility. … Instead of us being called the Rust Belt, let’s go back to work, create jobs and make something happen.”

“StatOil did have a fine, and $100,000 of that fine went to our firefighters for training. … Having the water tested for a baseline is important. It’s all about facts,” Schumacher said. “We don’t want to skew the information, but use documented facts. We want to make sure we do the right thing here. …

“The fish kill was terrible, but it is fortunate we didn’t lose any human life,” he continued. “It was a terrible event and I think everybody here has a story to tell. We want to make sure that where we move forward from here, that it is appropriate and that everybody is safe.”