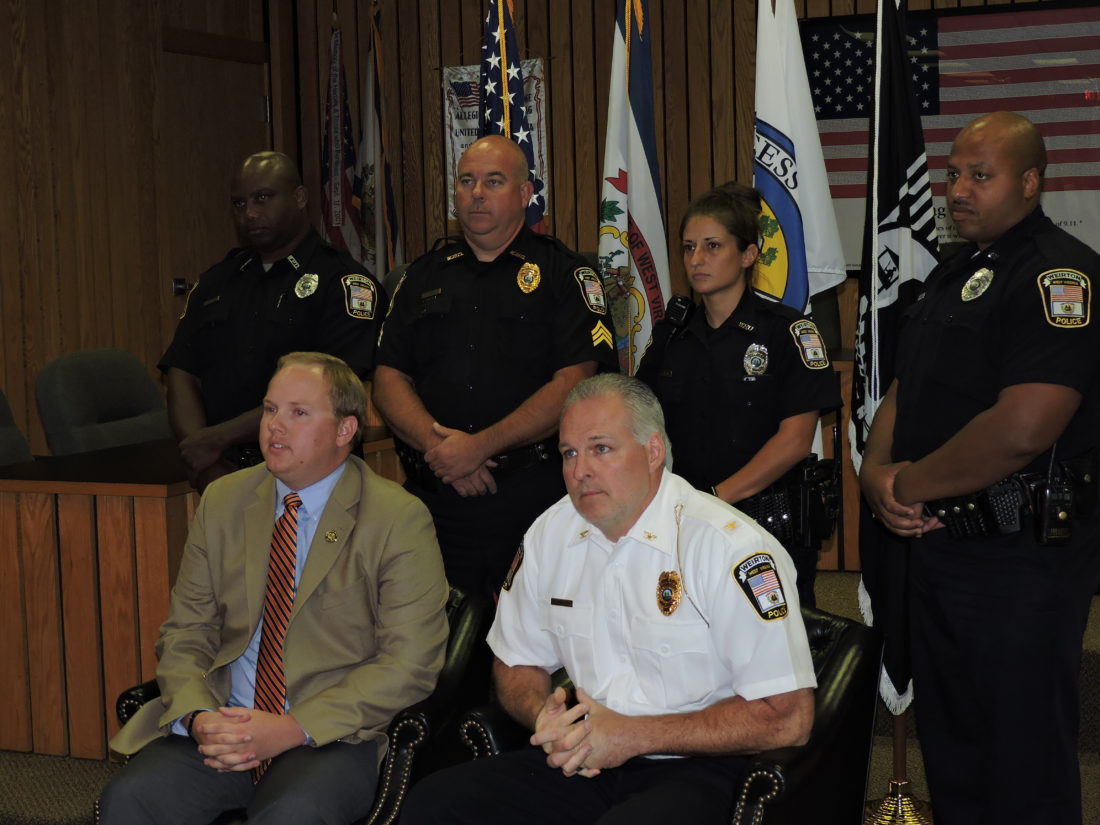 POLICE DISCUSSION — Weirton officials on Tuesday responded to a recent news report in which a former city police officer claimed he was terminated in connection to a May officer-involved shooting in the city. Officials say the former officer was terminated for conduct unbecoming an officer following a series of incidents. Taking part in a press conference at the Weirton Municipal Building were, front, from left, City Manager Travis Blosser and Police Chief Rob Alexander; and back, Detective Gerard Spencer, Sgt. Brian Beatty, Officer Stevie Jo Banannio and Detective Jason Turner. — Craig Howell

WEIRTON — Weirton officials are responding to a Pittsburgh newspaper article in which a former police officer claims he was terminated by the Weirton Police Department as a result of his role in a fatal shooting in the city in May.

The former officer, identified in the Pittsburgh Post-Gazette as Stephen Mader, was terminated in June. In the article, published Sunday, Mader claims his termination was connected to the May 6 shooting death of Ronald D. Williams Jr. of Pittsburgh. Mader, according to the article, was the first on the scene, but did not shoot Williams, saying he had been attempting to de-escalate the situation.

“At the city of Weirton, we’re prepared to deal in facts, not stories,” Blosser said, adding Mader had been terminated for conduct unbecoming an officer following a series of events. “His termination revolved around three major incidents.”

The most recent of the events was the May 6 shooting incident, but city officials say Mader actually was escalating the situation by using profanity at Williams prior to any weapons being drawn. City officials also said the former officer “froze at the scene, not communicating with the other officers involved.”

That information, Alexander noted, came directly from Mader’s testimony during the investigation of the May incident.

“He raised his voice and used profanities toward Mr. Williams,” Alexander said. “His own statements contradict his story.”

City officials also report Mader’s actions during another incident led to the contamination of a potential crime scene, when, they say, Mader ruled a death incident to be from natural causes when evidence at the scene showed it to be a homicide investigation. The medical examiner’s office, city officials said, later ruled the cause of death to be blunt force trauma to the head, neck and torso region.

In addition, city officials reported an incident in which they say Mader searched a vehicle without probable cause or a search warrant, leading to a man being arrested for disorderly conduct. Those charges later would be dropped as further investigation showed the officer was cursing at the subject’s wife and conducting an illegal search, city officials said.

“This officer was afforded every opportunity,” Alexander said.

According to the Post-Gazette article, a termination hearing was held June 29, but Mader did not attend. Mader was hired by the Weirton Police Department in July 2015.

(Howell can be contacted at chowell@weirtondailytimes.com, and followed via Twitter @CHowellWDT.)