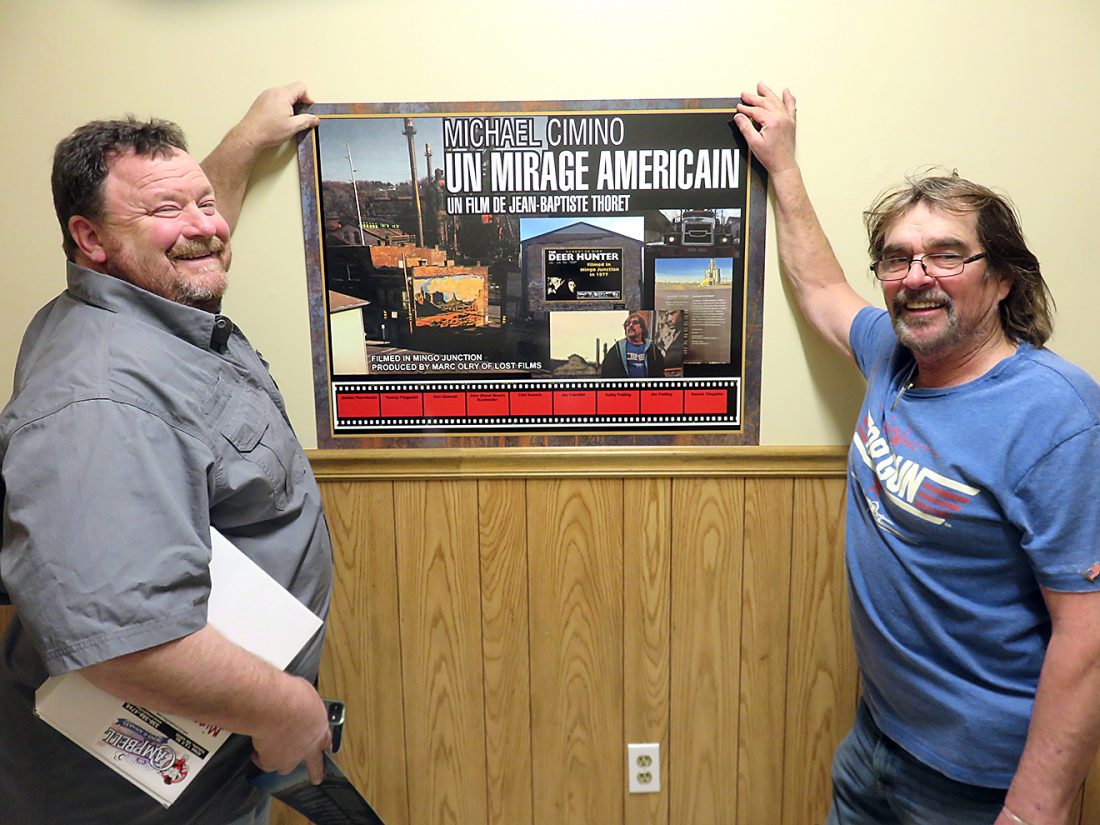 Jeff Campbell, left, and Jim Freiling with a working model of the documentary mural for Mingo Junction -- Janice Kiaski

MINGO JUNCTION — Mingo Junction — no stranger to movies using the town and its residents for filming — has a third movie mural in its future.

This time’s it’s in honor of the newly released documentary “Michael Cimino: Un Mirage Americain,” which French filmmaker Jean-Baptiste “J.B.” Thoret gave a special showing of Saturday to an enthusiastic audience at the Mingo Knights of Columbus Hall.

The surprise announcement included the presentation of a working model of the mural that will be near “The Deer Hunter” mural unveiled at 454 Commercial Ave. in August 2018. The other movie mural in Mingo is “Reckless,” the 1984 film that starred Aidan Quinn and Daryl Hannah and had a steel-town setting.

The mural announcement was made by Jeff Campbell, owner of Campbell Signs in Calcutta, on behalf of the Mingo Business Association with whom he has worked on numerous projects, including designing the movie murals. Sponsorships are making it possible.

That came on the heels of another gift with Mayor Ed Fithen presenting, on behalf of the administration and citizens, a key to the city to Thoret, who came to Mingo Junction in February 2020 to do filming and interviews of people who had a connection to “The Deer Hunter” more than 40 years ago.

It was all part of Thoret’s work on the documentary about Cimino (pronounced chu-mean-o), who won accolades for co-writing, directing and producing “The Deer Hunter.” It won the Academy Award for best picture and best director honors for Cimino, who died in 2016 at the age of 77.

“The Deer Hunter” was filmed in 1977 and had limited release in December 1978 to allow it to be considered for the 1979 Academy Awards. The film had its local premiere on March 15, 1979, at what was then known as Cinema III at the Fort Steuben Mall.

Thoret visited Mingo Junction and other communities two years ago as part of his work on the project and hosted a showing of “The Deer Hunter” at the Parkview Inn in Mingo as a way to talk with local residents who had been involved in it.

He was asked by Jim and Kathy Freiling of the Mingo Business Association to return when it was finished, and he did, accompanied by his sound engineer Julian Brossier.

Their three-day visit last week to the area was a busy one that included stops at the Historic Fort Steuben Visitor Center, the Sycamore Youth Center, the murals, Leonardo’s Coffee House and Indian Creek High School, which they toured and met an exchange student there from France. Thoret lives in Paris.

A private meal Saturday at the Mingo Senior Center preceded the free and open-to-the-public showing of Thoret’s documentary, which is two hours and 10 minutes.

Mingo’s role in it is a good 45 minutes or more and shows town scenes past and current. Locals in it include the Freilings; John “Boom Boom” Buchmelter, who played a bar patron and was in the wedding scene; Orin Diomedi, then owner of Orin’s Auto who fixed the cars used in the movie and helped recruit extras; Noonie Chappano; Tommy Fitzgerald; Bobby Pizzoferrato; Clint Kovach; Jay Giacobbi; and the late Gary McLeish, who sang “Can’t Take My Eyes Off You,” the Frankie Valli and The 4 Seasons hit that was sung by patrons in “The Deer Hunter” bar scene.

Filmmakers Quentin Tarantino, Oliver Stone and John Savage, who played Steven in “The Deer Hunter,” are part of it, too.

Why did Mingo end up as such a big part of the film? Here’s how Thoret answered that for me.

“At first the idea was to make a documentary about Michael Cimino but more precisely I wanted to make a movie about the America that Michael Cimino filmed in the ’70s and ’80s, and his masterpiece was ‘The Deer Hunter,’ and I knew the guy. I spent some time with him. We made a journey with him. He talked to me a lot about American people, the sense of community and so on and because he discovered that in parts in Mingo Junction when he was scouting for ‘The Deer Hunter,’ I wanted to go to Mingo Junction to come to understand this kind of feeling of community. Without that for me, there was no movie.

“I didn’t want to make a classical documentary movie where the guy was born and did some movies and finally died in 2016. I wanted to go on the tracks of Michael Cimino, on the track of his own spirit you know. For him it was this kind of Americana and so I wanted to meet the same kind of experience, and Mingo Junction became the heart of the movie — very, very, very simple.”

When Thoret later addressed the audience, he expressed gratitude for the hospitality extended and said when he first visited he didn’t realize he would meet “so many excellent people.”

He explained that, 10 years ago, he had traveled from Los Angeles to Colorado with Cimino.

“The first thing he said to me was that he was very touched not by the landscape but by the sense of community of the people of Mingo Junction,” he said, noting “it was critical for me to verify that.”

“Without your help, without your friendship, without your time, I could not have done this movie. Absolutely impossible. Without Mingo Junction for me there is no movie, in fact.” Thoret added that Cimino “was dreaming of a kind of America that I finally found right here in Ohio.”

Other movies that were part of the documentary included the $36 million flop “Heaven’s Gate,” “Thunderbolt and Lightfoot” and “The Year of the Dragon.”

John Balzano served as master of ceremonies and Baci Carpico, a trustee of the Knights of Columbus, gave the prayer and led in the Pledge of Allegiance. Bobby Pizzoferrato sang “God Bless America” and later joined the guitar-playing Thoret in singing Creedence Clearwater Revival’s “Bad Moon Rising.”

Balzano offered thanks to the many sponsors and the committee that made the evening happen.

In talking to a few people who were in the documentary and looking forward to seeing it, I spoke with Tommy Fitzgerald, asking what he was anticipating.

“Well, hopefully everybody’s going to have a flashback of a great time in this community and enjoy seeing a blast from the past because we have a display going now that’s showing pictures from the past and then we’re going to go ahead and combine it with where the past took us to currently,” Fitzgerald noted.

Jim Freiling commented that “The Deer Hunter” was Cimino’s “greatest achievement. His major film was this movie. When he was touring around, the people of Mingo really welcomed him and took him around to a lot of sites.”

“I think it’s good for the area,” Noonie Chappano said of the film. “I’m kind of excited to see it,” he said. “I think it’s a good thing for Mingo, not that it’s going to make us grow again,” he added, agreeing that a movie being made in Mingo doesn’t happen everyday.

Orin Diomedi, 87, sat at a table of family and friends, awaiting the documentary’s start. He had gone earlier in the day to the Mingo Senior Center for the dinner, which he said was “very nice and lots of good food.”

“I never dreamed this would all come back to what it is,” he said. “I still can’t understand or comprehend it. You know what? It’s local people helping local people, and we’ve been active in the city business all our lives and that’s what it takes. And you know what, that’s missing today,” he commented.

He was excited to see the film. “It’s history. We’re history from the old timers, the way we got along together, even the way the country was. We lived it. We can enjoy it for what it is.”

Diomedi not only repaired cars used in the movie, but befriended the casting director for “The Deer Hunter,” who asked his help in recruiting 12 guys.

Diomedi took the casting director to a Knights of Columbus picnic attended by hundreds to find who he needed.

Another memory for him was having his dirty ballcap end up being worn in the movie by Robert DeNiro. A member of the movie crew spotted Diomedi wearing it in Paddy’s Diner and said he’d like to have it for the movie.

“I gave them the hat but I couldn’t get it back. I tried. We did all their service work. It was like people helping people. That was the name of the game back then, no matter who you were,” Diomedi said.

Thoret and his sound engineer left the area Sunday, their next destination Las Vegas where they were to begin work on a documentary about the homeless who live in the underground tunnels there.

Hard-won rights suffer a setback for some women