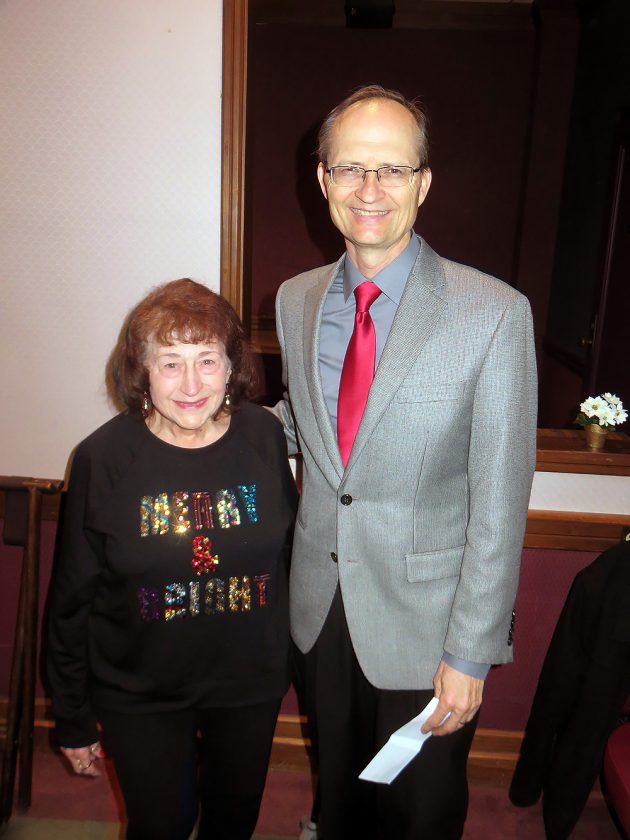 STEUBENVILLE — Members of the OFWC/GFWC Woman’s Club of Steubenville are on winter hiatus with no meetings scheduled for January or February.

When they do gather for the next noon luncheon and business meeting at Froehlich’s Classic Corner in Steubenville, it will be March 7 with Flora VerStraten-Merrin providing the program on Betty Park in her capacity as the organizer of Friends of Beatty Park, which continues efforts to bring improvements and programming to the facility in the city’s South End.

The club ended the 2021 calendar year on a festive and generous holiday note, with Santa Claus making a surprise appearance at the Dec. 6 meeting to treat club members and guests with a box of chocolates and photo opportunities.

The organization, meanwhile, played Santa Claus itself, presenting guest speaker Bobbyjon Bauman, director of the Sycamore Youth Center, with a check for $1,000 to the nonprofit that operates under the umbrella of the Ohio Valley Youth Network.

An assortment of gloves, hats, scarves and socks collected by club members were to be donated to the Center of Hope Friendship Room in Steubenville.

Special music at the meeting was provided by Pamela Bauman, playing the flute, and Harding Middle School eighth-grader Anthony Pearce playing a selection on the guitar.

A native of Wisconsin, Bauman shared how his Christian faith journey to serve the Lord and serve others included studying at the Reformed Theological Seminary in Jackson, Miss., teaching students in difficult and in poverty circumstances in inner-city schools in Houston; being a youth worker in New Albany, Miss.; and doing ministry work back home in Wisconsin.

“God gave me a heart to reach out to everybody and anybody in need,” Bauman told the club members during his presentation.

An opportunity nearly 10 years ago brought Bauman to Jefferson County where he served as youth minister at Starkdale Presbyterian Church. That led to starting the Sonshine Bible Club in 2013 at First Westminster Presbyterian Church and reaching out to inner-city youth.

“The Lord blew the doors off the place, getting more than a hundred kids, so many we had to split it into two days, Monday and Tuesday, but the thing that I kept hearing was people saying there’s nothing for kids to do after school if they’re not involved in sports,” Bauman commented “It was kind of a burden on my heart. I thought maybe we could start a youth center Monday through Friday and give them something positive to do.”

That was about three and a half years ago when the former Sycamore Tree Church building at 301 N. Fourth St., was vacated and ultimately deeded over at no cost by the United Methodist Church East Ohio Conference to the Ohio Valley Youth Network, under whose umbrella the Sycamore Youth Center operates.

The center underwent improvements and each year sees continued growth, according to Bauman.

“Now we have 51 after-school classes Monday through Friday,” Bauman said of the free offerings. “The Lord has grown it so much that now I am working with more than 80 volunteers each week,” he said, likening the center’s growth to an airplane being assembled as it is taking off.

Bauman explained to the club about the Christian-based Valley’s Got Talent competition and other events the center hosts.

“Sometimes I get asked the question — who are we reaching out to? Honestly, everybody — we have homeschooling kids from families of 12 and then kids just literally roaming the streets and in very difficult circumstances. One man said to us you guys are kind of like my family and that’s what we’re trying to be in a sense, a source of love and warmth and comfort for kids who don’t have that in their own homes,” Bauman said.

The program included a brief video about the center where participants offered testimonials about how it has changed their lives.

Memorial Day services set for Friday and Monday in Adena ADENA — West Elementary School in Adena will be the ...