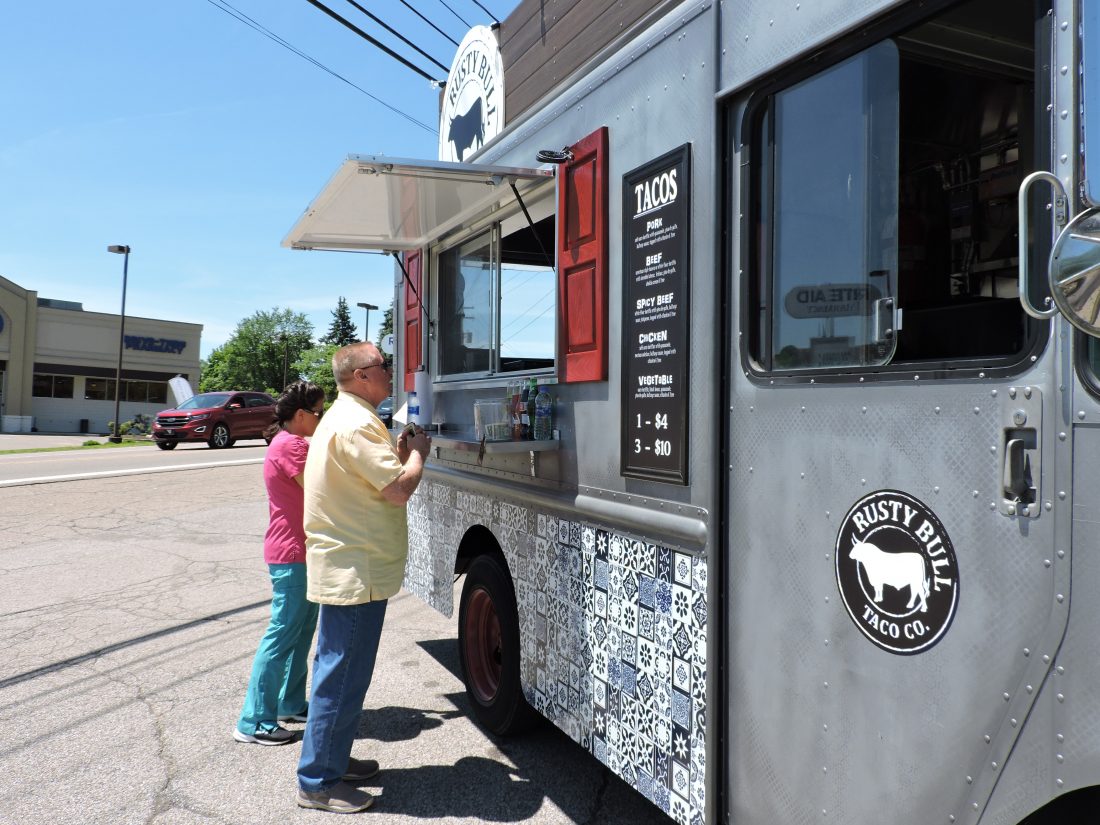 TACO TRUCK — Area residents give their order during a recent visit to Weirton by the Rusty Bull Taco Co. food truck. The truck began operations a few weeks ago, expanding the presence of the Toronto-based restaurant throughout the Ohio Valley. The truck offers a pared down menu, with a selection of five tacos and beverages. -- Craig Howell

WEIRTON — An area restaurant has hit the road to provide residents from across the Ohio Valley with a taste of its menu.

Rusty Bull Taco Co. first opened its doors in Toronto three years ago, and now the restaurant is growing its presence with a mobile operation, recently launching a food truck and taking it to communities throughout the area.

“I just wanted to be able to run around the whole Ohio Valley and expand our presence,” owner Mark Frankovitch said.

Frankovitch explained he purchased the truck in the early spring, spending a couple of months getting it ready before getting it on local streets a few weeks ago.

The menu is simple, with five types of tacos — pork, beef, spicy beef, chicken and vegetable — offered, along with beverages.

“It’s a bit condensed from the restaurant,” he noted.

The restaurant, which continues to operate, offers taco salads, nachos and other dishes.

Even though the truck has only been on the road for a few weeks, Frankovitch said he has noticed several repeat customers.

He also noted the transition to the food truck operation hasn’t been much of a challenge, as his staff is used to working in small spaces. The Rusty Bull restaurant, he explained, was built out of a former car wash.

As the food truck sets up at different locations, Frankovitch said those interested can check out Rusty Bull’s Facebook page to find out where and when the truck will be from day to day.

The food truck also will be available to cater parties and events,” Frankovitch noted.

Frankovitch plans to operate the food truck during the summer and fall, possibly going longer depending on the weather.