Off to a good start on the job

Local man recognized for his work at hotel 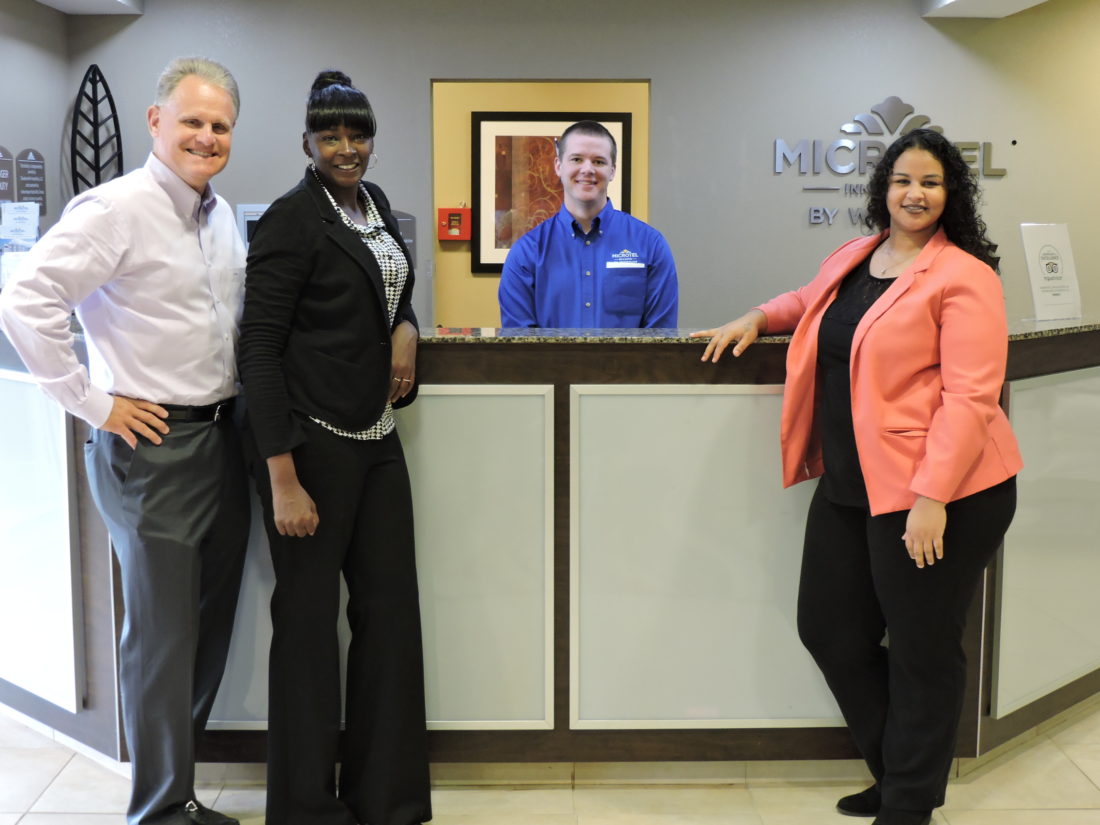 Patrick Scott of Steubenville has been recognized by the corporate leadership of the Wyndham Worldwide Corp. for his work in guest services at the Microtel Hotel in Steubenville. Joining Scott at the front desk were, from left, Bill Williams, owner of the Steubenville Microtel; Tasha Robinson, assistant general manager; and Countess Lytle, general manager. — Dave Gossett

STEUBENVILLE — Patrick Scott has only been on his job in guest services at the Microtel Hotel for three months and he has already come to the attention of corporate executives.

Scott was recently working the front desk at the hotel when a gentleman spent time in the lobby watching an Alabama football game.

“He told me he is a big Alabama football fan and we chatted during the time he was in the lobby,” said Scott, who works at the hotel part-time in addition to taking business administration classes at Franciscan University of Steubenville.

But the conversation apparently impressed George Harding enough that he sent an e-mail to the corporate headquarters in New Jersey.

“I had the pleasure of interacting with one of your front desk staff today. My wife and I are staying at the Steubenville Microtel and I am very impressed with Patrick Scott. I have been down in your lobby for the past four hours watching a football game and have personally observed the way this young man answers the phone and interacts with your customers. He does a great job and is very personable. You should be proud of this young man and his excellent interpersonal skills. My wife and I are on our 40th anniversary trip and will soon be going to the New England states. We are both personally impressed with your hotel chain and are now convinced we will stay at Microtel. Very clean hotels,” wrote Harding.

That prompted a message from the chief executive officer of the Wyndam Worldwide Corp., Aly El-Bassuni to Bill Williams, owner of the Steubenville Microtel.

“Patrick appears to be making quite an impact on your guests and creating loyal fans to the Microtel brand. I will call Patrick today and personally thank him for delivering such great service,” said El-Bassuni.

“Wyndham is the largest hotel chain in the world. And Patrick Scott put the Steubenville Microtel on the map of the corporation. He is a great person to have here in our family and I am very proud of him,” declared Williams.

“We don’t call people who work here employees. They are associates or team members. We are a cohesive team. That is why we are successful in the Steubenville area. This gentleman and his wife could have stayed anywhere, but they chose the Steubenville Microtel for their lodging and Patrick made an excellent impression on the couple,” continued Williams.

“I gave Patrick a $100 bonus and a $50 bonus to his parents, Joan and Shawn Scott, for raising such a fine young man. I have always believed the

hospitality business is about being hospitable, and we work very hard to make the experience of staying here the very best. This shows we have a very good team here,” stated Williams.

“I am very proud of Patrick and the entire team here. Patrick was doing his job that day and didn’t expect any special recognition. But Mr. Harding watched Patrick do his job and enjoyed talking to him that afternoon. This is a real success story. This is one of the reasons I chose Steubenville for my latest Microtel Hotel. This is about people coming to the Steubenville community and this hotel,” concluded Williams.

(Gossett can be contacted at dgossett@heraldstaronline.com.)