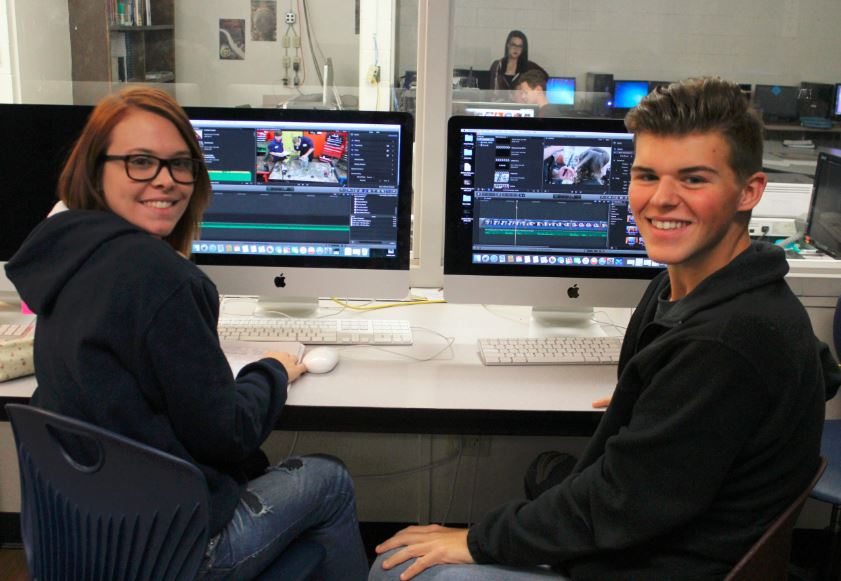 Multimedia and design students Samantha Giska and Justin Saltsman prepare commercials showcasing the Jefferson County Joint Vocational School. The commercials are being created in partnership with Em-Media of Steubenville and will be aired in the next few weeks. — Contributed

BLOOMINGDALE — Students in Cody Larue’s multimedia and design class at Jefferson County Joint Vocational School are helping to promote the site after teaming up with Em-Media Inc.

The Steubenville-based advertising and marketing agency has been working with students to produce commercials, billboards and a recruitment video to market the school. More than a dozen seniors in Larue’s class have been responsible for all aspects of production, from filming to editing the 15- and 30-second advertisements, while his 28 juniors are involved with the recruitment video.

“We are partnering with Em-Media,” Larue said. “The students are getting a real-world production experience and are actually doing projects that will be seen by the public.”

He added the billboards already are displayed in the Steubenville, Wintersville and Bloomingdale areas, while the commercials should begin airing in the next few weeks. The concept highlights individual programs to show what the JVS has to offer.

Michael Emmerling, account executive for Em-Media, said the agency was mentoring the students throughout the process.

“We’re bouncing off ideas and essentially guiding them,” Emmerling said. “We will discuss ideas and take feedback from them. I believe they’re a great group of students. It’s been wonderful, and it’s nice to have them show off their abilities for the public to see.”

Larue noted the multimedia program includes up-to-date equipment that is used in the real world, while the experience students gain also prepares them for a future career.

“We wanted to showcase the students’ abilities,” he added, saying his class was equally excited to take part.

“I feel like it lets me explore my creativity toward the project,” added senior Justin Saltsman.

Meanwhile, Larue said the project is just one aspect of the multimedia program.

“Everything we do is encompassed under our mock broadcast company, JVTV,” he noted. “We are moving into it after we complete the commercials. (The students) have created a logo, animated intros and basically they are designing everything from head to toe.”

A weekly news program is slated to air starting in November and students will eventually develop their own television shows and short films.

“We’re planning to stream online on YouTube and other sites and we’d like to eventually do a live web stream from their homeschools and other events,” he noted.