STEUBENVILLE — The Brooke-Hancock-Jefferson Metropolitan Planning Commission learned the contractor for the new Ohio River bridge has been chosen and was updated Wednesday about other road projects.

Mike Paprocki, BHJ executive director, said officials with the West Virginia Department of Transportation have advised him Flatiron Constructors Inc. of Bloomfield, Colo.m has been chosen and a contract for the estimated $131 million project is being negotiated.

Flatiron was one of three found to be the most qualified after submitting qualifications to the state Department of Transportation. The other two were the American Bridge Co. of Coraopolis, Pa., and Walsh Construction Co. of Chicago.

Among Flatiron’s past bridge projects are the John James Audubon Bridge which stretches 3,186 feet across the Mississippi River near Baton Rouge and the St. Anthony Falls Bridge in Minneapolis, a 1,216-foot-long, 10-lane concrete bridge.

Paprocki said the type of bridge that will be built and start date haven’t been announced, but the completion date has been set for March or April of 2022, about nine months later than previously projected.

He added he’s learned the Ohio Department of Transportation will acquire right-of-way for the affected property in Ohio, while the contractor will be charged with that task in West Virginia.

Roxanne Kane, ODOT’s liaison to BHJ, said the department has acquired right-of-way for all but one parcel.

The span is to extend from state Route 2 about a mile south of Wellsburg to Third and Clever streets in Brilliant.

In 1998, BHJ named a new Ohio River bridge its top transportation priority, citing the advancing ages of the Market Street and Fort Steuben bridges, the latter since demolished, and the conclusion the Veterans Memorial Bridge wouldn’t be adequate to serve projected traffic levels.

The second priority was improving access to the Veterans Memorial Bridge.

Crews with Shelley and Sands of Rayland have begun work on that $9.9 million project, which involves new lanes leading from state Route 7 to the bridge and the Steubenville Marina. Both additions are intended to prevent vehicles from being backed into the highways through lanes during peak traffic periods.

Plans call for the short turn lane from the highway onto University Boulevard to be replaced by a 900-foot-long lane extending from an area near Garfield Elementary School and through the property once occupied by the Ohio Valley Steelworker Statue to a new traffic signal on the south side of University Boulevard.

Kane said railroad officials since have expressed concerns about the project disrupting traffic on the railroad bridge and they and ODOT remain in negotiations, which could delay the work.

She said some residents near Brilliant and in Wellsburg have complained of their homes shaking during blasting. She said the effect is from sound, not the ground, and probably is due to crews hitting harder rock recently. But Kane said ODOT will set up a seismograph at the affected properties to ensure the blasts don’t exceed recommended levels. She said such a test has been arranged for one Wellsburg home at the request of state Sen. Jack Yost, D-Wellsburg. 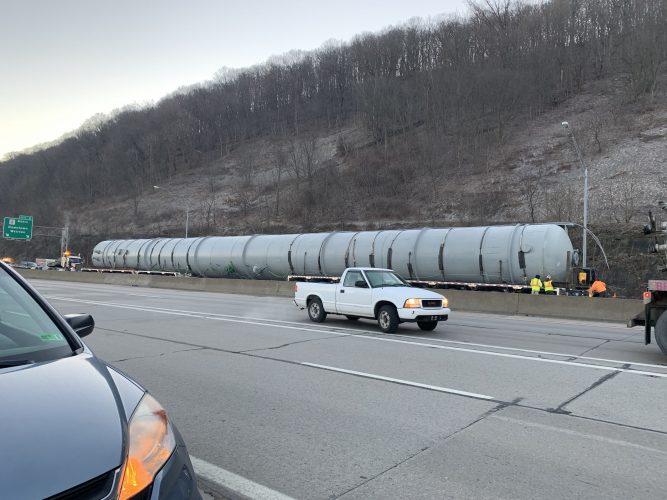